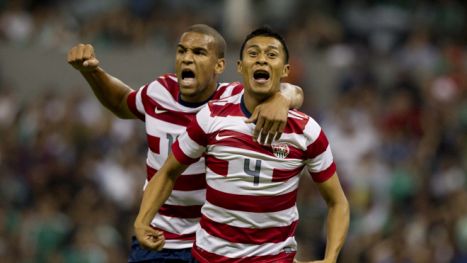 Despite the pleasant moniker bestowed upon these contests by FIFA, international “friendlies” between the United States and Mexico are usually about as chummy as a night out with Drake and Chris Brown at a New York City night club… meaning you’re pretty much guaranteed to see more than the necessary share of testy exchanges and hostile attitudes.

It’s a rivalry game that needs no official implications to reach full intensity, but when historic streaks are noticeably on the line (namely Mexico’s astounding undefeated 23-0-1 all-time record against the United States when playing on Mexican soil), a good result certainly becomes all the more precious for both sides. Yet… after seeing the miles tall order achieved and the ages old record officially blemished, I couldn’t help but wonder if winning this game was really the most valuable thing Team USA should be taking away from their experience Wednesday night. Sure, a win as redeeming as this one has to feel really, really good, but I have to think the Americans came away with something even more valuable than a 1-0 result.

With Jurgen Klinsmann seemingly hand cuffed by the club responsibilities and resulting absence of some of his most important national team players, this match provided a unique chance to season (and season in a hurry) the younger, greener talent on the United States’ roster (without the threat of mass criticism from fans and pundits who want to see the USA’s “best” foot forward every single game).

This being one of the few friendlies that could simulate all the elements and feelings of a genuine international tournament match, it gave Klinsmann and company a practice run of the vital World Cup qualifying games that will unavoidably feature similarly hostile crowds and equally difficult conditions (high altitude, inconvenient scheduling, etc.). Even if Team USA had lost/drew this game to El Tri, adding this type of match to Jose Torres’, Geoff Cameron’s, Brek Shea’s, and many others’ international resumes without having to consider any consequences of an actual big time competition is huge. It builds confidence and composure deep within the roster, and ultimately strengthens the most important sector in the United States’ current squad… its young, on the verge footballing talent.

Getting this game against a top quality international side (granted one with a few key players missing because of club team conflicts) at their infamously unfriendly home field was much more than a chance to end a decades old record of futility, it was a chance to begin the process of catching up to a neighboring country that has quickly become a genuine international dynamo. The harder Team USA can make their road now (in mere preparation for the World Cup qualifiers/finals competition), the better they will be when the games actually matter.

To put it in perspective: I’ve always heard that the EURO tournament may be a harder competition to win than the World Cup, the argument simply being that since the majority of the world’s best teams are in Europe, having a competition where more of them are able to qualify creates a deeper, more challenging final tournament pool. Whether or not this is actually true (because the World Cup has its own set of unique challenges… like distant locations and opponent unfamiliarity), the fact that these European teams get to play in an exclusive tournament with a high concentration of top ranked teams has to give them excellent experience that other regions largely miss out on.

The Gold Cup is decent, don’t get me wrong, but it simply can’t provide the same experience that being a part of the EURO’s can… the overall strength of competition is just not present. That’s why having Mexico become as good as they are currently can only help Team USA in the long run, giving the US an accessible sparring partner that consistently competing against will force them to get better.

It may be frustrating to play against Mexico in the near future and beyond, in fact I know it will be, but daunting competition is the only way to truly prepare for international success.