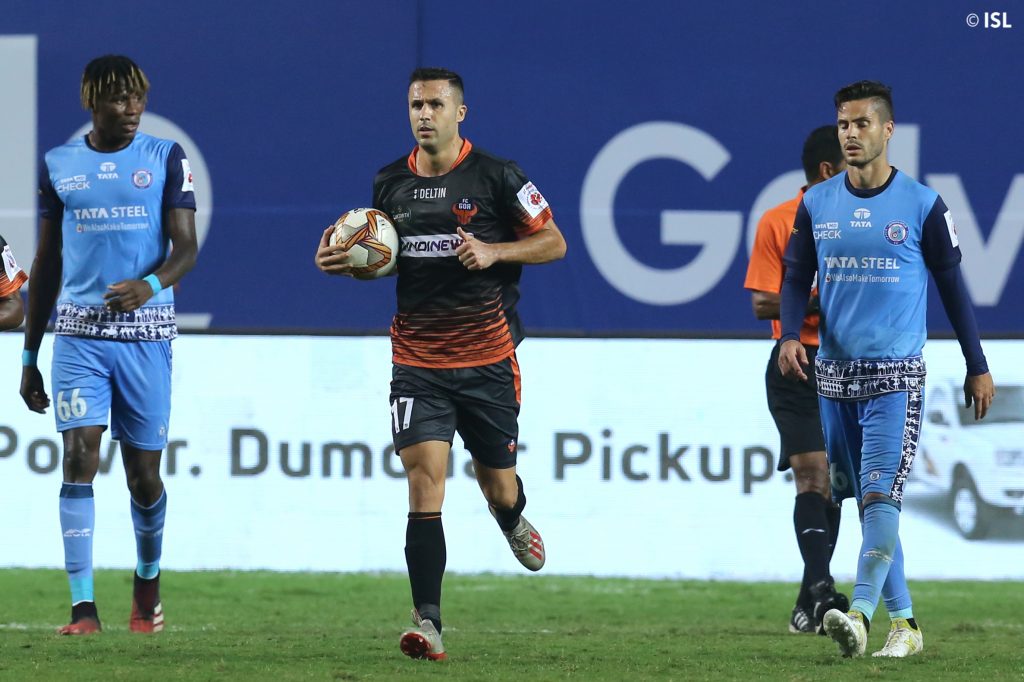 The last Indian Super League clash before Christmas saw 5th-placed Jamshedpur FC take on FC Goa, who were two spots below them in the table. Owen Coyle’s men were buoyant after winning their last match and remaining undefeated since matchday 1, but things were a bit different in the Gaurs’ camp, as they had lost each of their last two matches. A crucial clash for both sides was in store, and here’s what we made of it:

The match was a keen tactical affair, but there was no clear opening until the 33rd minute when Aitor Monroy delivered a free-kick to the far post, where Stephen Eze acrobatically cushioned the ball in with the outside of his outstretched right foot.

Jamshedpur continued to look good in the second half, and they came very close to scoring in the 52nd minute when Isaac Vanmalsawma’s cross missed everyone in the centre and reached Aniket Jadhav, who created an opening after taking a few touches, but his effort was parried over the crossbar by Mohammad Nawaz. The resultant corner was cleared, and eventually, it allowed Igor Angulo to race through on the left at the other end, but he failed to hit the target with his effort. Goa had a huge chance to equalise in the 63rd minute when Alex Lima brought James Donachie down in the box. Igor Angulo stepped up, and unsurprisingly, he made no mistake.

Nerijus Valskis came extremely close to restoring his side’s lead when he sent an absolute ripper towards the top corner from a free-kick, but it clipped the crossbar and came back out. Jamshedpur thought that they had scored in the 87th minute when Alex Lima let fly and struck the underside of the crossbar, causing the ball to bounce below it before spinning away from the net. Replays showed that the ball did go in, causing further outrage in the home side’s ranks. FC Goa snatched victory in the 95th minute, as Igor Angulo bundled a corner home to grab a late winner for the Gaurs.

What a comeback . Superb

Jamshedpur FC hadn’t lost a match since their opening clash, but they hadn’t managed to win too many either, at least until last week. This was a solid performance to build on that, as the Men of Steel matched FC Goa throughout the match and arguably even bettered them in the balance of things. Their first-half performance was particularly encouraging, as they defended with good discipline and created a number of decent openings before taking a deserved lead. Their opponents were clearly the hungrier team in the second period, but Jamshedpur hung in well and continued to threaten on the break early on. They came very close to doubling their tally on two occasions as Aniket Jadhav, Nerijus Valskis and Alex Lima rattled the crossbar (Lima’s effort crossed the line too), but the second goal kept eluding them and Goa’s equaliser meant that they had to try and score again.

It was a cruel and undeserved defeat for Jamshedpur FC with the final blow being delivered in the very last minute, but they have to accept it and move on.

A Poor Plan, but a Lucky Escape

FC Goa suffered two very disappointing defeats in their last two matches, and the most recent one must have been especially bitter for Juan Ferrando, who evidently got his team selection wrong. It’s hard to make a case for his team selection tonight either, as Lenny Rodrigues surprisingly missed out, while Jorge Ortiz was fielded in an unfamiliar number 10 role. All of that combined with Jamshedpur’s direct approach meant that Goa looked quite bland in the first half, managing just one shot on target. One of the reasons for the Gaurs’ incoherence in the final third perhaps was the positioning of Brandon Fernandes and Jorge Ortiz. So, when Juan Ferrando restored the two forwards to their more usual positions in the second half, Goa started looking a lot better all of a sudden and they created some decent chances. In the end, they needed a centre-back to get forward and win a penalty to equalise, but after that, they looked much likelier to grab a winner. After surviving a scare from Alex Lima, they (rather fortunately) managed to do just that in the last minute of stoppage-time, stealing three points in the process.

#FCGoa needed that win and deserved that BIG slice of luck. Feel for Jamshedpur. #JFCFCG #UTG

FC Goa’s recent losses could in-part be attributed to the fact that their main talisman blanked, but that was not the case tonight. Igor Angulo was back on the scoresheet, but he missed a number of chances to open his side’s scoring before finally converting from the penalty spot. He missed a couple of headed half-chances in the first period and skied his effort when he only had the keeper to beat from a difficult angle in the second period. Those misses can be taken positively, though, because they at least indicate that the Spaniard was goal-hungry tonight. He ended up winning the match for his side in the last minute, although he didn’t seem to know too much about the ball as it struck him. https://twitter.com/mohitsharma13__/status/1341774822108323840 The ex-Athletic Bilbao forward scored from both of his shots on target, adding 24 touches, 4 duels won and a key pass to that too. Clinical brilliance from Coro’s worthy successor.

Jamshedpur FC’s six-game unbeaten run comes to an end with that defeat, which sees them slip to 6th and allow FC Goa to take their previous spot – 5th place. Stephen Eze scored his second goal of the season at the same end of the same stadium as his first, but it was Igor Angulo’s first penalty goal in India and late winner which take him two goals clear at the top of the scoring charts that stole the show. Jamshedpur FC take on Bengaluru FC next Monday, while Goa will be a part of 2020’s last ISL match when they will come up against Hyderabad FC. Stats courtesy Sofascore.com
Join our Telegram channel to stay up to date on the latest in marketing