Results, goals, and fine spectacle in Switzerland! At the Letzigrund Stadium of Zurich, the field which will host (among others) the Italy matches vs. Romania and France this summer, Roberto Donadoni’s team took Portugal out for a little joyride on Wednesday night. Only, the evening didn’t quite turn out the same way for each passenger: while the Azzurri broke a few speed limits without getting caught, honked at the pretty ladies on the sidewalk, and otherwise had tons of fun… Portugal crashed and burned. Quite simply. Scolari will have to spend quite some time at the repair shop this week…
.

For an international friendly, this surely was a heartfelt match for Donadoni and his boys. Sure, there were a few defensive mistakes here and there, but the Azzurri team in its entirety displayed every bit of progress that their work with the Italian coach has produced this past year. Good teamwork, good tactical set-up, good runs, and making yourself available for your teammates. All this despite the important absences the team was facing tonight, such as the irreplaceable likes of Buffon, Gattuso, Camoranesi, and Materazzi.

For this match, Donadoni even altered his usual tactics (although not by much) by switching from a 4-2-3-1 to a 4-1-4-1 formation, with Daniele De Rossi in front of the defensive line and 4 offensive midfielders (Raffaele Palaladino, Andrea Pirlo, Massimo Ambrosini, and Antonio Di Natale) in support of the lone striker Luca Toni. The Italian coach has been a traditionalist with his one-striker formation ever since he took over (the only instance in which the Azzurri played with 2 strikers ending up in defeat, 3-1 at the hands of France in Paris), so there was no reason to change tonight.

On the other end, Portugal intended to take the match seriously too, fielding stars like Deco, Maniche, Quaresma, and wonder-boy (turned captain for the occasion) Cristiano Ronaldo. These last two notably, much like their role at Porto and Manchester United respectively requires, were exhibiting a strong presence on the wings and keeping the Italian defence on their toes, with their speedy runs and sudden accelerations. Fortunately for the Azzurri however, the Italy backline was keeping things under a tight lock tonight (in particular Massimo Oddo on the right wing, who made his presence adequately known both on the offensive and defensive fronts). For a Portuguese team who is still looking for an adequate replacement for Pedro Pauleta’s lethal goalpoaching abilities (Ariza Makukula didn’t particularly shine tonight), the Lusitans may very well be able with ball control and technique, but in terms of finishing they still lack a bit of quality, something which was fairly evident during the entire 90 minutes tonight.

Contrary to their opponents, the Azzurri don’t need to worry about putting the ball in the net as long as they have a certain someone named Luca Toni. Is it really that surprising to see the ex-Fiorentina striker put his name on yet another international goal tonight? But let us proceed in order.

Indeed, before the Bayern Munich giant went to work, Italy were the first to find the back of the net as early as minute 5: Zambrotta’s delightful cross forward for Pirlo found the chest of the AC Milan midfielder, inside the box. Pirlo put the ball back on his left foot, and slammed powerful shot inside the top left corner of Ricardo’s goal, but unfortunately Swiss referee Kever had stopped play. While every camera angle available confirmed that Pirlo’s had been indeed a chest touch, the man in black had signalled a handball thus nullifying the goal.

As this was only a friendly match, Pirlo didn’t even try protesting the call too much, and instead continued playing, soon imitated by the rest of his teammates. The Azzurri continued pushing forward, keeping most of the ball possession. What followed were a couple of good scoring opportunities, one for each side: Di Natale on a spot pass by Palladino (parried away by Ricardo), and Makulula on a long-range effort ending narrowly wide (with Amelia keeping a close watch). This before Italy finally went ahead on the last play of the half.

With Fabio Grosso (on for the injured Gianluca Zambrotta) pushing down the left wing, the Lyon wing-back’s low cross was missed by both Ricardo Carvalho and the goalkeeper, allowing Luca Toni to slip behind at the 2nd post and put the Azzurri ahead. 1-0 Italy, and based on the first 45 minutes no one could claim it was a steal.

At the restart, Scolari put on three new faces (P.Ferreira, F.Meira, and Nani on for Caneira, Petit, and Deco) while Donadoni’s team continued unaltered. Also unaltered was the Azzurri’s drive towards attacking the Portuguese net, and the first 5 minutes of the second half gave rise to two really great chances for them. On the first, a beautiful forward pass by Pirlo found Di Natale inside the box, the Udinese striker laying the ball off to Toni, who found the save of Ricardo and then missed the open-net header rebound. On their second chance however, Italy doubled their lead with a little help from lady luck.

A deflected ball from the Portuguese defence landed to Pirlo on the edge of the box, and the AC Milan midfielder took a half-volleyed shot which found its way into the net, eluding Ricardo’s vigilance. This wasn’t without a little deflection-help from Fabio Cannavaro, and the Real Madrid center-back will certainly be claiming the goal, the second in his international career. 2-0 Italy.

In the following 10 minutes, ensued a true one-team show during which Italy litterally pushed Portugal to the ropes, and repeatedly got through their already shaky defensive set-up. Palladino found Di Natale inside the box once again, and Ricardo had to summon his best reflexes to keep the ball out. 5 minutes later, a marvelous cross from the right by Cannavaro found Palladino unmarked, and the Juventus winger executed a beautiful chest control before slamming a hard left-footer straight onto Ricardo, who deflected the tightly angled shot… onto the crossbar!

This was truly becoming Italy’s game, with Donadoni’s team clearly getting the most chances to put the victory on ice. Toni made way to give Marco Borriello his first international cap, and the Genoa striker really got to work to reward the faith put in him. Ironically however, Portugal found a way back into the game with the first real mistake of the Azzurri defense: Nani’s low cross from the left was missed by Hugo Almeida, but turned into a perfect assist for a completely unmarked Ricardo Quaresma. Hard shot into the top right corner, and 2-1. 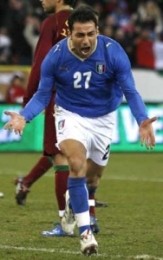 Ultimately though it didn’t take Italy very long to find an adequate reply, and put the game out of reach once again. Fabio Quagliarella (who had come on for Palladino just over a minute) found the winning close-range finish to a beautifully orchestrated Azzurri move, started with Ambrosini’s cross from the left, followed by Di Natale’s acrobatic save back to the edge of the box, and concluded by Perrotta’s header-assist for the ex-Sampdoria striker. 3-1 Italy, in style!

The last portion of the match had little left in the way of goals, but plenty in the way of emotions. The Italians came close to goal nº4 a few times, and Cristiano Ronaldo got to work on a few trademark free-kicks of his, finding Amelia ready on the trajectory every time. At the end of the evening, the referee brought an end to a very good 90 Azzurri minutes, during which Donadoni’s team proved without the shadow of a doubt (and against an opponent which will feature as a sure protagonist in Austria/Switzerland this summer) that they are still the World Cup Champions! Opponents beware!
.

.
Marco Pantanella is the chief editor of Soccerlens, and also the author and editor of his own blog mCalcio.com