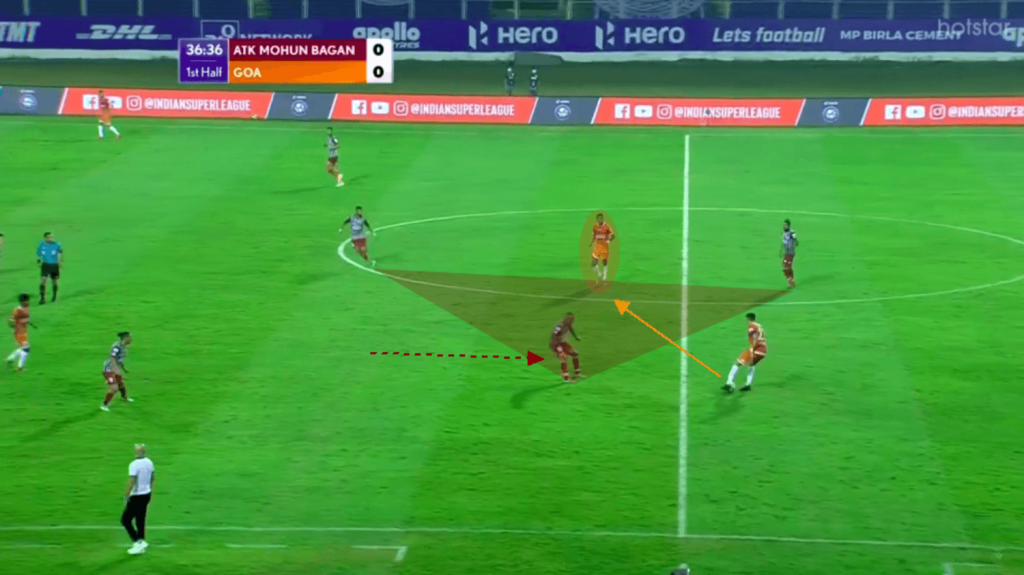 We were treated to a huge clash between ATK Mohun Bagan and FC Goa last night, which ended in a 1-0 victory for the home side. The match wasn’t the most explosive in terms of goalscoring opportunities, but it was certainly filled with tactical intrigue. Here’s our analysis of the match:

ATK Mohun Bagan went for a 4-1-4-1 – a slight deviation from the 4-4-2 they deployed last time out. Arindam Bhattacharya kept his place in goal, with Pritam Kotal, Sandesh Jhingan, Tiri and Subhasish Bose in front of him. Carl McHugh was the holding midfielder, while Pronay Halder and Jayesh Rane operated in front of him. David Williams and Manvir Singh provided width, with Roy Krishna leading the line. FC Goa fielded their familiar 4-2-3-1, with Mohammad Nawaz in goal and Seriton Fernandes, James Donachie, Ivan González and Saviour Gama making up a familiar defence. Lenny Rodrigues partnered the returning Edu Bedia in midfield, but there were some interesting selections up ahead, as Alexander Jesuraj and Seiminlen Doungel were the two wingers and Alberto Noguera operated as a playmaker. Unsurprisingly, Igor Angulo was the lone striker.

Antonio López Habas didn’t cause too many shocks with his side’s playing style, which relied on a solid defensive shape coupled with counterattacks to threaten the Goa goal. The former was a 4-1-4-1, as discussed previously, and the Mariners maintained it with discipline whenever they didn’t have the ball. However, the major surprise came in ATK Mohun Bagan’s rather unexpected press, which didn’t allow FC Goa to have too much time in their build-ups. Roy Krishna was the sole striker as aforementioned, so he was the one who initiated the press. Generally, this forced the player in possession to play the ball out wide. This is where the winger joined the press (in this case, David Williams on the right), and with Krishna closing down from the centre, Goa were mostly forced to punt the ball high and long, destroying their build-up. It was an exact mirror image on the left-wing too, where Manvir Singh pushed forward. In cases where Krishna chose not to press and the ball went to either side of him, one of the two central midfielders pushed forward, with Carl McHugh filling their place in the midfield line. In this other cases, the ball went on the left, so Jayesh Rane pushed up, as you can see below. Antonio López Habas and his coaching staff had clearly identified a weakness in Mohammad Nawaz’s footwork, so Roy Krishna was asked to close him down rapidly whenever he got the ball. Therefore, the keeper didn’t have too much time on the ball and had to go long quite often, which explains why he completed just 3/10 of his long balls. FC Goa weren’t even spared when they had goal kicks, as ATK Mohun Bagan positioned their forwards in such a way that the keeper couldn’t possibly go short, as is evident above. In the rare cases when ATK Mohun Bagan decided not to press, they laid traps in midfield to regain possession. As you can see above, they didn’t try to mark everyone man for man, instead, allowing the Goa midfielders to find pockets of space, but staying close enough to close them down very quickly if they received the ball. Then, when they did receive the ball, the ATKMB midfielders would spring into action. If there was another free Goan player, he too would have a trap surrounding him. The end result was the same – a turnover of possession in ATK Mohun Bagan’s favour. In this manner, ATK Mohun Bagan prevented FC Goa from having too much time on the ball even in their own half and cut off their attackers from the rest of the team. This worked a treat in the first half particularly, when Goa just managed a solitary shot.

Juan Ferrando knew that he would need to change a fair few things at half-time, and although he didn’t change his personnel, he did make a few tweaks to his system. The first one saw Alberto Noguera drop a lot deeper than usual at times and cross ATK Mohun Bagan’s midfield line. Here, he had a lot more space to work with, and with the full-backs pushing up, he was able to link up with them and break past the ATKMB midfield. Further, ATK Mohun Bagan slowly started to tire out due to the incessant pressing and humidity. So, some gaps started to appear in their midfield, which Goa looked to exploit. In the second half, FC Goa were indeed able to break past ATK Mohun Bagan’s midfield line more often and get the ball into crossing positions. However, ATKMB’s back-four stayed in line, and were successful in repelling the crosses as they only came up against a sole striker in Igor Angulo. The likes of Doungel and Romario weren’t good in the air, while Noguera couldn’t make a late run into the box because he usually dropped deep as aforementioned. Towards the end of the match, Goa switched to a back-three to find a goal. While they were able to threaten the ATKMB goal late on when looking for an equaliser, this tactic rather worked against them when their defence was caught out in the build-up to the penalty, as you will see below.

As always, ATK Mohun Bagan’s goal-threats came from counterattacks. Whenever ATK Mohun Bagan were able to turn the ball over in midfield, they looked to go long and catch out Goa’s stretched defence if there ever was an option. Here, Carl McHugh has just received the ball after his teammate regained possession, and he sees that Goa’s defence is concentrated on the right, so he sends a long diagonal ball towards David Williams. With a fair amount space to work with, Williams did brilliantly to control the ball and drive inside. The stretched Goan defence couldn’t stop him, but this time, the post bailed them out. In fact, the build-up to the match-deciding penalty was also a counterattack, as ATK Mohun Bagan broke past Goa’s midfield and got into a 3v3 situation. This eventually led to Roy Krishna going down in the box, and a goal was almost guaranteed thereafter.

ATK Mohun Bagan are back on track after pulling off another Antonio López Habas trademark 1-0 victory complete with a goal in the last 10 minutes. The Spanish manager got his tactics spot on with the press, which seemed to catch Juan Ferrando off guard, especially in the first half. The second half could have swung in any favour, and in this case, it was ATKMB who got a deserved victory.