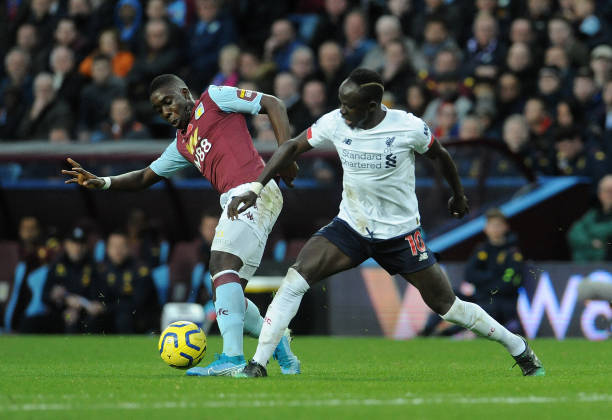 Aston Villa narrowly missed out on the chance to secure their biggest league victory of the season on Saturday.

The Midland outfit were a goal up against Liverpool until the 87th minute, only to eventually succumb to two late goals.

Trezeguet opened his Villa account in the 21st minute after putting John McGinn’s free-kick beyond Alisson’s reach, and the hosts held on for as long as they could.

However, they were made to wait for their fourth victory of the campaign after Andy Robertson arrived at the back post to head Liverpool level after Sadio Mane’s cross caught the hosts unaware, and things got worse when the Senegalese grabbed a winner from a corner in the 94th minute.

The defeat hurt given that Dean Smith’s men were impressive for the majority of the game, and Premier League legend Ian Wright reckons they are going to be fine going forward.

The former striker also singled out Marvellous Nakamba and Trezeguet for praises, and the duo will hope to keep impressing going forward.

“Villa were brilliant today, like the manager said, they were very disappointed because it was a lack of concentration,” Wright said on BBC MOTD.

“When you look at someone like Nakamba, very impressive Nakamba today…Trezeguet his best game for Villa for me today, and then you’ve got Mings and Engels at the back.

“I think Villa are gonna be fine, they were really good.”

It won't count for much consolation, but it was a valiant performance from Aston Villa.#MOTD pic.twitter.com/r1e9HOEFOE

Nakamba put in a tireless performance against the Reds, winning more tackles (five) and gaining possession more often (nine times) than any of his team-mates.

The holding midfielder has hit the ground running at Villa Park since arriving from Club Brugge during the summer, and he is proving to be one of the best in his position in the English top-flight.