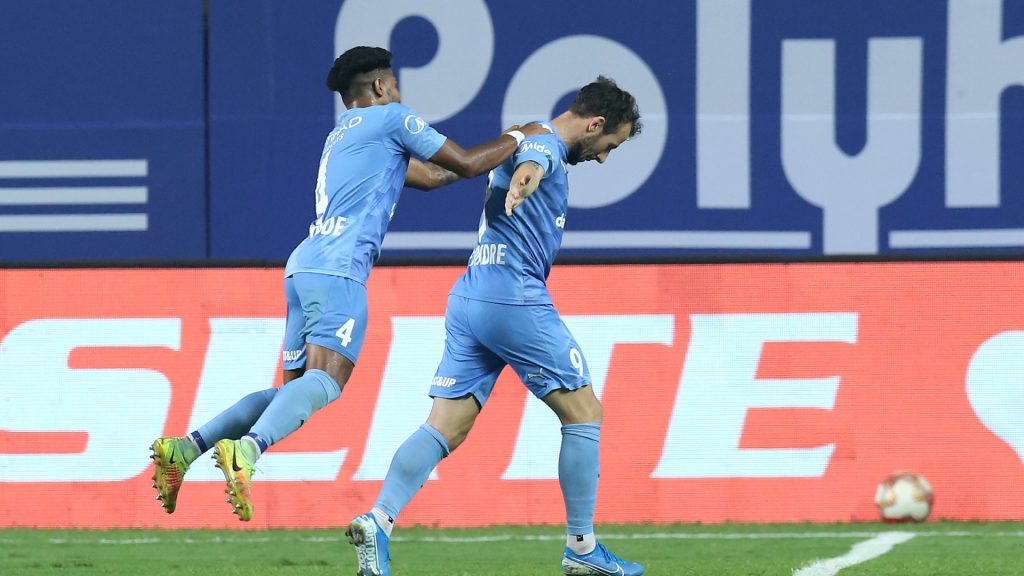 Sunday’s Indian Super League action kicked off with a cracker, as 6th-placed Hyderabad FC (who were unbeaten) faced league-leaders Mumbai City FC. Hyderabad had turned up the heat against East Bengal last time out, but Mumbai’s winning-streak went cold against the 10 men of Jamshedpur FC. A brilliant clash was brewing, and here’s what we made of it:

The match started off a bit slowly in terms of chances, but there was a proper firework in the 38th minute when Bipin Singh cushioned Ahmed Jahouh’s crossfield ball to Vignesh Dakshinamurthy in the box, and the left-back directed his volley right into the top corner.

38' A stunning passing move from Mumbai ends with a sublime volleyed finish by Vignesh!

Hyderabad had a huge chance to equalise in the 44th minute when Akash Mishra delivered a pinpoint ball for Mohammad Yasir, and Amrinder Singh was caught out when he tried to palm it away but missed. With the goal at his mercy from the edge of the box, he somehow sent it wide. Adam le Fondre doubled Mumbai’s advantage in the 59th minute when Rowllin Borges intercepted a pass on the left flank and rolled it across the box to Adam le Fondre, who controlled the ball brilliantly before guiding it into the bottom corner. https://twitter.com/justpainwithjay/status/1340640939933458433 Adam le Fondre had a very good chance to double his tally in the 78th minute when Cy Goddard slipped him through on the right. He tried to chip the keeper, but only hit the side-netting. Vikram Pratap Singh had a pop in stoppage time after he burst up the left flank, cut inside and tried to pick out the top corner, but just missed wide. That didn’t matter in the end though, as Mumbai City came away with a convincing 2-0 victory.

Hyderabad hadn’t been beaten this season as they held their own against the likes of ATK Mohun Bagan and Bengaluru FC, but this was their biggest challenge. They didn’t have too much of possession as expected, but they did go toe-to-toe against the league-leaders in the first half, defending resolutely and posing a regular threat at the other end. However, they still ended up conceding to a fantastic strike, and later failed to take their chance to equalise before half-time. The home side failed to create anything substantial in the second half though, and they went on to concede a rather sloppy goal which stemmed from some poor passing around their defence. This really took the fizz out of their charge for an equaliser, and even the inbound Liston Colaco couldn’t trouble the scoreline. https://twitter.com/Shashankmittu7_/status/1340651254855290882 With that, Hyderabad FC’s mightily impressive unbeaten start came to an end, but their performance wasn’t discouraging in any way.

No Boumous, No Problem

Without Hugo Boumous against Jamshedpur FC, Mumbai City really lacked creativity as they struggled to wear their resolute stand down, and they didn’t take the few good chances they got either. The Frenchman initially returned to the lineup, but he picked up a knock in the pre-match warm-up and had to sit this one out as well. Cy Goddard was drafted in to replace him at the last minute, but he had to work in an unfamiliar central role. Therefore, Mumbai couldn’t create any major openings in the first half of this match either, but the one shot on target they managed was an absolute cracker, and it gave them the lead. Things didn’t change greatly in the second half either, but the Islanders kept most of the ball and defended well whenever they lost it. They added a second goal which allowed them to have a bit more comfort in the match, and the fact that didn’t allow their opponents to have a single shot on target meant that they could cruise to victory.

Mumbai have proven that they can do it without Boumous too, so this side are surely going to go a long way this season.

How good is this man? Adam le Fondre was on fire tonight, not exactly in terms of goalscoring, but in terms of overall work-rate and pressing. He was absolutely everywhere and made many long sprints just to press throughout the match – even in the latter stages of the second half. He capped it all off with a brilliant finish following a slick touch to control the ball, taking his season tally to five goals. The English forward scored with his only shot on target, taking 28 touches and winning 3 ground duels as well. Another match, another goal for Adam le Fondre.

Hyderabad FC stay in 6th spot, while Mumbai City go three points clear at the top once again, in part thanks to Vignesh Dakshinamurthy’s first goal of the ISL. Hyderabad FC’s longest-ever unbeaten run comes to an end with this defeat, while Mumbai have their best-ever start to an ISL campaign. Hyderabad face Kerala Blasters next on Sunday, while Mumbai City’s next match is against the Blasters too, but it’s a day after the new year as they will not partake in matchday 8. Stats courtesy Sofascore.com
Join our Telegram channel to stay up to date on the latest in marketing