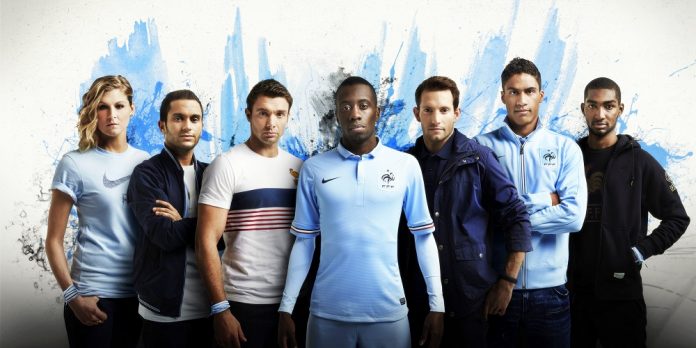 Nike has unveiled the eye-catching pale blue France 2013 away kit with tricolore detail. The shorts and the socks are also pale blue.

The new kit holds a distinctive new look, which is a testimony to the ambitions of the new French football teams – fusing French tradition with style and pride.

The shirt has a button collar and an iconic French cockerel crest. Both sleeves have tricolore motif while another tricolore detail can be found on the right sleeve. The shorts also have the tricolore detail on each side, while the top of the socks also sport the French flag’s red, white and blue.

Printed in the inside of the shirt is the motto “our differences bring us together”. It has been found on the French national team kits since 2011.

The French female football team will be the first wear the new kit on the pitch on March 9th in their match against Brazil. The men’s team will debut the new France 2013 away kit on March 22nd, 2013 against Georgia in their 2014 World Cup qualifier in the Stade de France.

The complete France 2013 away kit is in line with Nike’s commitment to combining performance with lower environmental impact. Fabric for the new kit’s shorts is made with 100% recylced polyester while the shirt fabric is made with a minimum of 96% recycled polyester. Both percentages are a norm in the modern Nike football gear.