Unless we’re watching an International friendly, the days of a football team donning the traditional 1 to 11 numbering system is long behind us.

Since the Premier League switched to assigned squad numbering at the start of the 1993/94 season, you are just as likely to see a goalkeeper wearing the number 25 shirt as you are of hearing Alan Hansen refer to defending as ‘catastrophic’ on Match of the Day.

The diverse use of club numbering systems means such conventional selections, as the number 10 shirt being synonymous with the team’s playmaker, do not need to coincide any longer.

Today, shirt numbers have become much more than to simply identify a football player on the pitch, they have become their own brand and football clubs now seem to use the system to build revenue in a thriving worldwide market.

David Beckham’s £24.5 million pound transfer to Real Madrid in the summer of 2003 sparked a media frenzy. News of the then England captain needing to wear a shirt number other than his famous number 7 had about as much press interest as the actual deal itself.

Beckham favoured the number 23 shirt. “Why 23 David?” came the inevitable question at his transfer unveiling. The rumour mill spun, with numerous thoughts on why the former Manchester United man had opted for this particular shirt.

A Newcastle fan told me his theory behind the Beckham 23 brand – “It’s because Beckham’s idol is Shola Ameobi”. American basketball legend Michael Jordan, who famously wore the 23 jersey for his Chicago Bulls, was the reason Beckham gave of the decision. 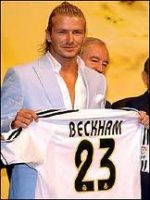 Shirt numbering has such an overwhelming effect on players and fans following the game that I cannot help but reference everything I do back to football.

When frequenting the local Weatherspoon’s for a pint and a bite to eat I’ll always call back to the girlfriend enquiring what table number I need to quote. If the response is “eight” I’ll nod to acknowledge and mutter to myself “Frank Lampard”.

It just goes to show how far this pretty meaningless part of football can stretch and this area of the game now seems to carry its own language. An England shirt with a number 8 on explains itself, it doesn’t need the name Lampard above it for you to know who the shirt belongs to and represents.

The individuality and power certain numbers can carry just highlight how much revenue they stand to make. Player branding through shirt numbering targets the market in subtle way whilst being consistently thrown in our faces come match day at the same time. The resultant winner though is always the same, the football club.

Shirt numbering has become a bit of an obsession to me. I find using it as a useful method for counting things as well as remembering them, a bit like football algebra if you like. If I’m on my way to the Chinese with an order of two number 6’s, a 26, 32, and an 80 along with two number 10’s, I’ll regurgitate that as two Bobby Moore’s, a John Terry, one Carlos Tevez and a Ronaldinho, oh and two Diego Maradona’s………..that’s if I don’t have a pen handy of course.

This unhealthy obsession spreads to my gaming too. I take the squad number assignment very seriously on Football Manager each season, leaving ‘glamorous’ numbers such as 23 and 32 to any big signings I might make.

Players themselves seem to take the number they’re to adopt very seriously too. Whether it is superstition or other, shirt numbering is a very important factor to their game.

Michael Ballack demanded he took the number 13 shirt from William Gallas on his arrival at Stamford Bridge, claiming it his ‘lucky number’. Shaun Wright Phillips was informed by text message prior to his move to Chelsea that the number 7 shirt was ready and waiting for him. He responded to Jose Mourinho with “give me the 24 shirt instead” due to it being his son’s birth date.

Birth dates are a popular source to the choice of shirt numbers, made prominent with Ronaldinho’s number 80 shirt at AC Milan. The Brazilian, who was born in 1980, is one of many players in the modern game with the relatively new phenomenon of high shirt numbering.

Whether it be superstition, marketing or the desire to have a brand, importance of player squad numbering continues to grow along with the impact it has on the football World around it as numbers become more and more associated with famous football players.

Luckily I’ve not yet been seated at table 47 in the pub.