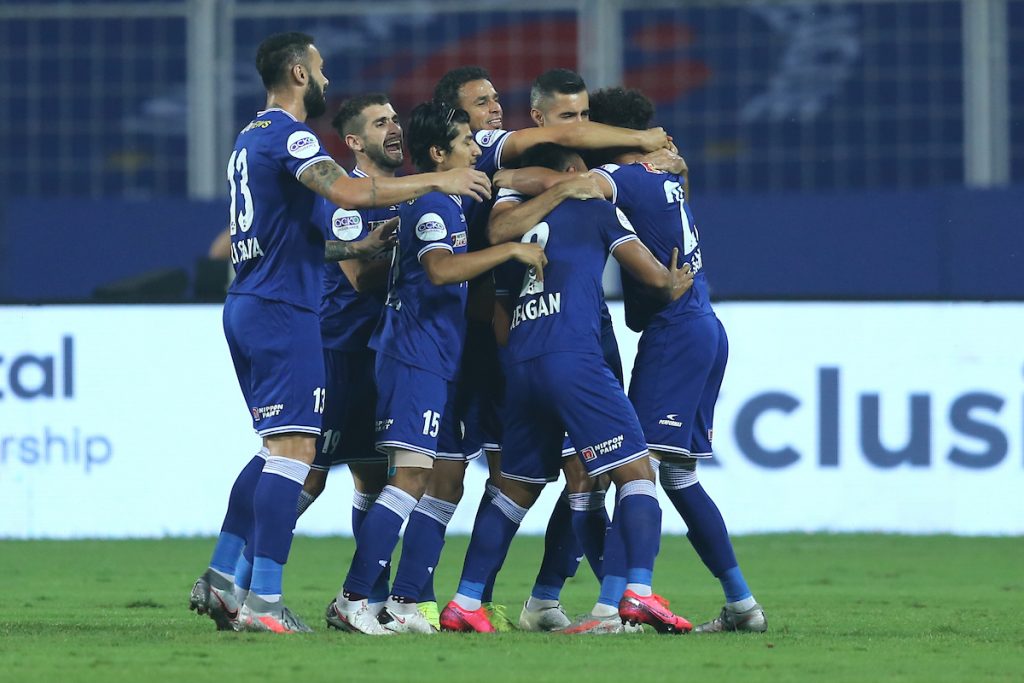 The Indian Super League’s matchday 7 action continued into the weekend, and Saturday’s clash was a big one as 7th-placed FC Goa took on Chennaiyin FC, who were just one spot behind them having played one fewer game. The Gaurs had won two of their last three matches, while Chennaiyin were winless in four. An exciting clash was set to grace the Fatorda, and here’s what we made of it:

Goa started off well, but it was Chennaiyin FC who had a huge chance early on when Anirudh Thapa burst up the right and squared the ball to Jakub Sylvestr, who only had the keeper to beat from six yards out, but he failed to do so. However, from the resultant corners, Rafael Crivellaro picked out the top corner at the far post as the ball sailed over the keeper and the crowd in the box.

Goa responded in the ninth minute though, as a slick passing move saw Alexander Romario square the ball to Jorge Ortiz in the box, and the Spanish forward smashed it into the top corner.

Three minutes later, Rafael Crivellaro tried his corner trick again, but this time Mohammad Nawaz tipped it over. The next corner had to be taken from the opposite side, and it fell to Anirudh Thapa at the edge of the box. The Indian midfielder had his powerful half-volley pushed out by the keeper, and he attempted a follow-up from a similar position with his left foot, but this time it went wide. Chennaiyin had another very good chance in the 23rd minute when Reagan Singh drilled a low cross from the right, but Jakub Sylvestr’s near-post effort didn’t hit the target. Three minutes later, Rafael Crivellaro lobed a cross right across the face of goal, then Fatkhullo Fatkhuloev squared it to the centre for Lallianzuala Chhangte, who missed an open goal because his effort was too high.

What a miss!!!!
Is Chhangte going to be the Udanta of this season#FCGCFC #ISL

Chhangte had another massive chance in the 43rd minute as Jerry Lalrinzuala’s saved shot fell to him in a central area, but he skied it again with the goal at his mercy. Three minutes into the second half, Lallianzuala Chhangte unselfishly squared the ball to Rafael Crivellaro, but it looked like he passed the balloon curse as well as the Chennaiyin captain sent his shot deep into the stands.

Lmao, I can't believe it. Boss pass from Chhangte, only for Criva to do a Chhangte. What is happening. Get in the god damn game @FCGoaOfficial #FCGCFC

Goa had a rare sight of goal in the 50th minute when Brandon Fernandes tried to curl one into the corner from distance, but Vishal Kaith was equal to his effort. Soon thereafter, Seriton Fernandes whipped a cross in from the right and Jorge Ortiz attacked it, but he missed the target with his header. Finally, in the 53rd minute, Chennaiyin retook the lead as Rafael Crivellaro tricked his way around James Donachie and drilled a low ball across the box for Rahim Ali, who rolled the ball home for a change.

Ali then played Lallianzuala Chhangte through on the left in the 78th minute, but the Indian international just flashed his finish past the far post. Up at the other end, Lenny Rodrigues let fly from the edge of the box, but he just missed the top corner by a couple of metres. Goa failed to create a major chance thereafter though, so the match ended 2-1 in Chennaiyin FC’s favour.

After that disappointing defeat against ATK Mohun Bagan, FC Goa knew that they would have to put in a strong performance to bounce back immediately. Their first-half performance wasn’t ideal for that, though, as they conceded early on from a direct corner and didn’t really threaten at the other end. That was until a slick passing move saw Jorge Ortiz get an equaliser, and all of a sudden it was game on again. However, that happened to be Goa’s only shot on target of the half, and they were insanely lucky to go into half-time with equal scores. The Gaurs didn’t start the second half too well either but were continuously spared by Chennaiyin. They got a couple of decent half-chances to punish their opponents’ wastefulness, but they couldn’t do any better and eventually ended up conceding once again.

What chaotic football! And not the kind Goa usually like to play. No control at all. Sucks. Playing without defenders for the last 10 mins! Chennai beating Goa has always been on the top of my "results that hurt" list. 😪😪 Bahh #FCGCFC

They desperately probed Chennaiyin’s defence late on, but they couldn’t salvage anything again.

With just one point from their last three games, Chennaiyin FC knew that they would need to start getting some wins under their belt soon. The return of Anirudh Thapa looked to have stabilised their midfield, and that allowed Rafael Crivellaro (who was also restored to the starting lineup) to push further forward. They started off very brightly and took the lead early on too, but let an equaliser in soon thereafter. For the rest of the first half, it was all one-way traffic, but the away side just couldn’t take their chances no matter how easy they were, leaving Csaba László wondering if there was some sort of a curse on his players. Lallianzuala Chhangte, in particular, missed many great chances, but in the second half, even Rafael Crivellaro got in on the act. Eventually, however, the Marina Machans’ attacking intent was rewarded when young Rahim Ali walked the ball in. Their multiple massive misses meant that Chennaiyin did have to hold on in the latter stages, but they did manage to pull through.

Csaba Laszlo game management is so good 👏 Keeps on making alterations based on the need. JG doesn't do that at all and Coyle wasn't too experimental within game. #FCGCFC

On another day, you wouldn’t be too surprised if Chennaiyin’s wastefulness went punished, but you have to admit that this was a deserved victory considering how good they were when in full flow.

Rafael Crivellaro didn’t start Chennaiyin’s last match, and they clearly missed him as they blanked. He returned tonight, and he did so in style. The Brazilian maestro started the match by attempting to score directly from a corner, and he succeeded on his second attempt as he picked out the far corner. The Chennaiyin captain strung his side’s attacks together for the rest of the match and had a great chance to score in the second half when he skied over a half-empty net. However, he made up for it by brilliantly assisting Rahim Ali’s goal after some samba-style work against James Donachie in the box.

The ex-Vitória de Guimarães man finished the match with 3/4 corners on target including a goal (you read that right), 6 crosses, 48 touches and an assist. A magical display.

FC Goa and Chennaiyin FC both hold position in 7th and 8th, but they are now level on points and the visiting side have a game in hand. Rafael Crivellaro’s strike was the third-ever Olympic goal (direct goal from a corner) in ISL history, while he also assisted Chennaiyn’s first second-half goal of the season as Rahim Ali opened his ISL account.. FC Goa face Jamshedpur FC next on Wednesday, while Chennaiyin take on East Bengal on Boxing Day. Stats courtesy Sofascore.com