It is only a matter of a few months until Euro 2016 comes around, and with the qualification stages to determine the entrants into the finals now over, the draw for the finals is much anticipated. The draw will take place on the 12th of December in Paris, and the pots for the same have been determined based on the seedings.

In the draw, six groups of four teams each will be determined with one team from each pot in each group. France, as the hosts, will not take part in the drawing process as they have been automatically allocated the first position in group A. There are plenty interesting permutations and combinations that can be made until the day of the draw, as we take a look at all the 24 teams who will headline the biggest event of 2016. 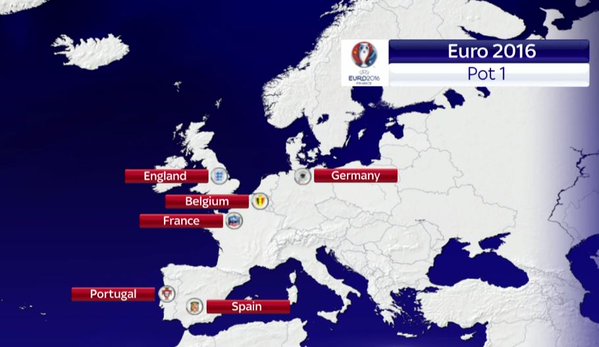 The hosts have had no competitive football since bowing out at the hands of Germany in last year’s World Cup, but have played friendlies against a few top teams to test their wits. France look an interesting prospect given the talents of Paul Pogba, Antoine Griezmann and Anthony Martial at their disposal, and the fact they tend to always play well as hosts will be one of their advantages as they bid to win their third continental crown.

The reigning European champions will bid to become the first team to win four European Championships when they set foot on French soil next summer. Spain qualified for what will be their 10th appearance in the finals by winning their qualification group with little fuss. They conceded only three goals throughout, two of which were let in in a loss to Slovakia last year, their first qualifying loss since 2006.

The world champions will be hoping to emulate Spain and France in winning the European Championship after a World Cup triumph. Germany are the most successful team in the history of the European Championship, winning three times and ending up in second place thrice. Germany navigated through their group with relative ease, although there were hiccups on the way as well.

Roy Hodgson’s Three Lions will enter the Euros next year with a perfect qualification record, becoming only the sixth team in history to achieve that feat. England’s qualification campaign was flawless, although there is little hope of a challenge for honours given the youthfulness and inexperience of the players in the squad. Euro 2016 will be the first major international tournament for many of the England players.

Portugal haven’t set the footballing world alight in international tournaments since reaching the final of Euro 2004 at home, and next summer’s tournament could be the last time we see Cristiano Ronaldo in a European Championship. Portugal negotiated the qualification stage with ease, winning seven of their eight games, although their goal return of 11 is considerably low for one of the highest ranked teams in Europe.

The current leaders of the FIFA rankings, Belgium will enter next month’s draw as the number one ranked team in the world. Marc Wilmots’ Red Devils will only make their fifth appearance at the finals, but the presence of players like Eden Hazard and Kevin De Bruyne makes them one of the contenders. Their qualification run was straightforward, only Wales proving to be sticky ground as they qualified as the group winners. 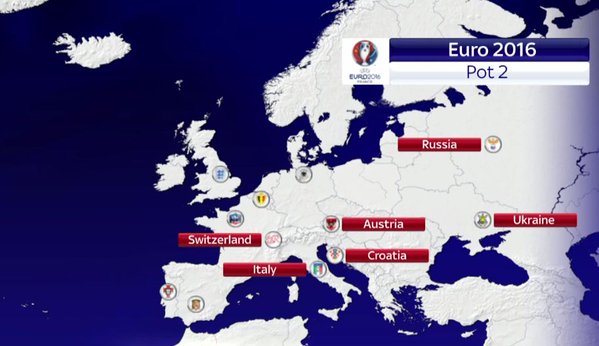 There is a different look to the Italy side this time out,
from the side that finished second at Euro 2012. Antonio
Conte’s side went through the qualification campaign undefeated, but the 1968 champions have found goals hard to come by. Graziano Pelle top scored for Gli Azzurri in the qualifiers with only three goals, and with Mario Balotelli nowhere to be seen in the periphery of the national team, Conte’s men look weak going forward.

Russia changed managers midway through their qualification campaign after their disappointing start to the campaign saw the departure of Fabio Capello. CSKA Moscow manager Leonid Slutsky made an instant impact after replacing Capello, as Russia finished second in their group. Zenit St Petersburg striker Artyom Dzyuba was Russia’s most prolific striker during qualification, and he will hold the key again next summer.

Vladimir Petkovic’s side have the look of a typical pot 2 team. Switzerland failed to inspire during their qualification campaign, and much of their hopes next year rests on the shoulders of qualification top scorer Xherdan Shaqiri, but aside from the Stoke City man, there isn’t much to look for from the Swiss. Euro 2016 will be their fourth appearance at a European Championship finals.

The Austrians made it through the qualification stage of the European Championship for the first time in their history, and they did it with some style. Marcel Koller’s side won nine of their ten qualifying round matches, and were one of the only four teams to qualify with an unbeaten record. They topped their group in the process, and they will hope to make more noises than their group stage exit at home in Euro 2008.

The two-time quarter finalists will make their fifth appearance at a European Championship next summer and Ante Cacic’s side are one of the dark horses of the tournament as along with Italy, Croatia have the shortest odds among the teams in pot 2 to win the tournament. Croatia finished second in their qualification group behind Italy, and like most teams, they also have a goalscoring crisis with midfielder Ivan Perisic being their top scorer in qualifying.

Ukraine became the latest team to qualify for the finals after seeing off the challenge of Slovenia in the two-legged playoffs with an aggregate 3–1 win. Like Austria, Ukraine also made it through the qualification stage for the first time, having qualified as hosts in 2012. Mykhaylo Fomenko’s team will rely mostly on their explosive attackers, Andriy Yarmolenko and Yevhen Konoplyanka, to better their performance from Euro 2012. 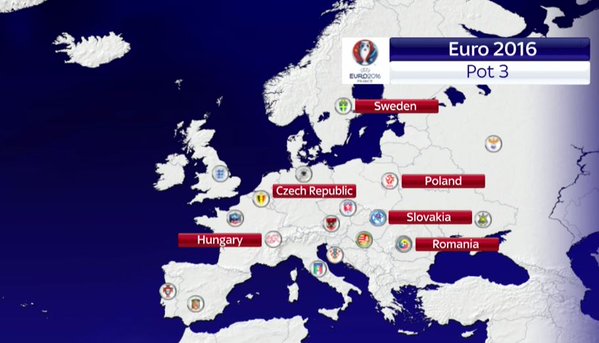 The only group winners in the qualification stage in pot 3, Czech Republic are one of the more successful teams in the history of the European Championship. The Czechs have made it to the semi-finals five times, and the final twice. Pavel Vrba’s side finished atop their qualification group, which comprised of the likes of Netherlands and Turkey, and Euro 2016 will be their sixth
appearance in the finals.

Sweden qualified for the finals after seeing off Nordic rivals Denmark in the playoffs. Zlatan Ibrahimovic will likely play his last international tournament next summer, and he will be keen to repeat the heroics of 1992, when the Swedes made it into the semis. Erik Hamren’s team, though, have little else to offer aside from the undoubted quality of Ibrahimovic.

The Poles will make only their third appearance at the finals, and they possess two of the most prolific strikers of the qualification campaign. Robert Lewandowski is often regarded as Poland’s one-man army, but his strike partner Arkadiusz Milik has also chipped in with six goals of his own. No team scored more than Adam Nawatka’s team in qualification, and Poland’s attack will be one of the things to watch next summer.

Romania qualified for their fifth European Championship finals with the help of a defence that conceded just twice in the entire qualification campaign. Anghel Iordanescu’s team negotiated a pretty straightforward group but had little to show in the attacking third. No player scored more than two goals, and what the Romanians lack in attacking quality is compensated by a resolute defensive unit.

The highest seeded debutantes Slovakia qualified against the odds in a group comprising of Spain and Ukraine, and even handed Spain their first defeat in qualifying in Zilina last year. Slovakia don’t score in truckloads, and neither are they as leaky as the Czechs. Jan Kozak’s side boast of a wellrounded team led by Napoli’s Marek Hamsik, and will fancy their chances of causing an upset or two at the finals.

Hungary will make their return to the European Championships after a long 44 year gap, and they took the long route to make it through to the finals. A 3–1 playoffs win over Norway did the job, and they are one of the biggest underdogs at next summer’s finals. Coach Bernd Storck might have reached the ceiling with his team, and there are chances Hungary could be one of the whipping boys. 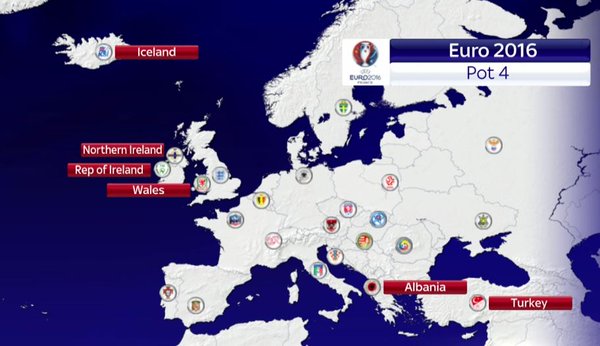 Turkey make a return to the finals after finishing the qualification campaign as the best third-placed team. Fatih Terim’s side finished comfortably ahead of the Netherlands in group A, and will be hoping to emulate their semi-final appearance in Euro 2008 and perhaps take a step further. They are in pot 4, however, and could be drawn in an unforgiving group.

Martin O’Neill’s side pulled off two professional performances in the playoffs to qualify for the finals at the expense of Bosnia-Herzegovina. The Boys in Green negotiated a tough qualifying group comprising of Germany, Poland and Scotland, and even finished the qualification stages by conceding the least amount of goals in their group. Only their third appearance, O’Neill will be keen to improve on Euro 2012’s group stage exit.

One of the stories of the qualification campaign, Lars Lagerback’s Iceland surprised all and sundry by finishing in one of the two automatic qualification spots ahead of Turkey and the Netherlands. Aided by a rock-solid defence, Iceland will look to Gylfi Sigurdsson for inspiration in what will be their debut European Championship finals appearance.

Wales ended their long wait for a major international tournament appearance as they easily secured their passage into next summer’s finals by finishing second in their group behind Belgium. Led by the superlative attacking tools of Gareth Bale and a defence that conceded only four goals in the entire campaign, Wales carry the shortest odds among all the pot 4 teams and opponents will hate to have Chris Coleman’s side in the same group.

Another debutante is Gianni De Biasi’s Albania who upset the apple cart by finishing ahead of Serbia and former champions Denmark in the qualification stages. The most miserly team in the qualification campaign to qualify for the finals, Albania lack quality throughout the pitch and their lack of experience at the top level could be their undoing and like Hungary, could end up being the whipping boys of the tournament.

One of the four home nations to qualify, Northern Ireland eased through their qualification group in top spot, winning six of their ten games. Michael O’Neill’s side will be making their European Championship bow as the lowest seeded team of the lot, and they will look forward to qualification round top scorer Kyle Lafferty’s goals to have any chance of making a mark on the big stage.