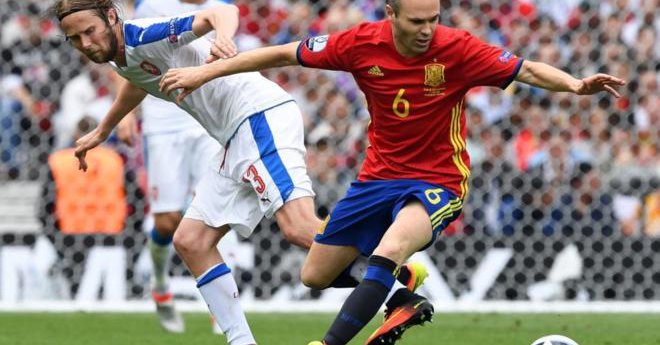 Italy booked their place into the last 16 of Euro 2016 on Friday after sealing a 1-0 victory over Sweden, thanks to a late strike from Brazil-born striker Eder.

In Group D, Spain produced an emphatic performance to beat Turkey 3-0, while Czech Republic came from behind to salvage a 2-2 draw against Croatia.

Italy progress to the round of 16

Despite a patchy performance, Italy did just enough to secure their passage into the last 16 of Euro 2016. The Brazil-born striker Eder was playing in his first major finals for Italy struck a well-taken 88th-minute goal to leave the Italy bench celebrating wildly.

After a lacklustre performance in Sweden’s 1-1 draw with the Republic of Ireland, Erik Hamren’s side now need a victory against Belgium, if they are to have any hope of making it to the knockout phase.

As usual, all the pre-match hype was centred on Swede striker Zlatan Ibrahimovic, but Italy’s water-tight defence kept him ineffective and frustrated.

Just when it looked like Italy’s hopes were drying out, it was Eder who rescued Conte’s men with a brilliant mazy run evading past Swede defence with ease before slotting home with great composure with two minutes left to play.

It was all going smoothly for Croatia. They were controlling the midfield, went 2-0 up and gave the impression of scoring every time they put men forward.

Then, the role reversal took place. First, Modric got injured (reports suggest he won’t play against Spain), then Croatia fans threw flares on the pitch for which the national team may have to face a huge consequence, and finally, they succumbed under pressure and conceded two goals in no time.

UEFA said it would launch an inquiry after at least eight flares were thrown from the Croatian section of supporters in the Saint Etienne stadium. One steward appeared to be hit by one of the flares.

Ivan Rakitic and skipper Darijo Srna pleaded the fans to stay calm. But ugly scenes took place in the stands -punches were thrown between the fans as stewards cleared the section.

Despite failing to impress against Czech Republic in Spain’s first match of Euro 2016, Vicente del Bosque kept his faith with Alvaro Morata, and the Juventus striker didn’t disappoint.

Morata, whose future has been speculated heavily in the media, and has been linked with a €60m move to Arsenal and Manchester United, looked lively throughout the game and scored the opening goal with a header, with Nolito being the provided. He completed his second of the night with a gentle tap in, after a nice interchange of passes between all the Spanish players except Pique.

1 – Gerard Piqué was the only outfield #ESP player to not touch the ball in the build-up to the third goal. Omitted.

Once again, Andres Iniesta produced a masterclass performance, but this time Spain forwards – Morata and Nolito – made sure they put their finishing boots on, as La Roja convincingly defeated Turkey 3-0 on Friday night. Check the goals and highlights below: