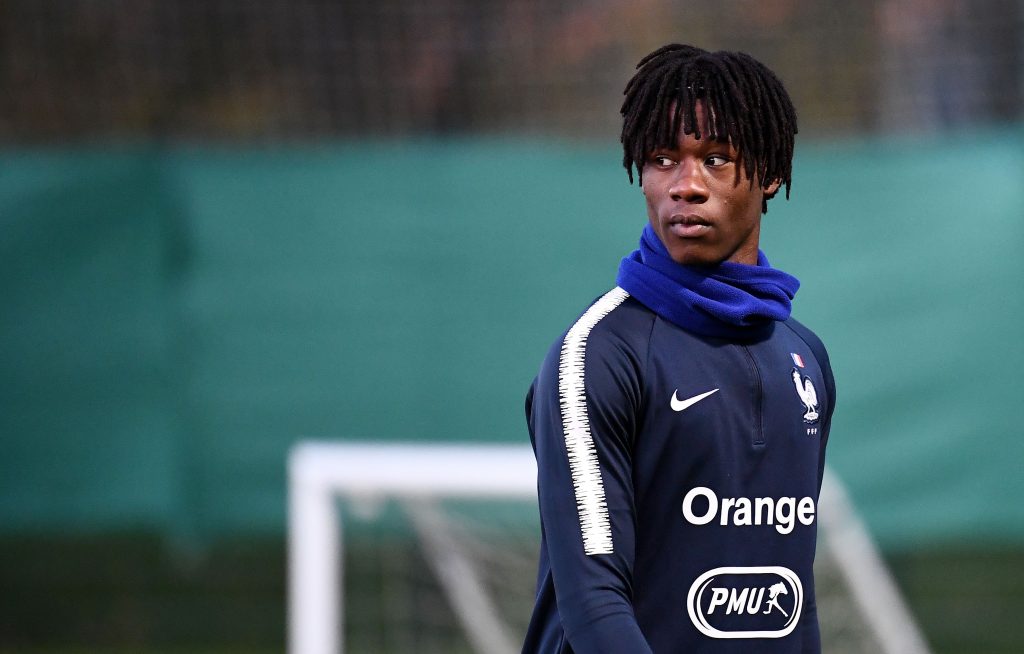 Eduardo Camavinga is perhaps the most exciting teenager in world football, with top clubs across Europe making plans to sign him either this transfer window or next year.

Camavinga is still focused on becoming a better player, and his call up to the French National team was a special moment:

a childhood dream, even though I’m still a child!

He became the youngest player to be included in Les Blues’ senior squad since René Gérard in 1932.

17 – Eduardo Camavinga (17 years and 9 months) could become the first minor to play for France since WWII and the first player born in the 2000s to appear with Les Bleus. Precocity. pic.twitter.com/3p7ROnCCNG

The call-up, along with his stellar performances for Stade Rennais in the French Ligue 1, have thrust him into the spotlight, and he is regarded as one of the hottest young prospects in world football.

So, let’s take a look at who he is and his journey to teenage stardom…

Eduardo Camavinga was born in Miconge, Cabinda, a highly disputed exclave of Angola, a country located on the west coast of Southern Africa on November 10, 2002.

A year later, his family, including his parents and five siblings, left the former Portuguese colony and moved to France in hope of a safer life.

They first reached Lille but soon moved to Fougères, which is some 40 kilometres away from Rennes. Initially, they faced quite a few difficulties.

They were helped by the social services in Lille and Amiens, and they reached Brittany before finally establishing themselves in Fougères.

Young Eduardo didn’t care much about football. His mother, Sofia, got him to practise judo, and he enjoyed it too.

However, he did play football in the house according to his father and broke everything around, which prompted his parents to send him to play club football.

At the age of seven, Camavinga joined Drapeau-Fougères, a local club. One of his first coaches and now a family friend, Nicolas Martinais recalled that it didn’t take long to see that he had something special, and he was quickly playing with children much older than him.

Eduardo’s hard-working character and resolve were put to the ultimate test in 2013. His family had just moved into a new house, but it was burnt down when Eduardo’s father was at work and his mother was driving her children to school.

It was a big blow for the family, and they were all in tears. At this point, Celesta Camavinga, Eduardo’s father told him, “You are the hope of the family, it is you who will raise it up.”

He lived up to his father’s words later that year, as he was scouted and invited to join Stade Rennais’ youth academy. Philippe Barraud, the man in charge of Rennes’ youth recruitment, said: “There was no time for procrastination. We saw that he was a good, local player, so he had to play for us.”

Laundry Chauvin, his coach at the Rennes Youth Academy remembers Eduardo fondly, “Eduardo is an example, in every sense of the word.

He saw everything in advance, he understood everything the first time around, and he was always in a perspective of learning and daily progress. Working with a kid like that is just a joy.”

Eduardo quickly climbed up the ranks of Rennes’ youth system and found himself playing for the reserve team at just 15 years of age. He made only 13 appearances for Rennes II and scored four goals in that short time period.

At the age of 16 years and one month, Eduardo Camavinga signed his first professional contract with Rennes in December of 2018, becoming the youngest-ever player for the club.

A few months later, in April 2019, Camavinga was handed his senior debut by Julien Stéphan against Angers in a 3-3 draw and became the youngest player to don a Rennes shirt in a professional football match.

His manager recognised his limitless potential, saying: “Eduardo can have an incredible career, and we will do everything to ensure that he reaches his potential.”

He quickly started showing signs of his abilities, and on the 18th of August, 2019, he had his breakthrough moment.

Facing the mighty Paris Saint-Germain at home, Camavinga provided the assist for his team’s second and winning goal as they overcame the French champions in a 2-1 victory.

The then-16-year-old midfielder was named man of the match, as he took 60 touches of the ball, completed 41 passes at an accuracy of 97.6%, won six free-kicks and, of course, got an assist.

Then, in November, arguably the biggest event in his career so far occurred outside a football stadium – Eduardo and the Camavinga’s were granted French citizenship, making him eligible for selection for the French youth squads and senior team.

One day after his seventeenth birthday, he was called up to the French under-21 side for games against Georgia and Switzerland, during which he made one appearance.

The 17-year-old continued to impress at the club level and scored his first senior goal in December against Lyon in the 89th minute, which proved to be the only goal of the game.

After the Coronavirus-enforced break, the French top-flight was back underway in August, and Camavinga started the new season with a bang.

First, he came off the bench and got an assist as his side drew 1-1 with Lille. Then, at home against Montpellier, he scored a wonderful solo goal en route to his side’s 2-1 victory.

The French squad for the UEFA Nations League was announced soon thereafter, but Camavinga wasn’t part of the initial plan. He ended up replacing Paul Pogba, who tested positive for COVID-19 and had to be omitted from the squad.

His playing style can be compared to that of Paul Pogba – he himself cited the Manchester United midfielder as an inspiration, “I am inspired by Paul Pogba. He is a very good player with great qualities.

“He proved himself in the French national team, you have to look at what he did; world champion. But I don’t like comparisons much.”

Comparisons are inevitable, however, and the stats back it up too. Throughout his career, the 17-year-old has averaged 41.8 passes, including 2.4 long balls per 90 with an accuracy of 87.6%.

His defensive work rate is quite high too. The teenager has made 4.6 tackles and 1.4 interceptions while making only 1.6 fouls per 90 in his senior career which has seen him spend 2,740 minutes on the football pitch.

What can he improve on? Hear it from the man himself – “I still have a lot of things to learn, I am young and I think I need to improve my right foot and remain focused throughout an entire match.”

Well, first of all, a potential French debut as Les Blues face Sweden and Croatia in the Nations League.

At the club stage, however, his future is very much up in the air. Camavinga has emphatically stated that he will see out the 2020/21 season with Rennes.

His contract expires in 2022, and he is reportedly unhappy that Rennes have taken so long to offer him a renewal on his current deal.

Some are suggesting that Real Madrid are the favourites to get his signature in 2021, but Bayern Munich and, of course, Paris Saint-Germain are also said to be interested.

It is said that Rennes will be holding out for €100 million, so it remains to be seen whether anyone can splash that cash.

One thing is certain – Eduardo Camavinga is insanely skilled. Watch this space because he may well be the next big thing.

For more French football, check out our Ligue 1 News site.