While we wait for the least-important-cup-final-for-Premier-League-clubs, let’s look at today’s news (or lack thereof).

1. What is Rafa’s Email Address?

We are told that Tom Hicks sends Rafa Benitez an email now and then. While MSM hacks (mainstream media journos) focus on the trite and arbitrarily constructed conflict between owners and manager, I have a much more important question – what is Rafa’s email address? Just as important, what is Hicks’ email address? Wenger? Fergie? Bush?

These guys use email, right? So how does one get in touch? Anyone?

Giggs is taking up a coaching course this summer and Fergie thinks that Giggs, Scholes and Neville will join Ole in a coaching role at United (Scholes has once said that he’s not interested, although Neville is the type of player who’d want to be involved, I’m sure).

Good to see players interested in reinvesting their time and experience into the sport. I’d be remiss if I didn’t mention Adrian Clarke here.

Dutch coach Marco van Basten will step down after Euro 2008 and will take up the Ajax manager post from next season. Johan Cryuff will have some role in helping the club before the start of the new season as well.

I wrote a longish article this morning, about fans, football, money and eventually (since we’re all banging on about it), Game 39. Have a read, and while you’re at it, read Ian’s thoughts as well.

“You have the pistols?” he asked TurboTax. We were terse. There was no need for gentlemen to say more.

When the weapons had been inspected and agreed upon, we took our places, and for the first time I got a good look at my adversary. Before me on the grass there stood what appeared to be a normal-sized desktop computer, with a black outer case. Its haughty appearance was enhanced by the cape which it wore around its shoulders, and by the small bicorne hat which had somehow been fitted over its top. A miniature rapier hung from a belt which was fastened into one of its USB ports. I regarded it with an inquisitive eye.

“How on Earth are you able to ride a horse?” I asked.

“I have an iPhone,” it said proudly.

Recently all we’ve been talking about here on Soccerlens seems to be money and football. With that in mind, I invite you UK-based Soccerlens readers to spend your money to buy some very nice personalised football books and football calendars here and here as football gifts (for yourself of course, who wants to spend money on others?).

The usual disclaimer applies – I own the calendar, the book is being delivered and I was not offered (nor did I ask for) any money to make this plug. No affiliate links either, if you noticed. Oh, the irony of having to justify promoting what you like.

7. Some perspective on Gazza

“George Best ended up dying because of his problems. I hope Gazza doesn’t go down that road.

“I’m always thinking about Paul and you just hope he finds that bit of happiness some people don’t seem to find.

“We will do everything we can as a club to help Paul Gascoigne, his dad and his sisters to get through this.

“He was my boot boy so we go back a long way.

“It seems negative when you say he’s been sectioned but I really believe it is a positive thing and something which needed to be done.”

And excerpts from Gazza’s autobiography.

The question is – does immense talent compensate for failings in a person’s life?

I fucked up – Red Rants should have been nominated for the Best New Blog award but I vetoed that nomination at the time, thinking that it would show too much bias. That is bullshit now that i think about it, since Red Rants has developed over the last 8 months or so to become not only the premier Manchester United blog online (due respect to Scott) but it is also one of the top United communities online.

Certainly better than some of the other nominations.

I’m going to be closing the Game 39 Poll soon, so get over and vote if you haven’t already. 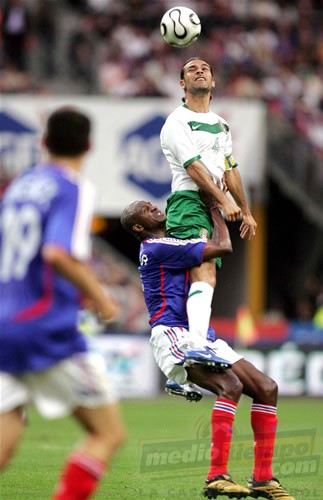 I, too, wonder what Patrick Vieira was thinking…