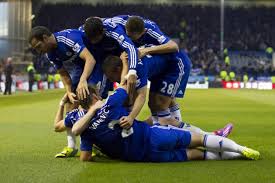 One half of the season is over, and I can imagine Jose Mourinho will be very pleased with the performance of Chelsea so far. Deservedly top of the table, and still looking very strong. However, conceding 5 to Tottenham on New Year’s Day and being on identical points and goal difference with Manchester City will still cause some anxiety in Stamford Bridge.

Squad – A very strong squad which has the quality to play attractive, control football. Eden Hazard is arguably the best player in the league at times, with his magical feet, agility, and lightning pace. No-one can take the ball off the little Belgian, and he is a constant menace whether he is dribbling close to the line out wide, or cutting in to unleash a lethal drive home. Leading the line is Diego Costa; the Spaniard is a tank of a man, bullying defenders and never giving them a second’s rest. But he’s also very good technically for a player of his stature, and can finish from anywhere, as 15 goals in 23 appearances will tell you. There’s the wizard of the team, Cesc Fabregas, the Spaniard with terrific vision and passing, and the creative spark behind everything Chelsea do. When he doesn’t play, Chelsea look less dynamic in attack, and the play isn’t as sharp or as fluid, he’s a crucial member of the squad. Finally, there’s the key to the team, Nemanja Matic. A Serbian who’s instantly won over the Stamford Bridge crowd, and Jose Mourinho. He’s been a brilliant anchorman all season, breaking up play, and quickly distributing. He tackles and intercepts play all the time, and since he always looks to pass forward, he ignites rapid counter attacks, and often, goals came from Matic taking the ball back, and getting play going. In short, the squad is overflowing with quality.

Jose Mourinho– He’s one of the best managers in the world for a reason. Few teams look as tactically sound and sharp as a Mourinho team, and Chelsea this season have been no different. The team plays creatively and often dominates matches, with very fluid, quick passing and clever movement. Also, he’s building a very effective counter-attacking force like he did with Madrid, who have the best counter attack in the world at the moment, and has the pace and creativity in the team to achieve that. Mourinho is a superb analytic and spots the opposition weaknesses very well, and this gives them a real edge in the big matches.

Nemanja Matic – No, I’m not saying that Matic is the weakness of the team, in the sense that teams will get past him easily, because they won’t, he’s very good. The weakness is how important he is to the team. It’s happened to Jose Mourinho before, in the Last 16 of the Champions League, 2012/13 season, as manager of Real Madrid against Manchester United.  Sir Alex Ferguson noticed Xabi Alonso was the key to the team, he was much too important. Therefore, he got Welbeck man marking him, always tight on Alonso, never giving him space to dictate play. He shut down Xabi Alonso, and he shut down Mourinho’s Madrid. If it wasn’t for two goals in 3 minutes from Modric and Ronaldo, United could’ve been in the quarter final. Matic is the key of this Chelsea – he breaks up play and protects the back four very well, so they’re rarely vulnerable. Mauricio Pochettino (Tottenham Hotspur) saw this ahead of the Tottenham vs Chelsea clash at White Hart Lane, and took action. Christian Eriksen is a crucial player for Tottenham, he has bags of talent and can create chances out of nowhere. Pochettino knew Matic would be specifically marking Eriksen in an attempt to shut down Tottenham’s impressive playmaker. On the day, he told Eriksen to run Matic all over the park, take him away from the space in front of the back four, and open space for Tottenham to drive into towards the back four. Fabregas doesn’t have the defensive priority Matic does, and taking away Matic leaves the back four very exposed, and Eriksen did, all night, dragged the Serbian away from his role, allowing an excellent Harry Kane and company to smash 5 past the Blues.

Predicted Finish: 1st – There’s something special about Chelsea this season, and although I think it will be tight between the Blues and Manchester City, Chelsea will come out on top as Premier League champions.