Chelsea’s pre-season tour is drawing to a close. The Blues have been solid without being great, and there are still several questions that remain unanswered with regards to what their best XI is. With less than a fortnight left for the Premier League season to begin and Chelsea pegged as pre-season favourites by many bookmakers including www.online-betting.me.uk, Jose Mourinho has some big decisions to make.

The biggest conundrum that Mourinho faces is how Chelsea will set up in midfield. Endowed with a plethora of options, the Portuguese faces the problem of plenty as he looks to find the right combination in a squad overflowing with talent.

Here’s a look at the 3 most likely ways Chelsea will set up in the upcoming season:

The 4-2-3-1 system is the most popular in the footballing world today. Like most other sides, it is also the system Chelsea have deployed over the last 3 or 4 seasons. The four-man defence is covered by a two-man pivot, with three attacking midfielders and a lone striker. Ramires, Jon Obi Mikel, Frank Lampard and Nemanja Matic have occupied the pivot in the recent past for the Blues. New signing Cesc Fabregas though, who is already seen as an assured starter for Chelsea, may not be too happy playing that deep. Matic and Marco Van Ginkel have impressed as a combination in pre-season, but whether they play together when the season starts remains to be seen. 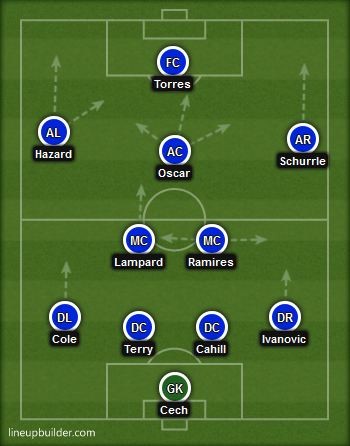 Mourinho has a vast number of options in the front 4, with Eden Hazard, Oscar, Willian, Andre Schurrle, Diego Costa, Fernando Torres and Didier Drogba all fighting for places. The biggest question is who will operate as the Number 10 i.e. the attacking midfielder just behind the striker. Oscar started in that position last season and flourished, but faded away in the latter part of the season. Fabregas, if needed, can be played there, but one would feel that he needs t0o be slightly deeper to perform to his maximum.

The formation at the core of Mourinho’s success at Stamford Bridge in his first stint at the club, the 4-3-3 was only used by Chelsea in the big games last season. It yielded positive results, with the Blues being unbeaten against their fellow top 4 sides, but their approach was seen by many as a bit too defensive. With Fabregas’ addition though, this squad may be tailor-made for the 4-3-3. Matic will provide defensive cover, while Fabregas will add creativity and dynamism. Ramires, with his boundless energy and stamina, could be deployed as the third midfielder. With genuine wingers being in no shortage, Mourinho will be tempted to replicate the side that brought him so much success in the 2004-05 and 2005-06 seasons. Damien Duff, Arjen Robben and Joe Cole were the wingers in that team, and Hazard, Schurrle and Willian are more than capable of stepping up to the mark in this one. 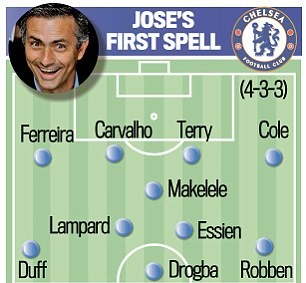 Another formation used extensively by Mourinho back in the heyday at Stamford Bridge, the midfield diamond can yield great results if made to function properly. The classic 4-4-2 may be out-of-fashion today, but the diamond i.e. one defensive midfielders, two central midfielders and one attacking midfielder, is used by many managers. Carlo Ancelotti both achieved silverware and played attractive football by using this formation at Chelsea, something owner Roman Abramovic always craved for.

One distinguishing feature of this system is that is gives both full-backs the license to go forward and be an integral part of the attacks. Jose Bosingwa, Ashley Cole and Branislav Ivanovic, who were the full-backs in the Ancelotti era, made full use of their freedom. Chelsea’s full-backs this season though, are likely to be Cesar Azpilicueta and Filipe Luis, both of whom are not to keen to go foray beyond a particular point in the opposition half. 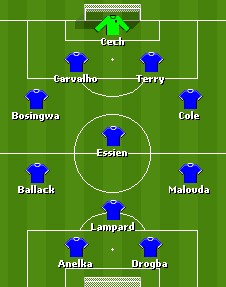 Fabregas’ talents could be perfectly exploited by playing him as a central midfielder alongside the versatile Matic, while Mikel’s stability and solidarity will be perfect in the defensive role. The tip of the diamond can be occupied by any of Oscar, Willian or Hazard, and the strength and pace of Costa coupled with the movement of Torres may prove to be a fruitful combination. Costa can also be supported by either of Hazard or Schurrle up front, who have both played in forward roles on quite a few occasions in the past for both club and country.