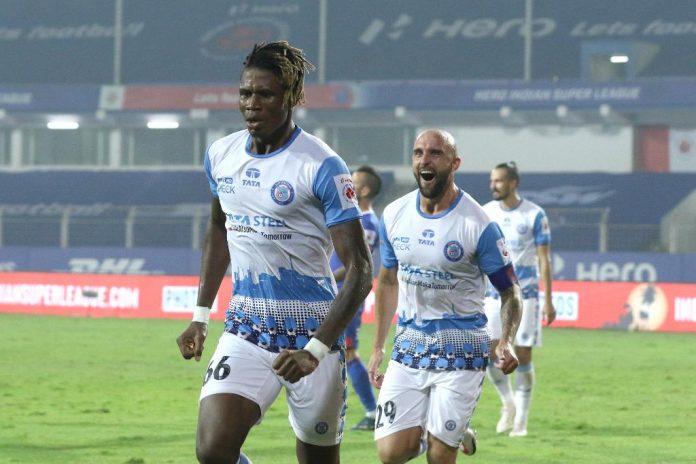 The first clash of the Indian Super League’s matchday 9 saw Bengaluru FC, who were occupying the final spot in the table, take on 6th-placed Jamshedpur FC. Both sides lost their previous clashes, losing six-game long unbeaten runs in the process, so they were keen to come back strong. Carles Cuadrat had a point to prove in particular, as he had to show tactical adaptability to combat the loss of Ashique Kuruniyan. A very interesting clash was set to ensue, and here’s what we made of it:

Just three minutes into the match, Kristian Opseth took a free-kick from a promising position. His effort cleared the wall and was on target, but Rehenesh was equal to it. Bengaluru FC came close to scoring again in the 10th minute when Suresh Singh Wangjam found Sunil Chhetri making a run down the middle, but the Indian captain’s deflected effort went out for a corner. He was at the end of Dimas Delgado’s delivery too, but he sent his free header over the crossbar. Jamshedpur FC’s first notable chance came in the 17th minute when Aniket Jadhav squared the ball to Nerijus Valskis in the box, but the Lithuanian striker skied his first-time effort. The Blues had a huge chance to score in the 33rd minute when Suresh Wangjam ran through on the right with just the keeper to beat. He decided to play it across to Cleiton Silva, but his pass was just a little short and the Brazilian forward’s effort was well-smothered by Rehenesh. Two minutes later, Wangjam brilliantly cut the ball across the box for Sunil Chhetri, whose shot just went wide.

Rehnesh has improved leaps and bounds from last year. Surely one of the best keepers in the league. Fantastic!#BFCJFC

Jamshedpur’s next big chance came in the 44th minute as Jackichand Singh flung himself towards Laldinliana Renthlei’s cross at the far post, but Gurpreet Singh Sandhu got a hand to it and bounced over the crossbar. The second half started off rather slowly, and it was the Men of Steel who had the first big chance in the 62nd minute when a free-kick caused all sorts of conundrum in the Bengaluru FC box. Nerijus Valskis’ close-range effort was saved by Gurpreet Singh Sandhu and Stephen Eze’s follow-up went high. Jamshedpur FC took a deserved lead in the 79th minute, when Aniket Jadhav whipped a cross in from the right in the second phase of a set-piece. Stephen Eze attacked it with a diving header, and the ball crossed the line before Pratik Chaudhari acrobatically cleared it. https://twitter.com/sagar17291/status/1343589233122938881 Four minutes later, Mobashir Rahman let fly from distance, but his shot just went wide of the bottom corner. In the 85th minute at the other end, Rahul Bheke powered a header towards goal, but his shot was parried away by Rehenesh. Soon thereafter, Deshorn Brown went through on goal, but Peter Hartley did enough to put him off and his effort went straight into the arms of Rehenesh. Bengaluru couldn’t really pose a goal-thereat thereafter, so Jamshedpur FC came away with a 1-0 win.

After that disappoint loss against ATK Mohun Bagan, Bengaluru FC had a number of questions to answer. The main one revolved around the abscence of Ashique Kuruniyan, which seriously disrupted the Blues’ play on the left flank. Rahul Bheke, a right-footed centre-back, was deployed there once again, and yet again, he didn’t exactly impress. The 30-year-old Indian international didn’t get forward at all, and his defending wasn’t the best either as Jamshedpur focused their attacks on their right and the opener came from his area too. In attack, Carles Cuadrat’s men did create a number of good chances but they couldn’t take any of them, in part due to their tendency to overplay things in extremely promising situations. They continued to squander chances after conceding a rather disappointing goal, and never really looked like they would even earn a point.

This was a very poor performance and loss for Bengaluru FC, who haven’t answered any questions but made them much bigger on the contrary.

After failing to win any of their first three games, Jamshedpur FC have really turned things around. That unlucky loss last time out against FC Goa proved to be just a blip, as Owen Coyle’s side were back to their best tonight. They were disciplined in the first half as Bengaluru FC looked to be the better side, and although their defences were breached a couple of times, Rehenesh TP held his own and preserved his clean sheet. The Men of Steel bounced back in the second period, as they started to create better chances and kept things tight at the back. For once, instead of conceding in the last 15 minutes, they took the lead through a half-fortunate but thoroughly deserved goal (and one where the officials didn’t make any mistakes about the goal-line). They held on to it too, and with no stoppage-time drama, three huge points were theirs.

Fantastic win for @JamshedpurFC
With every game becoming a fan of @DefendLikeEze
Scores goals, defends with all his heart.
Hartley-Eze really are the Men of Steel. Alex Lima also looks like a top player.
But, serious worries for BFC, what's going wrong?#BFCJFC #LetsFootball

Owen Coyle looks to be repeating Chennaiyin FC’s tricks from last season with Jamshedpur FC, who have another big victory in the bag before a short break for them. While this may not be an ointment to relieve the pain of that defeat against Goa, it certainly sets them up very well for the new year.

The Jamshedpur FC keeper might have come under some criticism after seeing red against Odisha FC (and much more in the last season), but he has been utterly brilliant ever since.

Well done TP Rehenesh. From being trolled, criticised, mocked last year, what a fantastic comeback.
Best part is that he has been consistent, the one thing that was missing in his game.#BFCJFC #FootballUnited

Tonight, he was simply outstanding, as he thwarted Bengaluru FC multiple times to keep his side level. He started the match by smartly saving a free-kick, before making a huge stop in a two-on-one scenario against Suresh Wangjam and Cleiton Silva. He made a few key stops in the second half too, and came away with a well-deserved clean sheet. The Indian shot-stopper made 5 saves in the match, and 4 of those were off shots from inside the box. To add to that, he won a couple of aerial duels to claim crosses, doing brilliantly to keep his side well in contention. A match-winning display in front of goal.

Bengaluru FC drop one place down to 4th, while Jamshedpur FC go flying up to the final podium spot. Stephen Eze’s third goal of the season (and second in two matches) delivered the points for his side, while Harmanjot Khabra was left disappointed in his 100th appearance for Bengaluru FC. Bengaluru FC’s next clash comes after an eight-day break, as they will face Mumbai City, while Jamshedpur FC take on Kerala Blasters on 10th January. Stats courtesy Sofascore.com
Join our Telegram channel to stay up to date on the latest in marketing