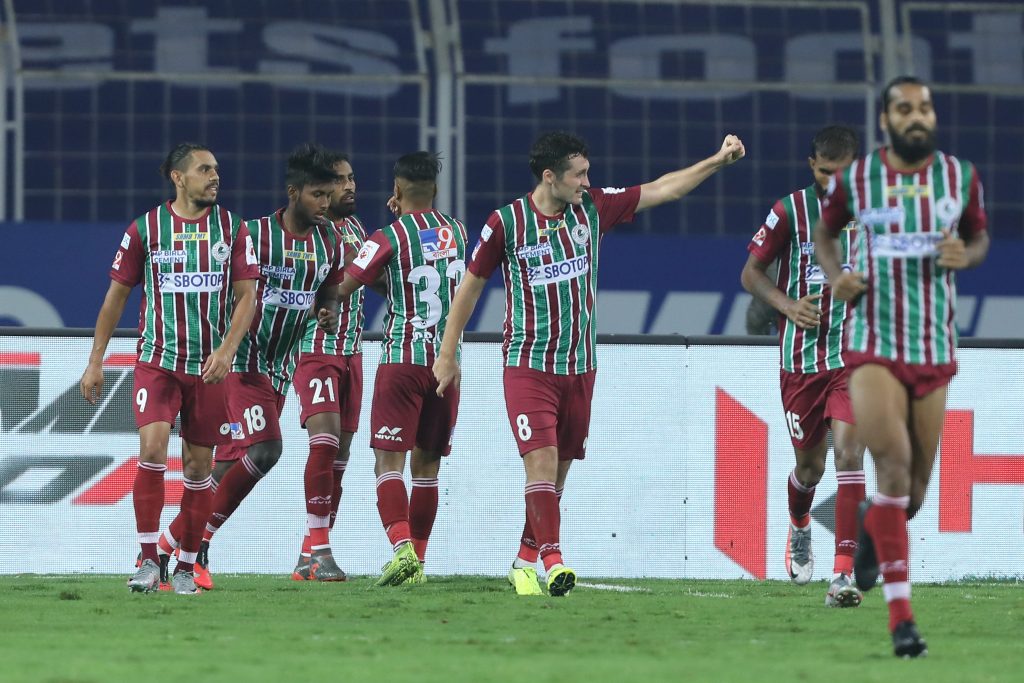 After an exciting clash between SC East Bengal and Odisha FC, the Indian Super League’s action continued on Sunday with a matchday 10 opener involving 2nd-placed ATK Mohun Bagan and 6th-placed NorthEast United. The Mariners were on a four-match unbeaten streak, while the away side had failed to win any of their last four. An intriguing battle was brewing, and here’s what we made of it:

The first chance of the match came in the 18th minute after a cagey start as Carl McHugh got a free header from Edu García’s free-kick, but he missed high. ATK Mohun Bagan got into a few good crossing positions in the first half and delivered some good balls too, but they never really tested Gurmeet Singh with their headers, so it was comfortably goalless at the break. The Mariners finally took the lead in the 51st minute after a number of corners when Tiri guided the ball on to the far post region, where Roy Krishna was waiting to squeeze the ball home.

Six minutes later, ATKMB doubled their lead as Benjamin Lambot was seemingly tugged by Sandesh Jhingan and he inadvertently poked a corner past his own keeper, and it took a deflection off VP Suhair on the goal-line before going in. https://twitter.com/sagar17291/status/1345751223471722496 ATKMB nearly completed their corner hat-trick in the 67th minute when Tiri had a free header from Edu García’s ball into the box, but he just missed wide. Four minutes later, Federico Gallego sent a free-kick towards goal from a promising position, but it clipped the top of the crossbar and went out for a goal-kick. The home team were able to control the match thereafter, and they came away with a routine 2-0 win.

ATK Mohun Bagan were the second-best side in their 0-0 draw against Chennaiyin FC, and with Mumbai City continuing to look unstoppable, they knew that nothing short of three points would do tonight. Their first-half performance clearly didn’t seem to please Antonio López Habas, who looked unusually animated and flustered on the touchline. His side saw more of the ball, a stat that would please most managers, but probably not Habas, who prefers to deal damage on the counter. While ATKMB did get into some decent position, they absolutely lacked end-product and failed to threaten the NorthEast goal. As always, they shifted up the gears during the half-time break and came out looking a much more intent side. After a number of set-pieces in the first few minutes, Roy Krishna (again) helped the Mariners take the lead, and a bit of luck thereafter made it 2-0 in their favour following a Benjamin Lambot own goal. After that, it was a test of game management for the home side, and as they have done many times this season, they passed it with flying colours. https://twitter.com/Anupam__Bhaumik/status/1345762068310286337 This match, with its relatively low tempo, was probably the perfect way for ATK Mohun Bagan to prepare for their next clash against Mumbai City, which will be their toughest test yet.

After that very encouraging start to the season, NorthEast United have seemingly lost their way with no wins in five now. Their top-four charge looks to be falling apart ever so slowly now, as their initially-solid defence has now failed to keep a clean sheet for over three weeks. Further, their attack has blanked thrice in the last four matches, and with Kwesi Appiah out injured for a while, a lot will need to be changed for that stat to improve. The Highlanders never looked like they were going to trouble the ATK Mohun Bagan goal at any point, as they were doing the chasing for most of the match with just 43% of the ball. At the back, Dylan Fox looked absolutely solid, but Benjamin Lambot had a bit of an off-day and that’s what cost them. Even after conceding twice, there was never enough attacking intent from Gerard Nus’ men, who almost settled for a 0-2 defeat.

Atleast we lost to a quality opponent. C'mon lad. Now it's time to go back to the training ground and looked back into what doesn't work right and improve to really stay at the top of the game. 💪#StrongerAsOne

NorthEast United have suffered another poor loss, and if they are to challenge for a playoff spot, it’s about time that they start turning things around.

ATK Mohun Bagan move back up to the top of the table thanks to Roy Krisna’s sixth goal of the season and the fourth own-goal of the campaign, while NorthEast United stay in 6th. For only the second time this season, the Mariners have won a game after keeping more of the ball.

ATK Mohun Bagan take on Mumbai City on 11th January in a crucial clash at the top of the table next, while NorthEast United face Hyderabad FC on the 8th.