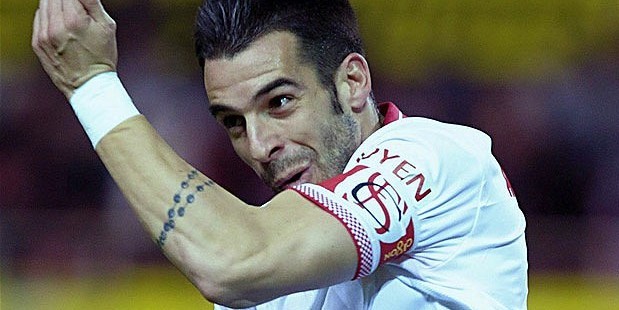 According to reports from Sky Sports, City are thought to be lining up a move for the 27-year-old, while reports in Spain suggest that a deal could be struck for a fee, in the region of £24 million.

Negredo, who expressed his desire to leave the club in the summer, has been a potential target of several top clubs, including Tottenham Hotspur and Atletico Madrid.

Newly appointed City boss, Manuel Pellegrini has wasted no time in stamping his own authority at the Eastland club, after signing Shakhtar Donetsk’s Fernandinho and Sevilla’s Jesus Navas already, and looks set to take his spending spree further upwards to £62m with the acquisition of Negredo.

The signing of Negredo, who has scored 70 league goals in his 139 La Liga appearances till date and found the net 31 times last season for the Andalusian club, could have a major impact for the club and the Premier League as well.

Once heavily linked with a move for Napoli’s Edinson Cavani and Borussia Dortmund’s Robert Lewandowski, City are now unlikely to move for any other striker with Sergio Aguero, Edin Dzeko and Negredo in the side.

Speculations have been rife about Dzeko’s eventual departure, which would perhaps explain Pellegrini’s intentions to sign another poacher in Alvaro Negredo.

City might have paid over the odds for his signature, but in return they have captured a proven goal-scorer who could become a crucial presence upfront, especially with the creative force he’ll have at his disposal at Manchester City.