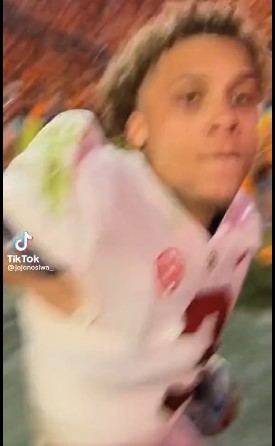 Saturday night was absolute chaos in Tennessee as fans rushed the field after their team beat Alabama. Amid the chaos, Alabama wide receiver Jermaine Burton appears to have hit a woman in the head as she passes him on the field a video on Twitter seems to show. Alabama is now investigating the incident.

Emotions were no doubt running high for fans and players of both Alabama and Tennessee on Saturday night. The last second field goal sealed the win for the Volunteers and their fans rushed the field overjoyed. At the same time, Alabama players were exiting the field, likely dismayed or even angry.

In the melee, Alabama wide receiver Jermaine Burton appears to have hit a female fan in the head as he left the field. There are a couple of videos on Twitter that appear to show the incident.

Alabama head coach Nick Saban said the team are aware of the videos.

“We are aware of the situation with Jermiane Burton as he was exiting the field Saturday,” Saban said. “We are currently working to gather more information.”

The first angle could possibly be taken by the female in question. We get a glimpse of Burton (number three) walking toward the camera as he seems to swing his arm. While it doesn’t quite look like a punch, it does appear as though it is a swat at the camera.

In another video we get a zoomed out view and we can see again that Burton lifts his arm in a swatting motion. Once again, we would not go so far as to call it a punch, but there is certainly a motion with his arm as he leaves the field.

Jermaine Burton smacking a girl in the head after the game pic.twitter.com/6DeqPYJ5WK

The woman in question is clearly shocked as she stops and turns around for a second to see who has hit her. We are sure she is surprised to find it was a Crimson Tide player.

Twitter is always good for some fun reactions and we will leave you with some of the better ones reacting to this moment:

Me on ESPN if Jermaine Burton touched me pic.twitter.com/DZ1ifCeWDS

Jermaine Burton to fans after a loss: pic.twitter.com/csoi9tECVw