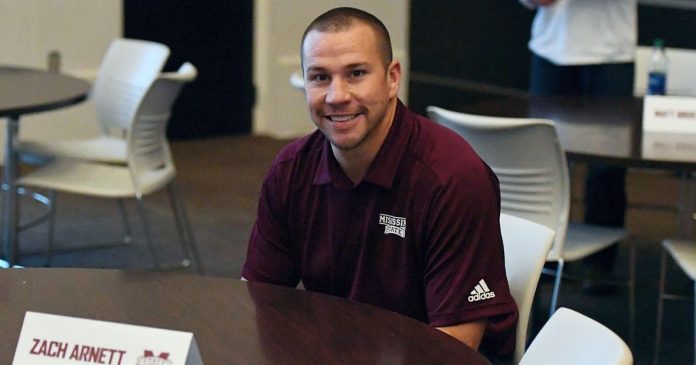 In the wake of the tragic demise of Mike Leach, Zach Arnett has been promoted from defensive coordinator to take over the Mississippi State head coaching role. Leach, who died on Sunday night following complications from a heart condition was the Bulldogs head coach from 2020. The Bulldogs acted quickly to sustain the balance of the program in the midst of the tragedy. Arnett’s deal is reported to be a four-year deal in the region of $3 million a year.

Arnett takes over as HC

It would not have been how Zach Arnett envisioned getting his first crack at a head coaching gig, but the former Bulldogs defensive coordinator will have a good reason to make his former boss proud over the next four years.

Arnett was appointed as head coach of Mississippi State after Mike Leach died on Sunday night. Leach, who was one of the most beloved coaches in college football, succumbed to complications from a heart condition. Leach’s passing left the Mississippi State head coach role open, but it did not take long for the Bulldogs to fill the position.

Mississippi State and defensive coordinator Zach Arnett have agreed to terms to make him the school’s next head football coach, per ESPN’s @PeteThamel. pic.twitter.com/mwmQbZDsLI

Arnett was appointed just a few days after Leach’s death in order to stabilize the program in the wake of the tragedy. The deal is believed to be worth $3 million a year.

Arnett played as a linebacker at New Mexico before moving into the coaching ranks. It did not take him long to move up to become defensive coordinator in New Mexico before Mike Leach took him to Mississippi State with him in 2020.

Arnett’s loyalty to Leach was proven in 2021 when a lot of big schools came knocking including Texas and LSU. Despite interviewing with the programs, Arnett stayed with Mississippi State.

His defense has been notoriously difficult to crack in the last couple of years, finishing top-five in total defense in the SEC.

“Our football program has dealt with a stunning blow at the untimely passing of Coach Mike Leach,” Bulldogs president Mark E. Keenum said. “It is imperative that we bring stability and continuity to our team and our coaching staff as we move forward from this tragic event. I have tremendous confidence in Zach Arnett’s leadership and believe he is uniquely positioned to continue the progress Coach Leach brought to our program. He brings great drive and intensity to the task.”

Arnett says he will look to continue the legacy of Coach Leach with this group of players.

“This is an extremely challenging time for both me and everyone associated with Mississippi State football,” Arnett said. “No one can ever replace Coach Leach and the impact he had on MSU and all of college football. This team is full of strong, resilient young men, and we are committed to continuing to build on the foundation Coach Leach laid and continue to honor his legacy.”

Arnett’s first game in charge will come against Illinois in the ReliaQuest Bowl on January 2.