As Rod Stewart once wheezed so fittingly, tonight’s the night.

After 30-odd days of solid(ish) football, the 2010 FIFA World Cup will culminate in Johannesburg this evening with a new name being etched on to that famous golden trophy – speaking of gold, you’ll never believe Wesley Sneijder‘s secret!

Germany left it late, but eventually secured their second third-place World Cup finish in succession by overcoming a resolutely determined Uruguay side – courtesy of an 81st minute Sami Khedira header.

After having to sit the semi-finals out due to suspension, it was Germany’s rising star Thomas Muller that opened the scoring in the 18th minute with his fifth goal of a highly-impressive debut tournament – instinctively pouncing to tuck home when Fernando Muslera spilled Bastian Schweinsteiger‘s low long-range drive.

Muller’s goal put a cap on a sustained period of early German dominance, and it seemed that Joachim Loew‘s side may be on course for yet another four-goal finish, but their richly-deserved lead only lasted ten minutes.

Schweinsteiger, who was captaining his country in the absence of Phillip Lahm, uncharacteristically yielded possession to Diego Perez and the Uruguayan holding man quickly slotted a pass through to Diego Forlan who, in turn, played in Edinson Cavani behind the German defensive line.

The Palermo forward duly took the ball into his path and calmly rolled a shot past veteran ‘keeper Hans-Jorg Butt and into the far corner of the net.

With the rain teeming down in Port Elizabeth and parity restored, Uruguay began to assert themselves in the game and should really have gone in at the break a goal to the good. Instead Luis Suarez dragged his shot tamely across the face of Butt’s goal despite being gifted ample time to apply a much more clinical finish.

However, in-keeping with the game’s topsy-turvy nature, La Celeste‘s advantage was only sustained for a further five minutes.

Jerome Boateng lofted a high ball to the far post and, with Muslera misjudging the flight of the ball once again, the cross hit Marcell Jansen on the side of the head and deflected fairly fortuitously into the gaping Urugayan goal.

With the scores level again the South Americans rapidly began to tire, but Die Mannschaft still had to wait until the game entered the last ten minutes to finally apply the telling hammer blow – Khedira nodding home from amidst a crowded penalty box.

Uruguay rallied themselves for one last stand, but when Forlan saw his devilish 92nd minute free-kick crash against the cross-bar, it was clear that it would be Germany who would be taking home the bronze medals.

“In the second half, when we were forced to dig deep, we saw the mental strength the team had to resist and then snatch victory. I’m pleased with that, the team deserves it. Altogether, what we’ve achieved, we never would have expected it eight or nine months ago.”

“It’s a tribute not just to the team but to all 23 players here that we were able to give a good performance and keep the quality high.”

“We’ve done well here, but next time we want to get to the next level.”

Khedira also promises that the best is yet to come.

“We showed our purpose and intentions, on a level playing field against a great opponent. We showed we can play any team in the world, there’s nothing above this. We lost, but we could have won.”

“Uruguay have been one of the surprises of the tournament and we still don’t realise what’s happened back home, I received an email on Friday from a lady I didn’t know who said, ‘Thank you, thank you, thank you for having changed the image of our country’.”

Tabarez gets to grips with the magnitude of La Celeste‘s exploits in South Africa.

“We wanted to reach the final, it wasn’t possible, but we did our best in every game. Now it’s time for a rest. Finishing among the top four teams is spectacular.”

Although disappointed at not reaching the final, five-goal hero Diego Forlan is still proud of his country’s achievements. 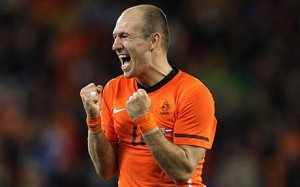 Winger Arjen Robben has outlined the Netherlands’ plan to overcome Spain in the World Cup final this evening, insisting that the Dutch will not allow the reigning European champions to impose their ‘ticki-tacka’ passing style upon them.

After playing so fluidly in the tournament beforehand, Germany came unstuck against Vicente Del Bosque‘s side in the semi-finals as they were reduced to spectators for long periods of the game – but Robben feels his teammates will not fall into the same trap;

“We will defend from the front. No-one here feels they are too special to get their hands dirty.

I was really surprised with how freely Germany let Spain play on Wednesday. We have to start pressing them earlier, and far higher up the field.”

However, the Bayern Munich star is not promising a return to the famous Dutch ideals of totaal voetbal, prioritising a win over any footballing niceties;

“I would much prefer to win a very ugly game than lose a beautiful one, we can still play attractive football but we can always rely on our good organisation as well.

If you are organised, you know one goal could be enough, which has been the case so far. The point is, we are in a World Cup final. From now on how you actually play no longer matters.

Of course, the intent is there to play good football but the result is far more important. We have heard enough of talk about how our football is very nice. But it gets you nowhere. We want to achieve something.”

Could it really be? Are the Dutch really going to adopt an anti-voetbal ethos?

“Every ball he shoots on goal, it flies either through one or two legs of an opponent or off someone’s head. I suspect he has a gold vuvuzela in his pants.” 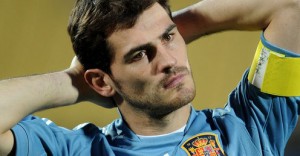 Spanish captain Iker Casillas has admitted that his side have been suffering from nerves throughout the World Cup, due to the weight of expectation put on them to consistently perform at the highest level;

“We’ve felt a bit anxious all the way through the tournament, even the early matches. This is a very important match – the most important of our careers – and we do feel nervous.”

Pull yourself together man. 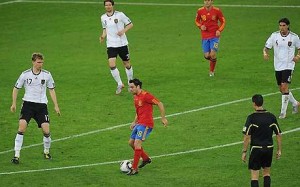 Spain midfield maestro Xavi has admitted that Spain will need to be more ruthless in front of goal if they are to finally get their hands on the World Cup trophy;

“It is clear we have not scored many goals. We are feeling very comfortable with the way we are playing, and we are creating plenty of opportunities.

Usually when you do that, you tend to get goals but we are not converting the chances to our normal percentage. Let’s see if we can lift that because it will be particularly important on Sunday.”

If you want chances converted then Fernando Torres is your man…oh wait.

Germany midfielder Mesut Ozil engages in a spot of pre-game keepy-uppies – with his chewing gum.

“There is no possible working without authority. It is better a bad boss than no boss. I have been deeply traumatised by what I have seen, what happened is a kind of destruction. We were ready to see them playing bad, but they went beyond this.”

Wesley Sneijder has shrugged off a calf problem and will be fit to start for the Netherlands in the World Cup final. (F365)

Jack Taylor, the last English referee to take charge of a World Cup final, has heaped praise on Howard Webb ahead of Sunday’s showpiece in Johannesburg. (BBC Sport)

Today’s (Sunday 11th July) round is as follows: