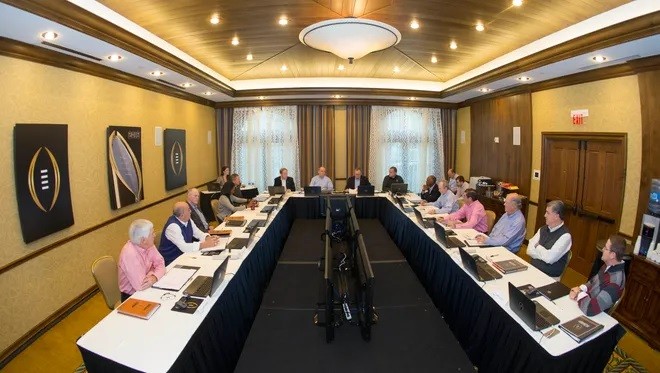 With the release of every College Football Playoff Top 25 rankings comes increased scrutiny. However, we do get a clearer picture of how the CFP will look. The week 12 rankings were released on Tuesday evening and there were no big surprises given last week’s standings. Given the current rankings, is it a foregone conclusion that two SEC teams make the CFP?

How the top ten looks

The College Football Playoff spots remained the same for week 12. Georgia, Ohio State, Michigan, and TCU all won in somewhat convincing manners last week and made the CFP selection committee’s life a little easier.  They remain the top four.

Tennessee smashed Missouri, and remain on the bubble in fifth. Last week’s sixth ranked team, Oregon got beat at home by Washington which allowed others to leapfrog them.

LSU, USC, Alabama, and Clemson all moved up one spot to the 6th through 9th spots after their week 11 wins. Meanwhile, Utah rounds out the top ten after they leapfrog Ole Miss, who lost to Alabama.

SEC in good position to get multiple CFP spots

Currently, four of the top eight spots are occupied by SEC teams. But is it a certainty that the SEC gets at least two College Football Playoff spots? The obvious answer is ‘no’, but they are in a particularly good position to do so.

1. Only the top four teams control their own destiny.

2. The CFP committee wants to make Tennessee play another road game against Georgia.

3. The CFP committee absolutely wants to put three SEC teams in the playoff for the first time.

Georgia is a shoo-in for a playoff spot at this point regardless of the result of the SEC Championship Game. So that is one spot locked up by an SEC team. One of Michigan and Ohio State is also getting in, so we can give another spot to the Big Ten. That leaves two open spots to play for.

TCU absolutely needs to win out to do so. Any loss for them is almost certainly terminal. The sportsbooks only make them 2.5-point favorites at Baylor this weekend meaning confidence in them winning out is low.

Tennessee, ranked at five, are in a really good spot. They have to win their remaining games, but a one-loss Vols team sitting at five should scare everyone.

“Tennessee is in great shape. If Tennessee wins out they are the 4 seed. If TCU loses Tennessee gets the 3”

If Georgia wins the SEC, that means the two other spots are still anybody’s to grab. USC would need to win the Pac-12 convincingly to get in, TCU needs to win to out get in, and if either of those fails to materialize, Tennessee could get in through the back door.

In the event LSU wins the SEC, Tennessee holds a massive victory over the Tigers. It will be interesting to see how the committee sees that. Obviously, it depends on how results around them play out, but as the tweet above says, that could pave the way for a three SEC team CFP. We think it is unlikely gets in over LSU in that scenario, but it certainly is not impossible that the committee thinks differently. Regardless, two SEC teams are getting in should that happen.

A scenario or two where there is just one SEC team

One of the only scenarios where we don’t have multiple SEC teams seems to be if TCU wins out, USC absolutely thumps everybody on the way to a Pac-12 championship, and Georgia slaughters LSU in the SEC Championship Game. A Tennessee loss in the next couple of weeks might do it too.

While it looks as if it is not a foregone conclusion that multiple SEC teams will be in the College Football Playoff, it sure looks like there is a high chance of it happening.