India
Home News we get what we deserve with football punditry 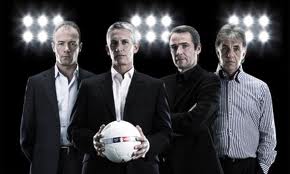 Football is the biggest sport in the world.

Its England’s national sport, beloved by millions and one of the few things, if not the only thing that really unites us a country and creates any sort of national spirit for a couple of weeks every two years (four or more years if we balls things up and don’t even qualify). There are TV and radio stations devoted under the guise of ‘sport’ to relentlessly stuff football down your throat till your gagging and choking.

So if football is so popular, then why as a nation do we put up with idiots giving us patronising dull stupid dumb drivel for every game we watch?

To quote a younger but always magnificent Danny Baker, sports departments on TV ‘are the last bastion of slack, feeble, smug, shoddy, empty, crass, lumbering clichéd lamebrain semi-masonic outrage’. Every week these moronic imbecilic self-satisfied buffoons put Shearer, Hansen, Lawrenson and others on the Match of the Day sofa.

These people don’t inform us of anything, do little but commentate over footage we’ve already seen, use every cliché in the Football Book of Cliches (which must be the size of Eric Pickles’s bill at McDonalds) and do sod all except irritate the hell out of the watching public.

I’ve played enough football to know all the basics of the game and read a damn sight more Jonathan Wilson books than any pundit ever has. To take this point further, I’ve never manufactured a table or a chair. But I know a good chair from a bad one, in the same way that though I’ve never played top level footballer I know a good team and a good player from bad ones.

Of course if ex-footballers were as eloquent and thought provoking as ex-cricketers then it wouldn’t be a problem, but footballers lack the intelligence and telegenic qualities of pundits in other sports, along with having grating voices more likely to give you tinnitus than an appreciation of say Victor Moses in the Wigan attack. They know nothing of tactics or methods of playing the game (or if they do they pretend not to), have no natural eloquence and also treat football with incredible faux seriousness.

The Sky Sports Soccer Saturday team know no more but are at least light hearted and jovial with it and don’t treat football like a documentary on the famine in Africa. You’ll get some cheap laughs if you’re not irritated by the ‘banter’.

On Match of the Day, transfer deadline day or a big European game on Sky you get this ludicrous seriousness about things. Freddie Sears’ possible loan move to Gillingham or a return of the fitness of the Arsenal goalkeeper in a dreary Champions League group stage game are the sort of things that get hype they don’t deserve.

Worse still is pundits terminology. ‘stonewall’, ‘deffo’, ‘pen, ‘OG’. Not to mention every decision is a definite. It’s a ‘definite foul’, ‘definite free kick’, ‘certain goal’. Well sometimes decisions are contentious. There are incidents in football that are not black and white, occasionally there are several shades of grey (and I’m not referring to Adrian Chiles’s suits).

There’s the foibles – Ray Wilikns saying ‘my word’, Jamie Redknapp saying ‘literally’, Graham Taylor claiming a commonly used word as his own; Gary Lineker’s bad jokes, which are all annoying.

There’s the stereotypes; that Italians are defensive, Germans dull and boring, Spaniards and Portuguese divers. ITV are the worst for this. For example I watched the Barcelona-AC Milan match and saw Jim Beglin condemn every foul as a dive by the player pushed, shoved and hacked by opponents. I somehow doubt he’ll say that when Frank Lampard or Steven Gerrard go down easily in the forthcoming FA Cup final wherever he is commentating.

Pundits are useless. They’re dumb. They can’t talk clearly or humorously. They’re not very good at their jobs with the odd exception (Gary Neville and Lee Dixon spring to mind-both right backs incidentally) and get paid handsomely for not being good at their jobs. Yet they’re a ubiquitous presence amongst football matches and programs.

And you know why?

Because we the public deserve them. With people’s dumb questions on 606 and Talksport, their hair trigger propensity to take offence at every perceived slight at their club, the refusal to embrace any sort of intellectual talk on the game, we get what we deserve, reap what we sow. Dumb stupid ineloquent lethargic coma inducing xenophobic foghorning walruses. Literally. My word.