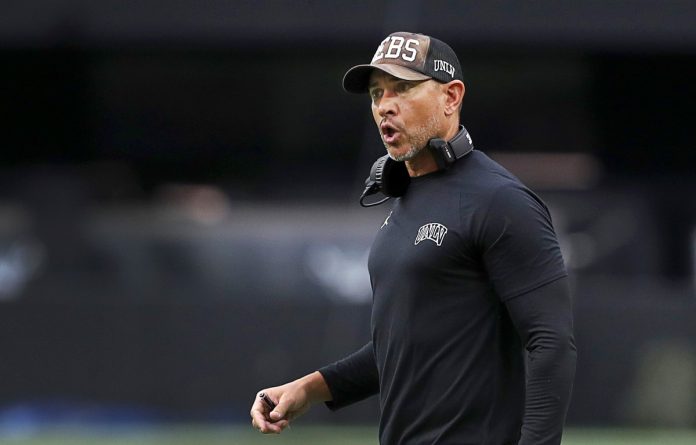 UNLV made one of the more surprising firings of the season when they fired head coach Marcus Arroyo on Monday. The Rebels were fresh off a 5-7 season when they let Arroyo go after three seasons with the program.

Marcus Arroyo was surprisingly fired by the UNLV Rebels on Monday after guiding the team to a 5-7 season. The Rebels had improved every year under Arroyo who was with the program for three years.

In his first year, UNLV failed to win a game and went 0-6. The next season the Rebels managed a 2-10 year, and then got better again going 5-7 this year.

While it seemed Arroyo had got the program heading in the right direction, the powers that be did not agree, and his time in Nevada is done. He leaves with a total record of 7-23.

I'm going to need to see who UNLV hires, but Arroyo went from 0-6 to 2-10 to 5-7. That seems to be moving things in the right direction at a place without a lot of success.

The move seems to have caught a lot of pundits and players by surprise given the school has just one winning season in the last twenty years. With a feeling that Arroyo was leading the program in the right direction, it remains to be seen what UNLV does with the position.

UNLV QB Harrison Bailey said in an interview that the players don’t know where to go from here.

“[I] really feel for Coach Arroyo,” Bailey said. “He’s one of the huge reasons I came here. He’s my dawg. Honestly, none of us really know where to go forward from now.”

With the college football team heading the right way, the question now is if UNLV could draw the coach it desires.

The facilities at the school are second to none, with a recent upgrade to facilities costing an approximate $40 million. A new NFL-style stadium a brief walk from campus will also be highlighted in the coaching search.

Everything seems set up for a new coach to have immediate success, but just who that will be is, as of now, a mystery.