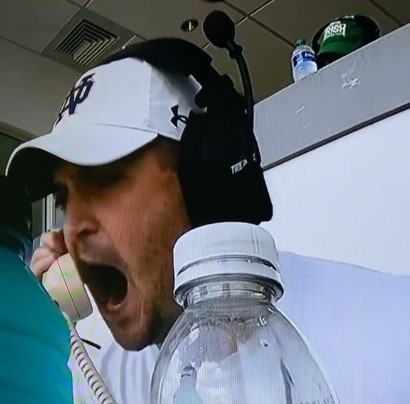 Notre Dame offensive coordinator, Tommy Rees caused quite the stir on Saturday when he was caught yelling at backup quarterback, Drew Pyne to ‘do his f***ing job’. Pyne was starting his first game of the season, replacing the injured Tyler Buchner.

How to relieve stress

Being an offensive coordinator at one of the top college football schools is a stressful job. Nevertheless, there are great ways to relieve some of that stress when the pressure is at its greatest. Why not just simply chew out and curse at the young kid who is starting the first game of his college career?

This is the route Notre Dame offensive coordinator, Tommy Rees took Saturday afternoon. On the receiving end of his tirade was redshirt sophomore backup quarterback, Drew Pyne. Pyne was making his first start in place of the injured Tyler Buchner.

It was halfway through the first quarter in a scoreless game when Rees seemingly lost his head. Pyne had been less than impressive to start the game and he was about to be told in no uncertain terms what was expected of him.

In a clip that’s now gone viral, the OC, Tommy Rees can be seen screaming into the phone. We aren’t expert lipreaders, but from what we can make out it seems as though he says,

While the whole country seemed to be up in arms about the dressing down, Pyne took it in his stride. Pyne said,

“I saw that video. Coach Rees, I tell him to be hard on me, I texted him this Sunday, and I said, ‘I want you to be very hard on me at practice. I’m going to treat practice like a game and I want you to as well.’ And that’s the standard he holds me to, and that’s what I asked for. I respond well to hard coaching.”

It seems to have worked, because Notre Dame ran out eventual 24-17 winners over California and Pyne did his f***ing job and threw the winning TD to Michael Mayer in the fourth quarter. Nice job, coach.