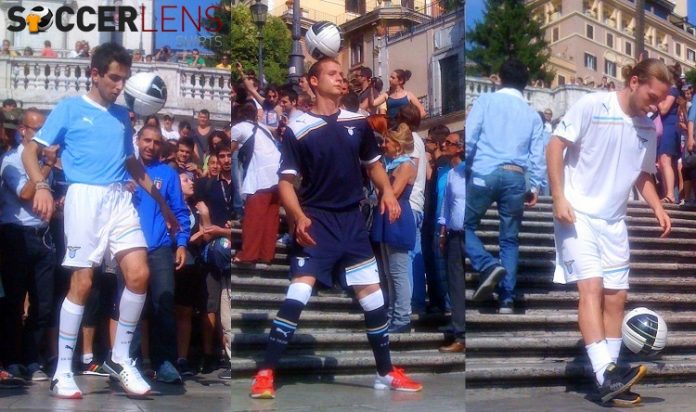 German sports goods manufacturer Puma supplies the kits for Rome based club. Lazio stood fifth last season above their fierce rivals Roma and both clubs have qualified for the 2011/12 UEFA Europa League play-off round.

The club president Claudio Lotito has claimed not to ‘sell’ the shirts to any brand and Lazio has been without a shirt sponsor for the last four years. But the news is, Lazio will be bearing the UNICEF logo in front of their shirts. Spanish club Barcelona had hosted UNICEF since 2006 until the end of this season.

Just like Barca, Lazio will not receive money from this deal, rather it will give a grant to UNICEF as did Barca.

Take a look at the home, away and third shirts:

The shirt is blue with a white collar. The shirts in the images do not carry the UNICEF logo. Lazio will wear white shorts with it.

Following the Puma King features, the away shirt is white with two diagonal stripes on the chest – one is blue and the other is gold. The away shorts will also be white.

The shirt follow the same design features as the away shirt but it is a dark blue shirt with white top and blue and gold diagonal stripes. The shorts will also be dark blue.