The Soccerlens Awards recognize excellence in football blogging. With help from our readers and editors, Soccerlens chose 14 awards categories (we’re definitely going to increase categories for next year as the football blogosphere expands) and nominated six candidates per category.

While putting these awards together was a labor of love (and I mean labor in both senses of the term!) it was well worth the effort. What we have here is a solid collection of the best football blogs in the world in some of the most important categories there are. It was no easy feat, but we sure hope you like the final product: 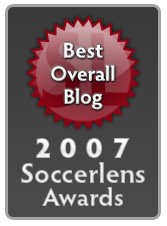 Readers’ Choice: Who Ate All The Pies

Pies has set the standard for alternative football blogging, offering a fresh and often humourous perspective on the beautiful game. From their video links to WAG features to their strong community, they have established themselves over the last year as one of the top blogs in the football niche.

Runner Up: The Offside

The Offside have assembled a fearsome collection of writers (some of the best, I should say) and as such cover the broadest spectrum of football while still maintaining a high standard of quality. 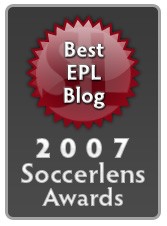 Readers’ Choice: The Run of Play

It’s rare to come across articulate bloggers, even rarer to meet articulate football fans. The Run of Play would be a worthy candidate for a host of awards and with memorable articles like these, it’s no wonder that Brian’s blog got the most votes in this year’s awards. If you’re looking for news on the Premier League and English football in general, you’ll be hard pressed to find a better blog than Run of Play.

Editors’ Choice: The Run Of Play and Sniffing The Touchline

Yes, AVFC Blog, Arseblog and EPL Talk are all bigger blogs with more following, community and history. Yes, all 3 are award-worthy blogs in their own right (so is the H list, mind you).

But the sheer quality of writing and insight on display at The Run Of Play and STT is amazing and a refreshing break from the tripe we are force-fed through our regular footy news channels (i.e. the ilk of BBC, Guardian and Sun). 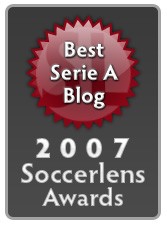 Regular in-depth coverage plus a focus on building a strong community has helped Anna build one of the best Serie A blogs around.

The Offside win another award – although Chris at Roma Offside has built an excellent following, the Italy section as a whole deserves recognition for the great work Martha and Chris have done to provide us with the best English-language coverage of Italian football online. 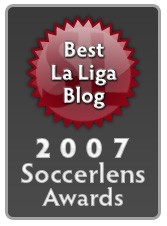 Nicholas Aldam’s FCB News blog has been the standard-bearer for quality Barcelona news since mid-2007 and he wins this award relatively comfortably. Here’s to hoping that he has more competition next year 🙂

Readers’ Choice: This Is American Soccer

Adam Spangler’s TIAS is the authoritative source on the MLS, with insightful commentary giving us, in Adam’s own words, a glimpse into the soul of American soccer.

Although not in consideration initially, a reader nominated The Offside Rules and once we had gone back and stacked other blogs up against TOR, only one or two stood out (remarkable given the high quality of bloggers writing about the MLS) and in our humble opinion, TOR truly is king of MLS bloggers. For 2007, at least.

Runner Up: The Fullback Files. 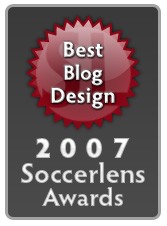 Other blogs may be prettier, but The Offside does an excellent job of showcasing the enormous amounts of content they produce on a daily basis and for that they thoroughly deserve this award.

Like The Offside, Pitch Invasion is another blog that goes beyond the simple chronological format that blog themes present and displays its articles and features in an intelligent, user-friendly way.

Runner Up: The Offside. 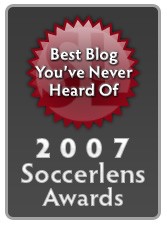 Readers’ Choice: The Run Of Play

There are many quality football blogs hovering under the radar but the Run Of Play was the pick of them all. A close contest with Ian’s 200 Percent here.

We’re big fans of Ian’s work, what with his detailed research and analysis of anything and everything football (here’s a glimpse). Surely he should’ve been picked up by a big media corp by now (as should many of the people mentioned here)?

Runner Up: The Run Of Play. 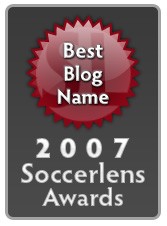 A Cultured Left Foot is an excellent blog featuring strong community and insightful analysis – and of all the names up for voting, it is the best combination of both having a name that matches the content of the blog and being memorable to boot.

Runner Up: Sniffing The Touchline

One of the toughest categories in the awards with some excellent names in the mix. As much as we like the idea of having our cultured left foot caught offside as the original winger in extra time with some people still on the pitch, it still doesn’t beat sniffing the touchline during the run of play sparking a pitch invasion. 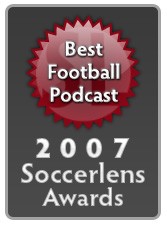 The Best Football Podcast Of 2007

Okey Doke Football is a great podcast featuring regular coverage of the latest and most important football news.

If Soccer Shout had still been around it would undoubtedly have been a strong contender but in its absence, the Arsecast wins this one for quality and following. 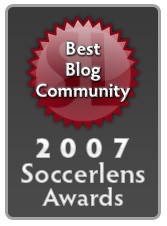 The Best Blog Community Of 2007

The Offside boasts coverage of a wide variety of news and thanks to this expanded focus they’ve created a strong community around their blogs.

Narrow-minded bollocks? Maybe. Most biased blog on the planet? Perhaps.

But one thing you cannot deny is the community value of Arseblog – where the Arsenal community is often considered the most active football community online, Arseblog towers above the rest. 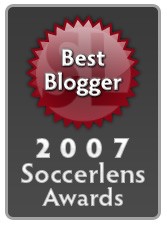 Chris from Roma Offside has developed a huge following because of his excellent blogging skills – his ability to go into great depths and still keep his audience interested is invaluable in an environment where most football writers aren’t worth the bytes they waste online.

With due respect to Chris, football’s also about entertainment. Chris is perhaps the better writer but when Laurie writes she entertains; and that is even rarer in football and blogging. 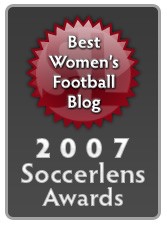 The Best Women’s Football Blog Of 2007

Kickster was started in late 2007 by a group of professional footy journalists but it has already taken the football blogging world by storm, providing quality coverage of women’s football. 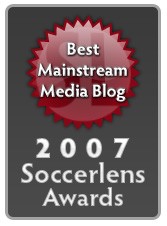 The Best Mainstream Media Blog Of 2007

The Guardian Football Blog is most popular and most developed blog in mainstream media, so it’s little surprise that they win here (it also helps that they ‘understand’ blogging and know (most of the time) what they’re talking about).

The Reuters soccer blog is better written than most football coverage (blog or mainstream), less prone to showing their bias and crucially, less prone to shoving their own narrative down the readers’ throats. Quality writers who understand blogging and can stay (relatively) impartial.

Steve Goff’s coverage at Soccer Insider is excellent (thanks in no small part to his sources) and a must-read for anyone interested in football. 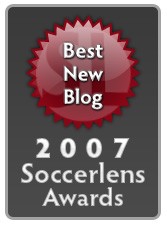 The Best New Football Blog Of 2007

We normally don’t see good Bundesliga coverage in English, but lucky for us, Bayern Lounge is a great exception. In the last year the Lounge has built up a great following and is the top source for Bayern Munich news.

Runner Up: My Anfield

Easily the best new blog started in 2007 (with due respect to the great work done at the Lounge, My Anfield and Red Rants).

Runner Up: The Spoiler

Honorable Mentions: Republik of Mancunia for their valiant ballot-stuffing, Pitch Invasion for being the best blog to miss out on the big nominations (overall blog, epl blog, best blogger) and Red Rants for missing out on the best new blog and best community nominations. You guys will be up next year, for sure.

A shout out to Randa Clay for her impressive design work (Randa did the award graphics).