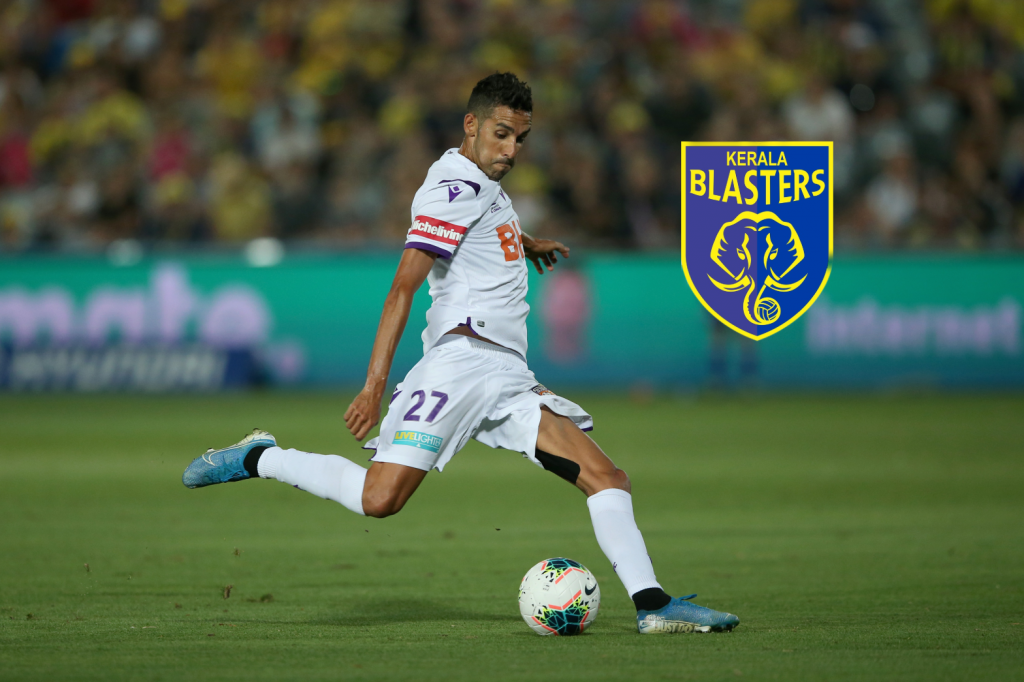 One of the reasons for Kerala Blasters’ poor showing so far this season is the long-term injury that key midfielder Sergio Cidoncha suffered against Chennaiyin FC in late November. Now, over a month later, they have signed his replacement, Juan de Dios Prados López. The Spanish midfielder started his career aged 19 at Real Betis, before moving to Granada on loan six years later. After stints with lower-division sides including Spezia in Spain, Belgium and Italy, the 34-year-old midfielder travelled to Australia to play for Perth Glory in 2018, winning the Players’ Player of the Year Award in both of his seasons in the A-League. His next move sees him cross the ocean once again, but he’ll stop in India to join Kerala Blasters. Here is what we can expect from him in the ISL:

Juande is a right-footed midfielder, however, he can also play as a centre-back, as he did for Perth Glory in the middle of a back-three. He mainly operates as a holding midfielder, meaning that his main role is to screen his side’s defence. Therefore, he is mainly a destroyer of opposition attacks rather than a creator for his side.

Being a holding midfielder, Juande’s main strengths are defensive in nature. In last season’s A-League, he averaged 2.7 clearances, 3.2 tackles and interceptions and 5.1 duels won per match. He’s quite reliable too, making just two errors leading to shots in his last two campaigns in Australia.

For a deep-lying midfielder, Juande is a solid player overall. His only notable weakness is carrying the ball forward, something he is not too good at. Last season, the Spanish midfielder completed only 0.2 dribbles and lost possession 10.1 times per game on average. However, this is not exactly the main part of his role, so it shouldn’t be a problem. One thing that Kerala Blasters should keep an eye on, however, is his fitness. The veteran midfielder is slightly injury-prone, and having not played a single minute of competitive football since August, they will need to ease him in to avoid a repeat of the Cido situation.

Considering the fact that Sergio Cidoncha is a more attacking midfielder, some eyebrows were raised when everyone learned that he would be replaced by a holding midfielder. However, this is a smart decision on Kerala Blasters’ part, as they already have one very good attacking midfielder in Facundo Pereyra, so that area didn’t need strengthening. With Juande in the side, Kerala Blasters will be able to field their recently used 4-2-3-1/4-4-1-1 variant with a solid midfield base. They have many options on the wings including Rahul KP, Nongdamba Naorem, Seityasen Singh and Sahal Abdul Samad, while up front, both Gary Hooper and Jordan Murray are available to do the job. Crucially, Kibu Vicuña will want solidity in midfield from Juande and Vicente Gómez. In midfield, Vicente Gómez will take care of the majority of the possession-based play, while Juande’s main role will be to screen the defence, especially with one of Bakary Koné or Costa Nhamoinesu set to be missing out due to the foreigner limit in the lineup, so either Sandeep Singh, Lalruatthara or Abdul Nediyodath will need to step up. Alternatively, Kerala could field both the defenders and play with an Indian striker, but that seems unlikely.

Juande clearly seems to be a very good defensive midfielder, who might hold the key to midfield solidity for the Kerala Blasters. If he can help achieve that, the Tuskers’ season might turn on its head, as the rest of the team certainly has the potential to do much better than a place in the wrong end of the table. Much depends on how he will be able to work with Vicente Gómez, but if the Spanish connection clicks, Kerala Blasters could transform into a very different side. Stats courtesy sofascore.com
Join our Telegram channel to stay up to date on breaking news coverage