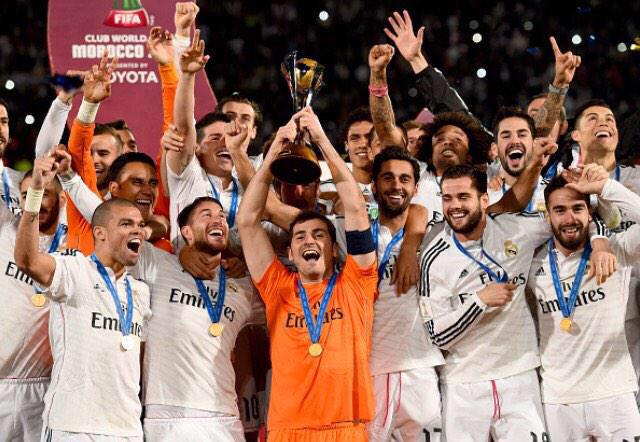 Real Madrid won 2014’s FIFA Club World Cup tournament with a tougher-than-expected 2-0 defeat of San Lorenzo. The Argentinian team played a very rough and physical game through out with the intention of stalling the game and stopping Real’s flow. A goal they achieved as the first 30 minutes rarely saw long stretches of time without a foul. After the 30th minute mark however Real stepped up the pressure and intensity to score their first goal thanks to the ‘Decima’ man Sergio Ramos. Ramos has now scored in the Champions League final and the Club World Cup final. His goal forced the well-organised San Lorenzo team to set out and attack (a bit). San Lorenzo though maintained their 4-1-4-1 formation while defending which succeeded in stifling Real’s full backs as they rarely found them selves free to go forward and exploit the spaces (not that their was much space to exploit). The 4-1-4-1 formation also managed to pack the centre of the pitch with enough players to pose a problem to Real’s creative outlets.

That, however, couldn’t stop Isco from picking out Bale in the early stages of the second half as the reigning European champions doubled their lead. From then on Real dropped their intensity significantly as they saw to ride out the game with a 2-0 lead. They where so superior to San Lorenzo that the first time Iker Casillas was tested was in the 84th minute. He was tested soon after that but those 2 shots were the only pieces of action Iker faced all night.

The night was particularly significant to some Real players like Gareth Bale, who scored in his 3rd final of 2014, only missing the net in the UEFA Super Cup in August (assisted a goal that night though). Also this night saw Iker Casillas make his 700th appearance which he cemented by being the first captain in history to lift La Liga, Copa del Rey, Supercopa, UEFA Super Cup, Champions League, and Club World Cup. Toni Kroos also finished 2014 with his 5th title, more than any other player. He certainly finished a year that he can be proud of. Finally the coach of the champions himself, Carlo Ancelotti, managed to set some records as he became the first Real coach to ever win 4 titles in 1 year, first Real coach to ever win the Club World Cup, first coach to win 51 matches in a year with a Spanish team, and finally first coach to manage a team who scored 178 goals in a calendar year. He certainly made his case for being selected as FIFA’s Coach of the Year a lot stronger.

Man of the Match – Toni Kroos

It was a close call between Kroos and Pepe but ultimately the German took the honours with a superb display that held Real madrid’s midfield through out the match even with San Lorenzo’s excessive violent tactics. He managed to distribute the ball efficiently yet creatively, pressed to win several balls (even the one that almost opened the scoring after 60 seconds), and contributed equally in defence and offence. Overall a complete display that comes the closest to perfect.