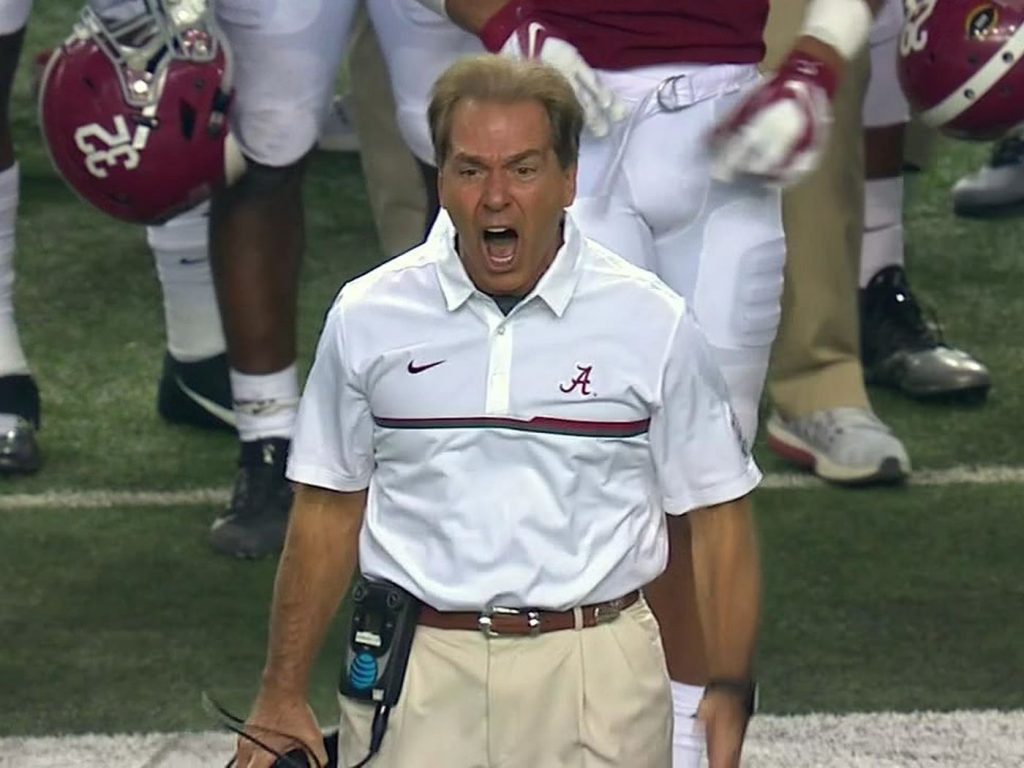 Alabama football head coach Nick Saban is generally good for a soundbite, and he did not disappoint on this week’s episode of ‘Hey Coach,’ a radio show interviewing Alabama head coaches from various sports. Saban spoke about his newfound calmness on the sideline and the ‘oh sh*t’ moment in football and in life. The Crimson Tide coach talked about plenty more too, including his friendship with Ole Miss coach Lane Kiffin, who he squares off against this week.

Talking about responding to adversity, Saban gave a glorious response, with some ‘French’ included.

“You know, we all have ‘oh sh*t’ moments in our life,” Saban said. “Something [bad] happens and you say ‘oh sh*t.’ Well, that happens in a game too. You fumble the ball, ‘oh sh*t, we gotta go out, play defense and get a stop, or whatever it is. We have those in life, we have those in games, and you have to be able to respond to them.”

Ticked off, cursing Nick Saban is back 👀 pic.twitter.com/hIZ2xF2jFF

In another portion of the show, Saban was asked by a caller why he is so calm on the sidelines and in press conferences these days.

“One of my first prayers in church on Sunday is to pray that I don’t get mad,” Saban said. “A lot of times when I do get mad, I do things I wish I hadn’t done, I say things I wished I wouldn’t have said and I don’t make really good decisions and choices.”

Saban also spoke about coaching individuals and how they react differently to different forms of man management. He did also have one more thing to add to his caller.

“If you think me acting up on the sidelines and breaking headsets is going to help us play better, I’ll sure as hell do it,” Saban said to laughter from the audience.

Nick Saban answers a fans question on why/how he's been so much calmer on the sidelines and press conferences this year.

Wait for the ending 😉

Saban was also asked about Ole Miss head coach Lane Kiffin. Alabama face Ole Miss this week and are expected to win according to the sportsbooks, but Saban was full of praise for his ex offensive coordinator.

“I liked working with Lane,” Saban said. “Lane is a great play caller and [has a] really great imagination. Really good on game day in terms of [how he] could see what the other team’s doing, and how they were playing plays. He immediately knew how to take advantage of it. Great play caller.”

Nick Saban with all kinds of rat poison for @Lane_Kiffin 😂 pic.twitter.com/N51DyWJ7xo

It’s always fun listening to Nick Saban and this was no different. Alabama squares off against Ole Miss on Saturday and we’ll see if Saban needs to break a headset.