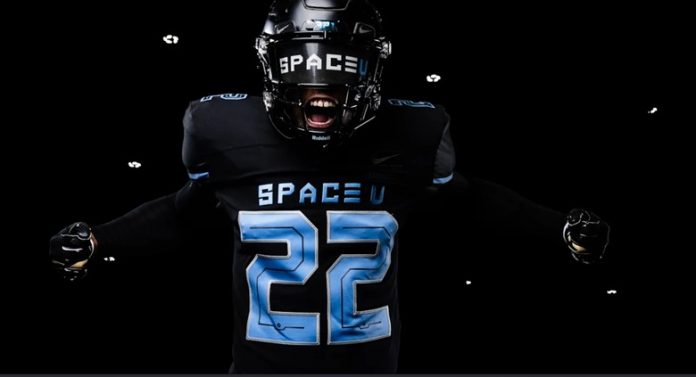 UCF hosts its annual Space Game on Thursday night against Temple. It will be the sixth such game and the program’s new jersey and uniform for the game have been revealed.

This is mission number six or Mission VI for the University of Central Florida. It will be the sixth time they have hosted a Space Game that commemorates the school’s ties with the Kennedy Space Center and Cape Caneveral Air Force Station.

The school changed its name to the University of Central Florida in 1978. Before that it was Florida Technological University and it’s main goal was helping the US space programs mentioned above.

It may just be a coincidence but UCF are 5-0 in those games.

The uniforms that the team will wear against Temple on Thursday in this year’s Space Game were dropped on Twitter on Tuesday and the reaction was an almost unanimous ‘OH HELL YEAH’. The jersey is black with ‘Canaveral blue’ numbers and the ‘Space U’ logo on the front.

According to the UCF website, the helmets are ‘anodized black’ and the darkest helmets the team has ever worn. Each helmet also features a patch that from ‘previous missions’ they were a part of.

The pants honor the Spitzer Space Telescope, which was used to find exoplanets UCF 1.01 and UCF 1.02. On the pants is a mission patch with the telescope included.

Check out the uniforms and the reveal video in the tweets below:

Coach Malzahn on the Uniforms

UCF head coach Gus Malzahn got a look at the uniforms over the weekend and it is safe to say coach was impressed.

“They look good to me,” Malzahn said. “I’m kind of boring, and all that. So if I like it, it’s probably pretty cool.”

Whether or not the uniforms will see UCF 6-0 in Space Games remains to be seen. Whatever the result, at least the players will look good on the field.