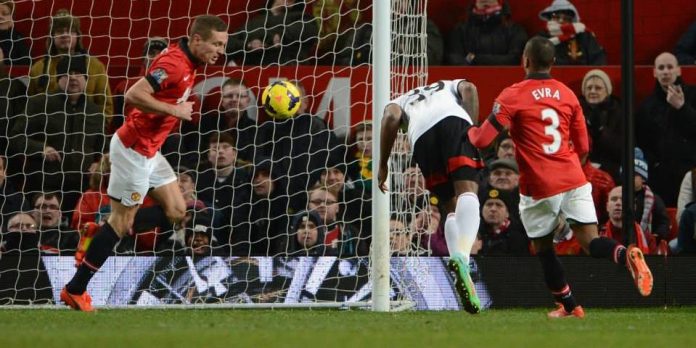 As if the result against Fulham on Sunday wasn’t galling enough for Manchester United supporters, hearing the opposition manager and a novice opponent voicing the same criticism that many of them have been hurling at manager David Moyes for most of the season, really is rubbing salt into very open wounds.

Having watched his team defend stoically as United put over 80 crosses, getting on for one for each of the ninety minutes into the Fulham box, former Manchester united coach, and now manager of Fulham, Rene Meulensteen described the Reds’ tactical approach as “straightforward” and amounting to no more than “get it wide, get it in.” It was a theme picked up by young Fulham centre back Dan Burn who likened the approach to that deployed by Conference teams. “I was just saying to the lads that I’ve never headed that many balls since the Conference,” said Fulham defender Dan Burn, who played at that level with Darlington. Burn added “But at the end of the day I’m happy for them to play like that. We knew that was going to happen. “Once we were dropping further back, we were going to get more compact and make them play around us because we thought we had the strength in numbers. I’m 6ft 7in. It helps when dealing with them sort of balls. They had plenty of crosses, loads of chances and stuff but the second goal was quite lucky. I always felt we had something left. It’s the first time I’ve played against Man U. It’s still a massive club and with the players they’ve got there, they know that they should be doing better.”

Burn later went on the Fulham website to insist that his comments were not meant to be disrespectful to Manchester United, and I’m sure they weren’t. It was just an honest appraisal that some PR-savvy person at Craven Cottage thought should be mitigated.

It has to be said of course that the observation clearly has merit. Stat-obsessed observers will have noted that Sky reported it was the record number of crosses played in the history of the Premier League. Given that their opponents had a six foot seven inch defender primed for such a challenge, and that for all of his many talents, the service that Robin van Persie would prefer is somewhat different to that of Peter Crouch, it may not have been the most productive tactic to deploy. Even at half-time when the folly appeared clearly to many observers, there didn’t seem to be much variation in approach. Einstein once defined the height of madness as doing the same thing over and over again, and expecting a different result. It seemed on Sunday that it was not a wisdom taken on board by the United coaching staff.

It is of course easy to pick holes in the approach of a team when the result goes against them. That said however, if Darren Bent hadn’t snaffled that “Fergie- time” equaliser, would the three points secured by United have merely papered over the cracks in their tactical approach?  David Moyes is coming under increasing scrutiny, especially by United fans as the season ticks by. On another day, United’s overwhelming pressure may have produced a comfortable win, but this was this day, and United’s fans still fear about tomorrow.