There has been a general uniformity in opinions that Manchester United need to strengthen their squad this January to get them back into the top-four reckoning, with the reigning champions languishing in seventh place currently.

One of their major areas for reinforcement is in the centre of midfield, where David Moyes’ men are lacking the creativity, energy and dynamism to go toe-to-toe with other top sides in the division.

The failure to add a number of top-drawer playmakers to the squad in the summer was well publicised, while efforts are believed to be thoroughly underway to find ‘the next Paul Scholes’ before the window slams shut at the end of the month.

One man that has been linked with a switch to Old Trafford in the past is Newcastle’s Yohan Cabaye, who continues to impress for the Tyneside club.

Despite rumblings of returning interest in the France international by the Manchester club, a report in The Guardian claims that Moyes will turn his attention to Juan Mata, rather than Cabaye, this month.

The former Everton tactician has stated that there will be no ‘panic buys’ during the window, and that the Red Devils will only look to bring the very best to Old Trafford.

The Guardian claim that Moyes has already ruled out a bid for Cabaye, with the ex-Lille lynchpin not deemed adequate enough in quality for the Manchester outfit.

However, could Moyes’ option to turn his back on the Newcastle man be a mistake?

It is fair to say that after a fantastic debut campaign at St James’ Park, Cabaye’s influence was not as keenly felt last season as Alan Pardew’s men struggled in the Premier League. 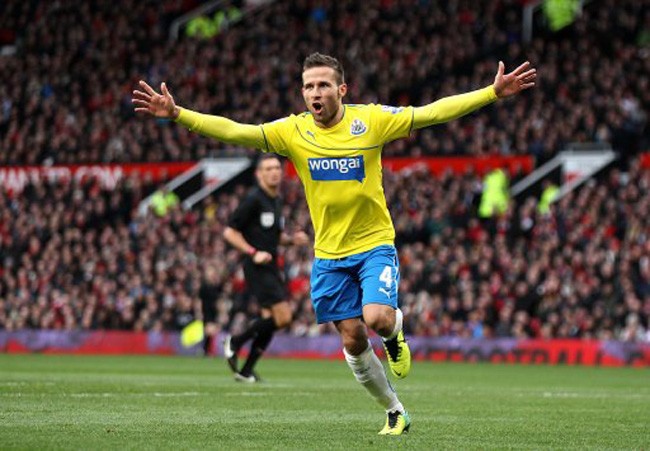 Despite controversy over a potential move to Arsenal in the summer, Cabaye has been back to his best this term and looked like one of the most accomplished all-round midfielders in England.

United got a glimpse of his immaculate passing range, positional acuteness and eye for the onion bag when Newcastle beat the reigning champions 1-0 at Old Trafford earlier this term. Not only did Cabaye score the winner, but with the Geordies dominating possession, the Frenchman was the heartbeat of the visitors’ ability to keep the ball.

United have found themselves embarrassed in efforts to sign top players like Cesc Fabregas, Thiago Alcantara, Sami Khedira and Daniele De Rossi, and may well have to make do with no-one this January.

However, with Cabaye playing at a side that will not be playing Champions League football any time soon and with a price tag in the region of £20 million, Moyes ruling out the Newcastle man could be the latest mistake from the new United boss.