In the past couple of days:

â€¢The Mexican league continued its commanding dominance in the Champions Cup — the most finalists in the history of the competition with thirty-two, twenty-three of which have won.

â€¢Costa Rica has also had a good record — in second place with ten finalists, six of which were also winners.

â€¢The Revolution win their second match of the season.

No MLS team has appeared in the final round of the CONCACAF Champions Cup since 2000, when the Los Angeles Galaxy defeated Olimpia of Honduras 3-2. 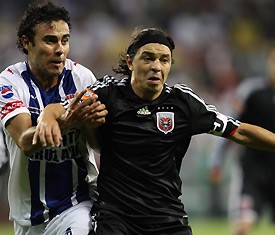 In our nation’s capital, DC United defeated Pachuca of Mexico 2-1, but lost on aggregate 2-3. Damian Alvarez scored the first goal of the match, for Pachuca in the 76th minute. In the 84th, DC substitute Rod Dyachenko scored off a cross from Fred, who also assisted on Franco Niell’s goal in the 90th. However, DC could not do any more in stoppage time, other than hoof the ball into the box from all angles and watch as the Pachuca defenders cleared the ball again and again. Statistical superiority in all offensive categories will indicate that DC gave their all, but it just wasn’t enough against the Cup holders, who obviously hold that distinction for a reason.

In the other semi-final, traveling to Estadio Saprissa was just as hard as anybody expected for Houston Dynamo, losing emphatically to the purple-clad hosts, 3-0 on the day, and also 3-0 on aggregate. Defensive errors and the opposition supporters were just too much for the Americans to deal with on the night. Add in the fact that Houston were missing three regular starters (Pat Onstad, Eddie Robinson, and Stuart Holden) through injury and one (Bobby Boswell) through suspension, and this match could have been over before it started. Goals in the 35th, 49th, and 77th minutes — scored by Armando Alonso, Celso Borges, and Jairo Arrieta, respectively — show the obvious dominance Saprissa had on the night. Not only did they dominate statistically (fifteen shots to Houston’s five) but also visually, controlling the match and deciding what happened and when it would happen.

In the only MLS match of the midweek, three first half goals, scored by two Gambians and a confused Kansas City player, allowed the New England Revolution to bury the Kansas City Wizards 3-1. The only Kansas City goal came from a penalty kick, and they would be left to rue their other wasted opportunities in the second half. 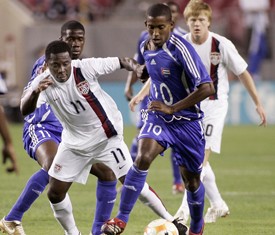 The Cuban refugees that I wrote about previously have been spotted on trial with the Los Angeles Galaxy. Jose Manual Miranda, Yordany Alvarez, and Yenier Bermudez are looking to add to the depth of Ruud Gullit’s squad after defecting from Cuba while in the US for Olympic Qualifiers last month. For a complete story, look here.

The Seattle MLS team now has a name, as voted on by the fans. After the electronic ballots were tallied, the fans overwhelmingly (eighty-two percent of the vote) chose the traditional name Seattle Sounders FC. Purists will be pleased, while those looking for a fresh start can still take solace in the fact that this will be the highest level of soccer ever played by a Seattle team. For the full story, visit this page.

There are no derbies this upcoming weekend, nor are there any matches of critical importance because the season is so young. However, in an MLS season, which is spread throughout the entire summer, and the only real goal for teams is to be in the top half of the conference for playoff qualification purposes, any team can beat any other team on any given day. The first Galaxy match of the season is proof of that. 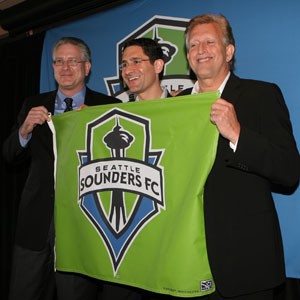 Some things to look for in this weekend’s MLS matches:

â€¢San Jose Earthquakes have not scored yet this season (although they have only played once), while Chicago Fire have scored five times in two matches and only conceded one goal. San Jose will need to get some production from its attack to change their fortunes.

â€¢Chivas USA has been under-performing also. If they expect to win the Supporters’ Shield, matches such as this weekend’s against Columbus Crew are must-wins.

â€¢Both New England Revolution and Kansas City Wizards have emerged as the teams to beat in the East at this early stage. New England faces an opponent in Colorado Rapids that are normally beatable, but have unpredictable surges (such as against Los Angeles) and Kansas City faces a formidable Houston Dynamo side who are hurting from their Champions Cup exit.

â€¢Los Angeles has to prove that they are not only the most popular team in the MLS (from a global standpoint) but also the best. They started off poorly against Colorado before beating rivals San Jose, and now face another must-win match, at home against Toronto FC, that they must win to gain a little dignity and credibility.

MLS teams had a disappointing midweek. This weekend proves to be another opportunity for teams to begin separating themselves from one another, although we are still a week away from me publishing the first table of the season. Only one match on national television in the US this weekend, but as always, fans can enjoy live match coverage at www.MLSlive.tv.