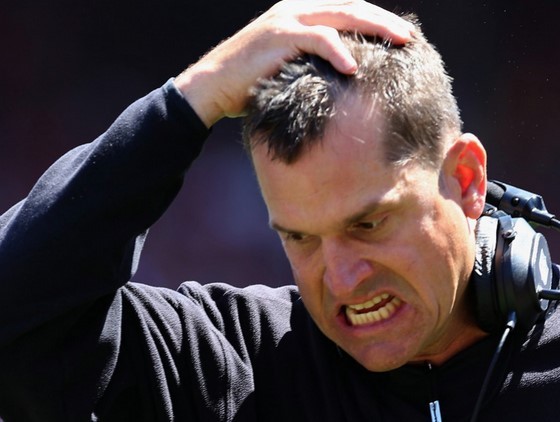 During last Saturday’s Michigan Wolverines’ win over Penn State there was a small scuffle in the tunnel. On Monday, Michigan head coach Jim Harbaugh blamed the opponent’s head coach, James Franklin for causing the half-time dust-up.

Michigan trounced Penn State a week ago on Saturday, but today during his press conference, Jim Harbaugh took a brief look back at the half-time shenanigans.

“Like you saw, pretty clearly, that [PSU players] completely stopped.” Harbaugh said. “They weren’t letting us get up the tunnel. And it just seemed like such a sophomoric ploy to try to keep us out of our locker rooms. And [James Franklin] looked like he was the ringleader of the whole thing.”

In his post game press conference, Franklin had said that he did not believe teams should leave the field at the same time to get to their locker rooms.

“All there has to be is a two-minute or minute buffer in between the two teams,” Franklin said in that press conference. “This team is in before that team gets close and however we want to do it. But we’re not the first team that’s had issues like that. To me, under the current structure, we won’t be the last.”

There were no reports of any altercations of a physical nature during the mini scuffle. However, there were some reports after the game that some sandwiches had been thrown at Wolverines players.

“I didn’t get a sandwich thrown at me, but R.J. [Moten] came up to me and said, ‘I just got hit with a PB&J in the face,'” Michigan lineman Trevor Keegan said after the game. “So, I guess they were. I didn’t see that, but that’s what he told me.”

Michigan hosts Michigan State on Saturday in what is sure to be another fiery affair.