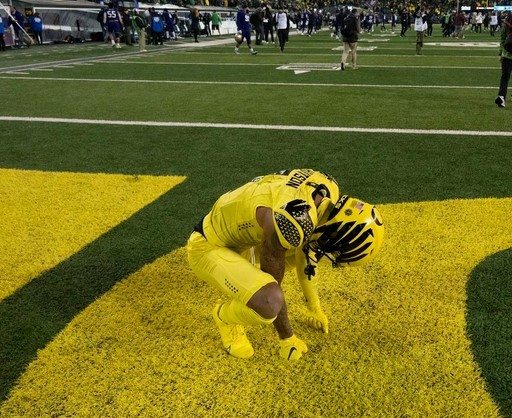 Oregon wide receiver Kris Hutson is either one of college football’s greatest trolls or his head coach Dan Lanning should ensure he never gives another post-practice interview again. In a three minute interview that surfaced on Wednesday, Hutson reveals that Bo Nix is ‘down’ and it’s ‘next man up’ for the Utah game. The Ducks receiver also said that his injury with six seconds left against Washington was ‘part of the gameplan’.

“Obviously, Bo is down, so it’s the next man up,” Hutson said. “[Ty Thompson is] good at decision-making. He has a great arm. He can extend plays. He’s learned a lot from Bo, so he’s kind of taken his game to the next level also. Ty is a good player, a great quarterback; very smart. I can’t wait to see him out there ready to go.”

His comments were enough to move the spread on the game five points, with Utah now favored by two.

While he gave away more than Oregon would have liked on Bo Nix’s status, what he said about the end of game situation against Washington might raise eyebrows at NCAA offices and elsewhere.

With six seconds left in the game, Hutson went down with an injury after getting a first down, essentially earning an extra timeout for the Ducks. When asked about his injury in the interview, Hutson said that he was fine and that his injury was ‘part of the gameplan’.

“It was a part of the gameplan,” Hutson said. “It was nothing too special. But I’m alright, though.”

When asked for comment on the injury, Oregon head coach Dan Lanning declined to comment. He did say that the Ducks were preparing with Bo Nix as the starter.