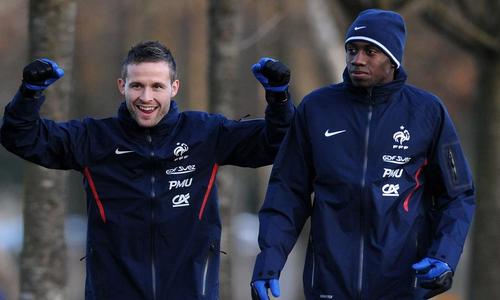 They came into the tournament lacking expectations, they were blessed with an easy group, and they didn’t fail to impress against Honduras (albeit helped by a red card). But there is a lot to be desired by the French, and there is a lot of inspiration in the side. While Karim Benzema was the talk and will continue to be so, that French midfield proposes a mouth-watering view.

The French managed to secure all three points against the Hondurans in a match they dominated, and certainly assisted by that Palacios red card. But that game gave us an idea of how the French will set-up in midfield, and while many will disagree, personal opinion is that Deschamps midfield men are (or can be) the best in the tournament.

The basic positioning is no different to what we see in the modern game with a midfield trio, but it is their style of play that is certainly effective as opposed to revolutionary. PSG duo Yohan Cabaye & Blaise Matuidi are part of the triplet with Juventus’ young man, Paul Pogba, completing the three.

Ex-Newcastle United man, Yohan Cabaye, takes his position in the deep central role. His job involves spreading the play and rotating possession. You won’t see him doing the overly spectacular, but pay close attention and he might just pull-off a tempting long ball leaving us in awe. Most of his passes are spread to the wide men, that mainly being the advancing full-backs in Patrice Evra & Matthieu Debuchy. Unless an opposition man is specifically tasked with marking Cabaye, and thus ignoring the threat of the other two, the deep playmaker will play a free-role, without being under any pressure and enough time on the ball to achieve a 90%+ pass completion rate. It’s a role that he is able to pull-off well, but one that restricts him from influencing play further forward, something he has grown to favour. An effective role then, but a restricted one.

Paul Pogba & Blaise Matuidi are positioned on either side of Cabaye in advanced roles. Here’s where the French midfield gets really interesting. The task of Pogba & Matuidi is essentially that of box-to-box midfielders, two strong individuals efficient at both ends. They help break-up play before the defence and Cabaye need to, and they also help in transferring possession from the deeper zones into the attacking side. Their task further evolves with their defensive contribution in wide areas.

With France’s attacking wide men essentially playing as strikers, their defensive contribution is naturally lacking. Add to this, the full-backs too play with an attacking mentality making the defence further short at the back and in wide areas. Pogba & Matuidi thus are required to keep the progress of the opposition wingers and full-backs in complete control, preventing them from having free space to run into.

Their role in the attacking third is purely of playing as the extra man in attack. As they make runs in from deeper areas, they remain fairly unmarked with the opposition defence pre-occupied with controlling the attackers. These free runs into space has been effective for both Pogba & Matuidi’s clubs and can be a solid tactic for the national team to employ as well. Note that there are suggestions Sissoko could start ahead of Pogba, but the role in principle will remain indifferent.

Now keeping this in mind, we must understand the importance this approach has to the Swiss game. Deep players like Inler & Behrami will be looking to contain the wide French attackers, and their contribution to handling France’s advanced central midfielders will be limited. Here’s where Sissoko could be important. The Newcastle midfielder can be a more potent defensive player, to defend against the likes of Shaqiri, than what Pogba would. Sissoko will be brought in, to provide cover for Debuchy, allow Valbuena to advance and prevent Ricardo Rodriguez whose two assists won Swiss the game, completely in control.

Stefan Lichtsteiner and Ricardo Rodriguez are a threatening attacking full-back partnership to have in the side, and arguably the most effective mode of attack for the Swiss side. It’s important that Deschamps looks at ways to control this Swiss attack as much as he looks to create attacks from his side as well. Sides are often guilty of not paying attention to the full-backs, do that against Hitzfeld’s side and you’re bound to be disappointed.

We may not be able to expect as expansive a performance from the French midfield as they did against Honduras, the focus will firmly be on defence, but the versatility in that central midfield zone is certainly recommended for viewers. Cabaye should have a key role in creating from the back, and a largely unmarked one, Matuidi and whoever is picked ahead of him will look to contain the wide attack & cover their own wide men, with a possibly lessened contribution in attack.

It certainly proposes to be an interesting game, with that French midfield could prove to be the difference. Cabaye’s set-up will be crucial in attack, while the other two midfielders (whether Pogba or Matuidi starts) will be instrumental in handling the Swiss attack.