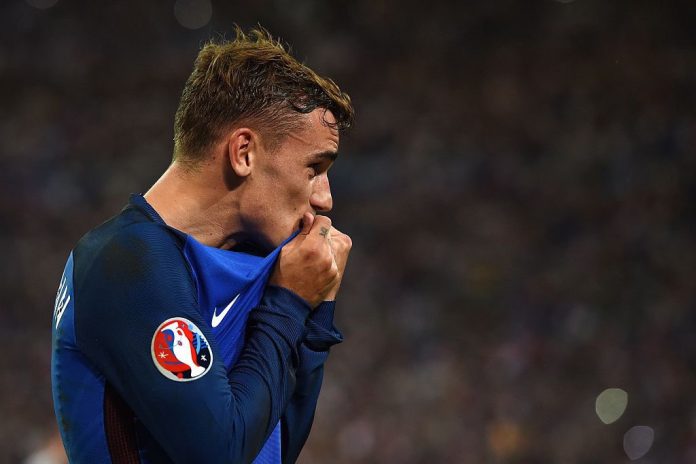 Antoine Griezmann scored both goals as hosts France beat Germany 2-0 in the second semi-final at Euro 2016.

The Atlético Madrid scored in each half to set up Sunday’s final with Portugal as the world champions failed to capitalise on all the possession and territory they had throughout the game.

Germany had two-thirds of the possession but could only force Hugo Lloris into a difficult save in stoppage time.  It is the fourth time in the last six major tournaments that they have fallen at this stage.

Joachim Löw’s side headed into the semi-final with Mats Hummels suspended, Sami Khedira and Mario Gómez both injured.  It was certainly the latter who they missed the most in Marseille as Thomas Müller failed to threaten up top – now 11 games without a single game in the European Championship for the Bayern Munich forward.

If there is one position Germany are lacking right now it is the striker role.  Löw had started the competition with Mario Götze unsuccessfully filling that role during the first two games before ending the competition without scoring in their last 145 minutes – 138 of those were without Mario Gómez on the field.  Indeed, Germany’s record in this tournament without the Beşiktaş striker is one they need to resolve before the World Cup in two years:

#GER with and without Mario Gomez at #Euro2016:

The hosts offered very little way of threat after the opening 10 minutes before Olivier Giroud beat Jérôme Boateng to a header on the halfway line to race through on goal.  Unfortunately for the Arsenal striker he wasn’t quick enough, allowing Benedikt Höwedes to get a block in.

However, Didier Deschamps’ side were gifted a chance in first-half stoppage time when referee Nicola Rizzoli adjudged Bastian Schweinsteiger to have deliberately handballed Patrice Evra’s flick-on from a Griezmann corner.  The Atléti forward coolly converted as the first half came to a close.  Like France, the first two goals Germany conceded this summer had both come from the penalty spot.

France defended excellently throughout the game as Hugo Lloris wasn’t greatly troubled very often at all.  Though the statistics say that the Tottenham Hotspur goalkeeper was forced into five saves, the only real test came in stoppage time from a Thomas Müller header.  Emre Can had drawn a decent save in the first half but nothing you wouldn’t expect a professional to make.

Kimmich had been largely at fault for France’s second when conceding possession inside his own penalty area to Paul Pogba.  The €120m Manchester United target then saw his cross flapped at by the usually-reliable Manuel Neuer to set up Griezmann for his second goal, with 18 minutes to go.

The German right-back on the night had been a great outlet down the right wing for much of the game but failed to create a single chance until the 92nd minute when his cross found Thomas Müller in the box, drawing an excellent save from Lloris.  No German player actually had more efforts on goal than the 21-year-old defender (4), though he failed to force Lloris into a single save.

Germany were made to rue their failure to create much of note, ending the tournament with only seven goals in their six matches.  They scored seven goals alone versus hosts Brazil in the 2014 World Cup semi-finals.

New Barcelona signing Samuel Umtiti had an excellent game at centre-back alongside Laurent Koscielny in only his second ever appearance for the French national team.  The 22-year-old made some excellent interceptions to keep Germany at bay throughout the game.

Newcastle United’s Moussa Sissoko offered great defensive support to Bacary Sagna down the right wing in a hardworking effort off the ball.  Credit must also go to Paul Pogba and Blaise Matuidi in the centre of the midfield too, preventing the likes of Toni Kroos and Mesut Özil having a big influence on the game.

France will head into Sunday’s final versus Portugal as favourites, looking to win their third European Championships to draw level with Germany and Spain in the process.  They have the opportunity to become the first nation since themselves back in 1984 to win the competition as hosts.

Meanwhile, Antoine Griezmann is three goals ahead of Cristiano Ronaldo, Dimitri Payet and Olivier Giroud in the running for the Golden Boot.  Only Michel Platini in 1984 has scored more goals (9) than the 25-year-old has in a single European Championship (6).