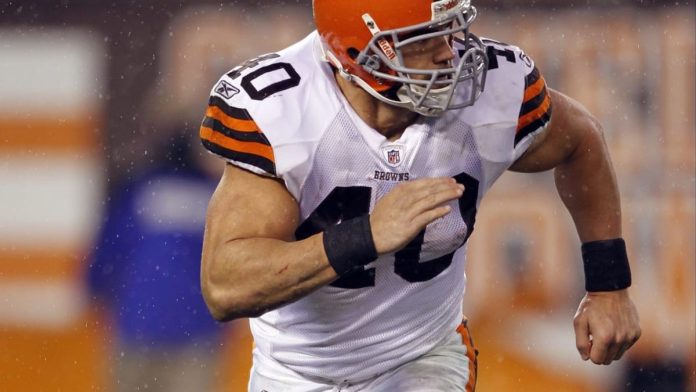 It has been a tough week for NFL fans, and it is not getting any easier. After the collapse of Damar Hamlin on MNF put him in critical condition, another former player is now also fighting for his life. Former Arkansas Razorback Peyton Hillis saved his children from drowning in the ocean in Pensacola, Florida on Thursday. However, Hillis is now in critical condition with lung and kidney issues. Hillis played in the NFL for numerous teams including the Denver Broncos, Cleveland Browns, and Kansas City Chiefs from 2008-2014.

Peyton Hillis is a real-life superhero. After seeing his children in trouble in the ocean off the coast of Florida, Hills without thinking twice leaped into action to save their lives. However, in doing so, the former NFL running back put his own life in danger. Former Arkansas Razorback running back Hillis is currently in intensive care with kidney and lung issues according to his family.

“I just wanted to let everyone know on Razorback Nation that Peyton is doing better,” Greg Hillis (Peyton’s uncle) said on his Facebook page. “He’s still in intensive care and having some problems with his kidneys and his lungs but the doctors say he is improving. I’m sure he would want everyone to know that he appreciates all of the prayers thrown up on his behalf!!!”

From overnight: Former #Browns RB Peyton Hillis is in critical condition after saving his kids from drowning.

His uncle says Hillis remains in critical condition in the ICU but he's doing better.

Thankfully the kids are alright 🙏 pic.twitter.com/1CBurDBEg5

Hillis was taken to hospital via helicopter after the incident. He currently remains unconscious in ICU. The children involved in the incident are believed to be in good condition.

During his playing days, Hillis played running back at the University of Arkansas. Hillis went on to the NFL where he plied his trade as a hard-nosed running back from 2008 until 2014. During that span, Hillis had periods at the Denver Broncos, the Cleveland Browns, Kansas City Chiefs, Tampa Bay Buccaneers, and the New York Giants.

Given how tough he was during his playing days, the hope is he shows his grit once again and pulls through this tragic incident.