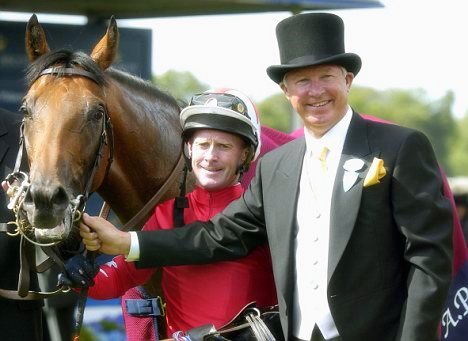 After 25 years in charge of Manchester United, Sir Alex Ferguson will go down in history as one of the best and most successful managers in the club’s history.

However, Ferguson was involved in a legal battle in the 2000’s over the ownership of prize-winning horse Rock of Gibraltar, in the one main blotch in his copybook.

A disagreement with co-owner John Magnier saw ugly scenes as a power struggle for the lucrative animal’s ownership ensued, which unfortunately has seen the Scottish coach’s name blighted slightly and opened him up to criticism over the controversy.

The Irish stallion, who claimed over £1.1 million in prize money in a distinguished career, was co-owned by the Manchester United boss and Sue Magnier, wife of racehorse breeder John Magnier.

The name of the animal comes from the island of Gibraltar in the Mediterranean Sea, which has been a point of contention between Great Britain and Spain in the past. Magnier, at the time the primary shareholder of Manchester United, gave half of the horse’s ownership rights to Ferguson, however the financial side of the horse’s ownership sparked a feud between the pair.

After Rock of Gibraltar retired, Ferguson felt that he was owed tens of millions of pounds in stud fees, with the football manager reportedly only being given a fraction of the money he felt was rightly his.

In 2003, Ferguson sued Magnier for the missing studs fees from Rock of Gibraltar, which won a record seven successive Group One races. With the case set for court, Magnier offered Ferguson the opportunity of four stud nominations a year for the rest of the horse’s life, however the Glasgow-born trainer decided to opt for a one-off £2.5 million payoff to end the feud.

This decision by Ferguson was later questioned by Martin Hannan, the author of the book Rock Of Gibraltar, who believes that the legendary United manager could have recuperated around £2 million-a-year if he has opted to keep half the breeding rights of the thoroughbred.

Magnier released his interests in the Old Trafford football club in 2005, when he sold his shares to American business tycoon Malcolm Glazier.

Since the ugly disagreement between Ferguson and Magnier, the manager has come in from criticism over his conduct, especially from former player Roy Keane. The temperamental Irish hardman and Ferguson were involved in a war of words in 2011, after Keane criticised United following their Champions League elimination at the hands of Basel.

After Ferguson has hit back, Keane accused the Scot of putting his own interests ahead of the club’s, stating the case of Rock of Gibraltar as a key example of selfishness.

The whole incident was shrouded in controversy, and thinking back Ferguson may well regret the actions that may have slightly tarnished his reputation at Old Trafford, and given critics such as Keane ammunition to attack him with. Despite this, the ability money to derail personal and financial relationships; after all it’s a horse-eat-horse world.