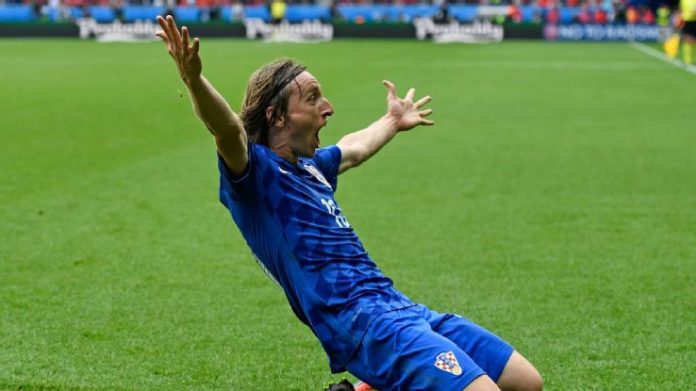 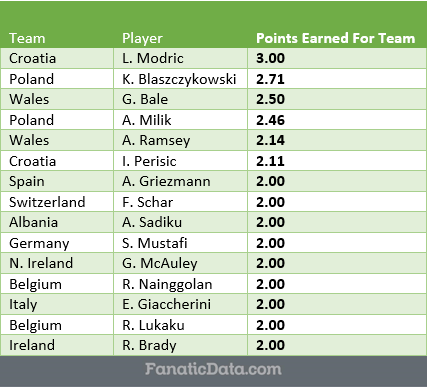 Croatian midfielder Luka Modric leads all players in most points earned for their nations.  The firecracker of a goal he scored versus Turkey was unaided and it was the only goal needed to win the match (watch the goal below).  As a result, he is the only player to have earned all 3 points for his side in any group stage match.

Looking at the overall picture, we see a relatively even positional distribution with 5 wingers, 4 strikers, 3 midfielders and 3 center-backs making up the Top 15.  There is also a good distribution of represented nations with 11 having at least one player in the Top 15.  We can expect this to change moving forward as teams continue to get eliminated.

@lm19official is the highest point earning player in #EURO2016 thus far due to this goal against #tur. pic.twitter.com/lJn3FCIZ5K

In the image below, you will find the highest scoring player at each position in the tournament to date (goalies not included).  We developed the starting squad based on a 4-5-1 formation; the most commonly used formation in Euro 2016. 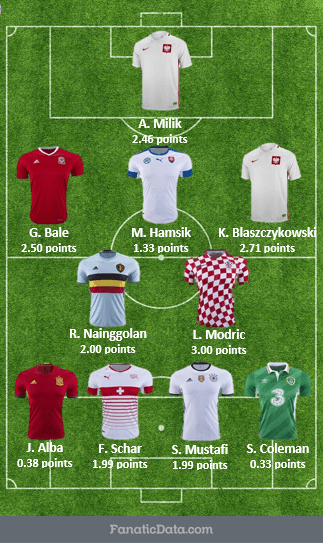 In this intriguing starting squad, we see 9 nations being represented.  Only Poland has more than one player representing its side.  While most of the players shown in the Top 15 Most Valuable Players ranking make up the starting squad, 3 positions have players not ranked.  Players in either the attacking midfield, left back or right back positions have not been very involved with scoring in the tournament to this point.  A lot of this can be credited to the tactics displayed by nations in Euro 2016 thus far.  Most of them have opted to put the offensive load on their wingers leading to full-backs staying back to defend more, as well as, making the primary role of the attacking midfielder to distribute the ball to the wingers.  It will be interesting to see if those tactics change at all once the knockout stages begin.

Our next update for the Most Valuable Players ranking in Euro 2016 will be when the semi-finalists are determined.  Stay tuned!