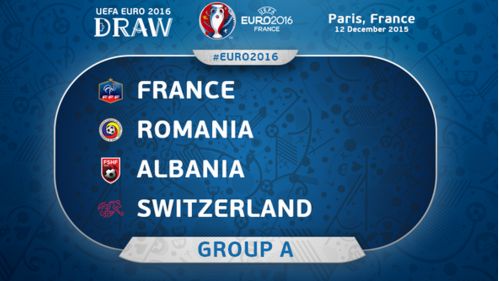 Although regular football season is over, we don’t need to fear and start requiring our daily dose of the most beautiful sport in the world. Why? The European Championship is starting in only 10 days. Summer is shaping up to be glorious, filled with new memories that will try to replace the ones we have from 2012.

Today, we will take an in-depth look at Group A of the competition. The four teams that share this group are France, Switzerland, Romania and Albania. Although history tells us that two clear favourites can be seen in that list, football is a magical thing and anything can happen.

Let’s start with France. The host nation did not have to qualify for the tournament and thus, we have to rely only on their performance in friendly matches. However, I haven’t seen a French National team with so much talent since the beginning of the century. France is an attacking team with an endless arsenal of players that can destroy almost any defence in the world. They have such a wide array of players that national coach, Didier Deschamps, even left Real Madrid’s striker, Karim Benzema, out of his list due to off-pitch situations.

This feels like a risky decision but when you look at the names in the French squad, there is no need to fear: free-kick master Payet, midfield maestro Pogba and up-rising star Coman are just a few of their weapons. The weak spot for France is their defence. In their last 11 friendlies, they conceded a total of 15 goals and kept a clean sheet only on 4 occasions. The 1998 World Champions defend by attacking, but this may prove to be a counterproductive method.

Romania is the second team in the group. Far from being that wonderful 1994 team plagued with starts, the Southeastern Europe nation is a strong side. They finished second in the qualifiers and did not lose one single match, making them the only team to beat the first place in that group, Northern Ireland. Romania conceded only twice during the qualifiers, making them the strongest defence of all. The boys in yellow will be playing the opening match against France and managing to draw or even win the match would make or break their tournament. Romania is not an attacking powerhouse and tends to rely on their defence and a structured attack to get the best out of their opponents, a strategy that has proven very useful for the team commanded by Anghel Iordanescu, since they haven’t lost a single match in their last 15 appearances.

Switzerland is normally one of the favourites to advance. With a dynamic style of play and a very strong team, they could take the top of the group. Switzerland finished second to England in the qualifiers and had a decent performance, but managed to lose 3 out of their 10 games; twice against England and once against Slovenia. This is not a bad result, considering both of those opponents eventually made it to the final round. The Swiss National Team managed to score 24 goals during the qualifiers, (11 of them being against San Marino). This goes to say that Switzerland does not have the attacking power they should with the line-up they have. If Switzerland manages to break the Euro course and actually score, they could be a force to be reckoned with. Switzerland has taken part in 3 European Championships and has always finished at the bottom of their group.

Finally, we get to Albania. For those that haven’t been following this national team, it would be easy to say that this is one of the teams that got it through the back door with these new 24 teams regulation. Well, you’d be wrong. Albania managed to kick Denmark out of the qualifying spots and remained second only to Portugal and the 2015 Ballon D’Or nominee, Cristiano Ronaldo. They even managed to beat them in Aveiro. This will be the first time Albania plays in a European Championship, but if they manage to do well against Romania and exploit Switzerland’s demons, they may well be on their way to make their first performance an enjoyable one. Who knows? If the stars align, they could take France out. We all remember the French squad breaking down randomly in major tournaments and Albania could capitalise on this.

France: Antoine Griezmann (Atlético Madrid)
Fuelled by an amazing season and a star-plagued midfield, the young player could finally establish himself as one of Europe’s greatest and assure that the cup stays in France. The fact that there is so much talent around him does not hurt one bit.

Romania: Vlad Chiricheș (Napoli)
Maintaining the number 1 spot regarding defence should be Romania’s priority and the Napoli defender is definitive choice for Iordanescu. Sometimes defence is the best attack. Remember Greece at the Euro 2004?

Switzerland: Breel Embolo (FC Basel)
A wunderkind without a doubt! At the tender age of 19, the Swiss could just be what Switzerland has been missing to finally make it through the stage group. He is surrounded by a very experienced and talented team that can break the European spell for Switzerland at last.

Albania: Lorik Cana (Nantes)
I have to go with the captain. A strong man with years of experience in major clubs and his National team that knows exactly what is expected of him. The number 5 is a magnificent leader and he showed it throughout Albania’s wonderful qualification process.

How could Group A develop?

France – Prediction – 1st Place: This is a tough one. France should come on top, due to their history and the fact they are the locals. I don’t see any team taking that away from them. But the French team has had dressing room problems in the past that lead to poor tournaments. I still believe France wins at least two of his games and ties or beats their third one.

Romania – Prediction – 2nd / 3rd Place: If they manage to keep a strong defence, they are golden. Today’s football relies heavily on this, look at Atlético Madrid’s Champion’s League campaign. Managing to keep France at bay, and even losing by one or two goals against them in the opening match will give them a great chance of advancing. If they can make it through the first sixty minutes without falling apart, it could be a good tournament for them.

Switzerland – Prediction – 2nd / 3rd Place: In theory, the Swiss should not encounter many problems and could even take the first place, but they are playing against their history and this matters. Don’t believe me? Ask Germany about playing against Italy. It’s difficult but the group they are in allows them to finally make it out of the group stage or at least don’t finish at the bottom for the first time. I see this happening, it’s all about keeping focused.

Albania – Prediction – 4th place: I want to root for the underdog, I really do, but I do not see this happening. Their first match is against Switzerland and their second one is against France, even if they were to get one point from any of these, they will be looking at a very difficult situation. They have written history by reaching this stage of the tournament and maybe they will continue to grow, but I do not see them getting to the knock-out stage, or even to the third place. However, they have nothing to lose and that can make a team very dangerous.

The key battle here will happen on June 15 at the Parc des Princes: Romania will face Switzerland and either create friction for the last two games or give a knock-out ticket out of Group A to both France and Switzerland.