As the popularity of the game grows in the United States and Canada, the MLS has been able to attract some big-name foreign players to ply their trade in North America, whilst simultaneously producing a star or two of their own. The MLS has recently released a list of the top-selling personalised player jerseys, with an unsurprising victor at the top of the list. The results were calculated from all Adidas jerseys sold through MLSGear.com, MLSGearCanada.ca or the official club websites.

David Beckham tops the list for the period between March 10 and September 10 of this year, and still holds the adoration and respect of supporters of the game in North America and all over the world. The veteran English midfielder looked increasingly likely to make a move back to Europe at the end of the last MLS season, but decided to resign for LA Galaxy, in what was a major coup for the game in the continent. Beckham continues to be a role model for aspiring players and has shown on the pitch that he still has what it takes to compete. 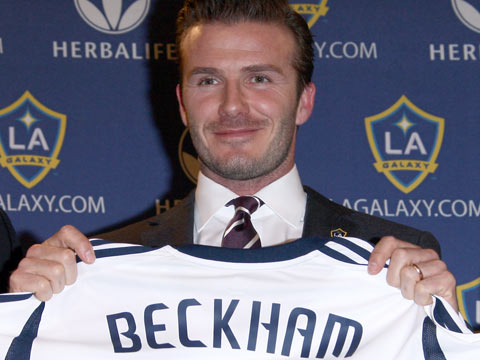 Second of the list comes big-name New York Red Bulls striker Thierry Henry. The former France international moved to the Big Apple from Barcelona in 2010 and has delighted crowds across the continent with his dazzling displays of skills, scintillating pace and sublime finishing. Given the calibre of Henry’s career at Arsenal, Barcelona and with Les Bleus, his continued presence in the game in the MLS can only be beneficial.

A home-grown hero comes into contention in third place, with Landon Donovan next up. The 30-year-old has had his forays into the European game with Bayer Leverkusen, Bayern Munich and Everton but has played the majority of his football in his homeland, and must as such be accredited as an overwhelming ambassador for the game in North America.

Seattle Sounders attacker Fredy Montero comes in at number four, whilst Dwayne De Rosario is Canada’s first representative in fifth place. Another home-grown icon in the form of San Jose Earthquakes forward Chris Wondolowski enters the fray in sixth place, and is clearly admired for this goalscoring abilities for the Buck Shaw Stadium side.

Two former Premier League players are next up on the list, with returning American hero Tim Cahill coming in at seventh place and Robbie Keane at eighth. Both these stars surely still have the ability to play at the highest level in England, and the fact they now represent MLS sides is a major bonus for the division. Other notable inclusions are Kris Boyd in 15th place, Freddy Adu in 20th and Chicago Fire’s veteran German defender Arne Friedrich in 25th.

The game in the United States and Canada is certainly heading in the right direction and the fans are as passionate and dedicated as anywhere in the world; long may it continue.