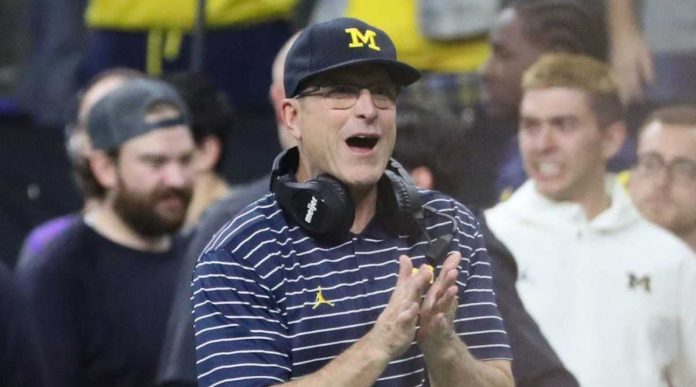 With Michigan’s season over and the Wolverines again coming up just short at the final hurdle, rumors are swirling that they could lose their head coach Jim Harbaugh to the NFL. In the hunt to sign Harbaugh as their next coach are the Denver Broncos and the Carolina Panthers. At this time, it is believed that Harbaugh is leaning more towards the Panthers since he likes the roster.

Jim Harbaugh may believe he has achieved all he can with Michigan. For the second season running, Michigan was knocked out in the semi-final of the College Football Playoff, ending their season. And from reports, it seems that Jim Harbaugh is getting the itch to join his brother, John, in the NFL again. John is the current coach of the Baltimore Ravens.

Jim was previously the coach of the San Francisco 49ers for four seasons before heading to Michigan in 2015. However, it is a couple of different teams that are vying for his services this time around.

The Carolina Panthers appear favorites if Harbaugh is to make the leap back to the professional realm. Harbaugh is said to prefer the Panthers roster to that of the Broncos and he would avoid superstar quarterbacks Patrick Mahomes and Justin Herbert in divisional play.

Sources say that Panthers owner David Tepper and Harbaugh had a conversation regarding the position that will be open come the end of the 2022 NFL season. They have not gone so far as to say that it was an interview. However, Tepper would likely have been looking to sell the Panthers to Harbaugh in that chat. They have plenty of draft capital and a reasonable young core to build around in Charlotte and Harbaugh has said he has “serious interest” in returning to the pro ranks.

Jim Harbaugh has been in contact with Panthers owner David Tepper about their head coaching job.

Tepper has said he would not hire a college coach again after Matt Rhule turned out to be a disaster. However, Harbaugh has NFL pedigree. In four years at the 49ers, Harbaugh’s record was an impressive 44-19-1.

The Panthers would still be required to interview two coaches from minorities because of the Rooney Rule. Current interim coach Steve Wilks would likely be one of those candidates.