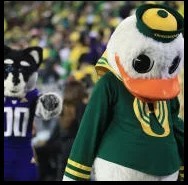 We are getting down to the real nitty-gritty of the college football season now. Just a couple of games remain for most teams and the rankings are beginning to take shape. This week’s AP Top 25 Poll potentially gives us a sneak peek at the College Football Playoff selection committee’s rankings, which are released Tuesday evening. In the latest AP Poll, LSU, Alabama and USC all move up a position or two after Oregon’s defeat to Washington on Saturday.

The top five NCAAF teams in the country made the job of the AP pollsters simple this week. They all won in reasonably comfortable fashion and no changes were necessary. Georgia, Ohio State, Michigan and TCU all went to 10-0 and occupy the CFP positions. Tennessee put up 66 points against Missouri and remain on the bubble in fifth.

Sixth ranked Oregon lost at home to Washington and the teams behind them all shuffled up a spot or two in the AP Poll. LSU and USC moved up a spot each into sixth and seventh respectively. Alabama and Clemson leaped two and three spots respectively and now occupy spots eight and nine. Utah rounds out the top ten.

Washington takes down Oregon to get its first win over a Top-10 opponent since 2018.

The 6th-ranked Ducks are the highest ranked team the Huskies have beaten since 2009 (beat No. 3 USC). pic.twitter.com/KBaScD5xPv

There is a huge week in store for the Pac-12 in week 12. Number seven USC will play at number 16 UCLA, while number 12 Oregon faces off against number 10 Utah. At least two more teams will be adding to their resume and trying to creep into the CFP spots.

The full rankings for the week 12 AP Top 25 Poll are as follows:

North Carolina State and Texas fell just out of the AP Poll this week. The official CFP rankings will be released on Tuesday evening.