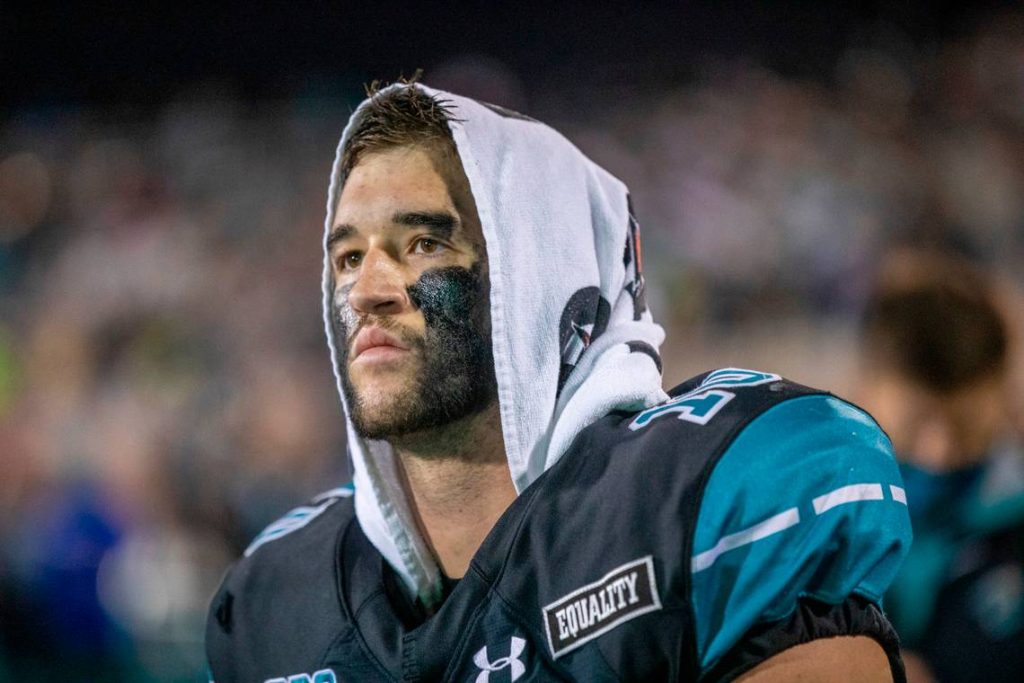 The Sun Belt’s best team, the Coastal Carolina Chanticleers will play the rest of the regular season without their starting quarterback Grayson McCall. McCall has been ruled out for 3-6 weeks with a foot injury sustained during last week’s game against Appalachian State. If the latter end of the timeframe is when McCall returns, he could potentially miss the Chanticleers’ bowl game.

Grayson McCall has been a sensation for Coastal Carolina over the past couple of years. The redshirt junior has twice won the Sun Belt’s Player of the Year award and holds the FBS record for passer efficiency rating at 207.6, which he set last year.

A look at the Grayson McCall injury… brutal. Hope he’s ok and can return ASAP pic.twitter.com/JtUhl7IoJ5

Unfrotunately for Coastal Carolina, a foot injury sustained against App State last week could rule their QB out for the season.

McCall’s injury will rule out the quarterback for 3-6 weeks. In the next three weeks the Chanticleers face Southern Miss, Virginia and James Madison. The sportsbooks still make them favorites this week, but the following two weeks could be challenging.

Should McCall end up missing the full six weeks, his season would be done. Unfortunately, that includes any bowl game Coastal would be invited to.

McCall is responsible for 25 TDs this season and has thrown 74 touchdowns to just seven interceptions since becoming the starter in 2020.

Carpenter or Guest to replace McCall

Bryce Carpenter or Jarrett Guest will have the unenviable task of filling McCall’s rather large shoes on Saturday. It was Carpenter who entered on Saturday when the QB went down.

A win on Saturday against Southern Mississippi would put Coastal Carolina in a good position in Group A of the Sun Belt. They are currently two games clear of James Madison and Georgia State but have played an extra conference game.

It could all come down to a clash with James Madison on the last day of the regular season for a chance to play in the championship game. Coastal will be hoping that whichever backup they select steps up to the plate and gives them that chance.