Hello SL readers and welcome to what I hope will become a regular feature here on the website. As a young and aspiring coach within the game I approached Ahmed with the idea of getting my views and analysis heard on the SL stage. He liked the idea and so here we are.

It has become an overused cliché, but for me, football really is the beautiful game; combining individual skill with tactical depth and levels of passion and excitement that cannot be found in any other walk of life. The game offers something different for everyone. My best mate loves going down the boozer, having a few pints and watching a top flight Premiership clash. For him that is football and indeed entertainment at its’ finest. Me? I enjoy nothing more than sitting in front of the TV with my pencil and notebook and making observations about a team’s particular attacking phase of play and how it would be more effective if their front man’s movement off the ball was a bit sharper.

Welcome to the world of a coach. Someone who analyses the game rather than observes it. Are all coaches the same? Absolutely not. The best mate I talked about earlier is head coach at a semi-professional under 18’s team, but quite frankly when watching the game on TV, his focus is purely on visual and emotional entertainment. Fair play. Me on the other hand, I love to scrutinize performances, study systems of play and generally try to educate myself about the game as much as possible. Such is it’s depth and variety, I could do it from now until I am 80 (23 today as it happens…) and I would still only have scratched the surface of knowledge.

How did *I* get into coaching? Injuries at 17 and 19 cut short any semblance of a playing career which I may have had and so for me the logical thing to do was to move into a coaching role. From a young age I had always maintained a pertinent interest in the tactical side of the game and as a player it was my strong suit. “He lacks pace, his first touch is crap, he can’t pass and he sure as hell couldn’t finish so much as a fish supper….but God he doesn’t half read the game well.” 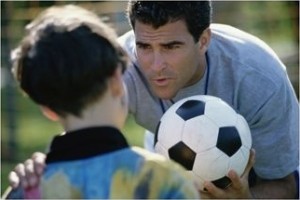 A question I get asked a lot is how people get into coaching; what steps they take to get involved with a club, how to go about obtaining qualifications and what experience they need as a player. My response is as simple as it is succinct. Just do it. The grassroots game in this country is crying out for volunteers and coaches to get out and get involved with a club. We can lament the lack of funds and quality of facilities all day long, but as important as they are, they can be overcome with sufficient personnel. After all it is the coach who is responsible for the transfer of knowledge, not state of the art changing rooms or shiny new Nike T90 footballs.

As luxurious and enjoyable as it is to train on a pitch reminiscent of a perfectly maintained bowling green, we must be realistic and prioritise. Top of the list is installing the right people with the correct modus operandi to take the game forward and ensure that it continues to develop for the years ahead. Opportunities in your local community will be vast; I can almost guarantee that any club you approach will welcome you with open arms. Like anything, the hardest thing is to take that first step into the unknown. Feel under-qualified or lacking ability? First and foremost if you have the right attitude and approach, then the rest will fall into place on the back of that; experience and knowledge come from making mistakes, moving on from then and most importantly from working with those people around you who have seen and done it all before.

One thing I will stress to all coaches is not to get hung up on the subject of their badges, or lack of, as the case may often be. As you progress and the higher level you wish to coach at, then yes you will obviously be required to obtain the relevant qualifications as a measure of ability and competency. However do not assume that coaching is all about badges, licences etc – there is so much more to being an effective coach than simply being able to say that you hold a UEFA B Licence.

Aside from that word of caution, badges and courses are still a great way of developing your own range of abilities. As you progress from Level One upwards, the range of study and course focus rightfully moves from the simplistic to the more advanced at a level which should challenge but not alienate the majority of students. The starting point for coaches (editor’s note: in Great Britain) is the FA Level One award – certain county FA’s may run Grassroots or Junior Leader awards but the first official step on the coaching ladder is with the Level One. From here you would progress to Level Two (UEFA C) through Three (UEFA B) and then upwards of your Level Four ‘A’ Licence, with most people finishing up here although some will invariably go on to complete the much lauded Pro Licence; a requirement for those wanting to manage at the highest level. 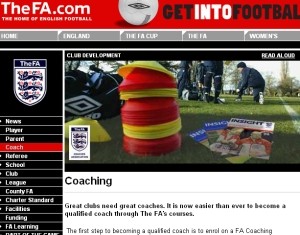 The FA’s official website is a very useful tool in gaining an insight into each of the levels and their various components. From here you can then look at any courses upcoming in your own area and how to go about enrolling. Level One is focused very much on providing an introduction to coaching; looking at organisation of sessions, player development, health and safety do’s and don’ts as well as involving some fun mini-games and drills which, speaking from experience, work well with all age groups.

Perhaps the most enjoyable aspect of any coaching course is the camaraderie and relationship which you will strike up with your peers; those individuals who are at the same stage as you are in their coaching career and who, generally but not always, have the same experience, skills and limitations. You work together when participating in your sessions, united with your passion for the game and desire to succeed. It’s truly a worthwhile experience.

If there is anyone out there who has read this article and felt motivated into doing something about their subconscious harbouring to become integrated into the football coaching society, then this has achieved something at the very least. To the rest of you I say give it a go. You might be surprised at what you find.