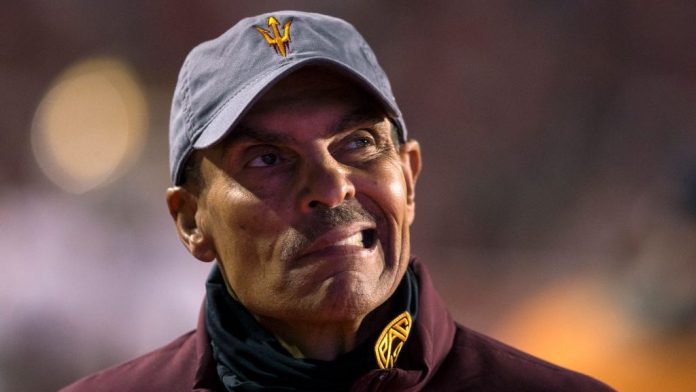 Eastern Michigan showed up at Sun Devil Stadium this weekend to play some football against Arizona State and collect $1.5 million for doing so. They left with a ‘W’ in what was the final nail in the coffin for Arizona State head coach, Herm Edwards.

Eastern Michigan closed as 20.5-point underdogs on Saturday night, but pulled off the upset and left Sun Devil Stadium stunned. In a game they never really looked winning, Arizona State and its coach paid the ultimate price. The university paid $1.5 million to EMU and Herm Edwards paid with his job.

Edwards’ record at ASU was around par for the course and he had held his own in the Pac-12 since his hire in late 2017. The highly charismatic coach left with a 26-20 overall record and a Sun Bowl victory in 2019. However, his on-field results likely had less to do with the parting of ways than the recent off-the-field drama.

During 2020, what should have been a dead period for recruiting, Herm Edwards and his assistants hosted high school recruits at Arizona State. During this time in-person recruiting was suspended, but virtual visits were allowed.

The NCAA were investigating Edwards and ASU hosting what many ex-ASU coaches described as regular visits. An anonymous staff member with knowledge of the visits said,

“It wasn’t a secret. They would bring in parents, their moms and dads and friends. They’d get a facility tour like they were on an official visit. They’d show you the weight room and training room. They would show you everything.”

The NCAA investigation is still ongoing, but five ASU coaches have departed since it was announced. The Sun Devils also lost 17 or so players to the transfer portal last season after news of the violations broke.

Who Can Replace Herm Edwards?

There are several names being thrown around as Herm Edwards’ replacement. It is believed the Sun Devils could try to lure Matt Rhule back to college football from the Carolina Panthers or go after current Georgia offensive coordinator, Todd Monken. Other names whose hat could be in the ring are Dan Mullen, Byron Leftwich and Bill O’Brien.