Worldwide football’s governing body, Fédération Internationale de Football Association (FIFA), seems to be losing its grip on the people and organizations that it purports to govern, footballers and their clubs. One event has the organization and its head, FIFA President Joseph S. Blatter, fuming and another is being cheerfully touted as leading the game into a “New Era”.

What’s got Sepp so upset now? No, its not foreigners infecting domestic leagues and national team football. What’s got everyone’s favorite Swiss teddy bear’s knickers in a bunch is the recent decision handed down by the Court of Arbitration for Sport (CAS), in the case of Scottish and Wigan defender Andy Webster.
.

Andy Webster, or: a new type of Bosman in the making

The former Hearts man was unsatisfied with riding the pine for the Edinburgh side, and even though he had another year left on his contract he decided that he would break with the club and transfer to Wigan. “How dare he?!!!”, I hear you gasp. Well, the audacious move to break his contract has now been sanctioned in the biggest case to impact the game since the European Court of Justice handed down its decision in Bosman.What Webster did was invoke Article 17 of the FIFA Regulations on the Status and Transfer of Players. The provision allows a player under the age of 28 to break his contract if he has completed at least three years of it and move on to another club (for players over 28 only two years). But what about a transfer fee? That’s the thing, since there is no longer a contract, Bosman applies and the transfer goes through on the free. 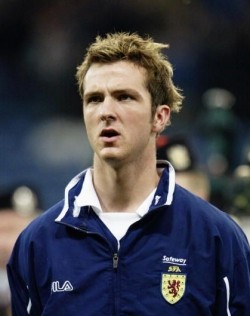 The new club and player in question do not get away that easily. There is still the matter, under traditional contract law, of the losses suffered by the original team due to the breach. In this case, Hearts claimed that they lost Webster’s market value, which they estimated at nearly £5 million. Much to their disappointment, FIFA’s Dispute Resolution Chamber only penalized Wigan and Webster for £625,000. But the parties weren’t through yet, both appealed to the CAS for their own reasons and it was found that the penalty should only be £150,000. The FIFPro website reported that, “The Court finds that there is no economic, moral or legal justification for a club to be able to claim the market value of a player as lost profit.”

CAS reached this number because it felt that Article 17 only allowed the Court to value the player’s residual value, based upon his salary for the remainder of his contract, NOT the player’s market value. This will have a tremendous impact on the functioning of the transfer market. Players that have completed the “protected period” of their contract (2 to 3 years) will have a 15 day window after the last game of the season to declare that they will be terminating their contract. This can also be used as leverage in the renegotiations of contracts.

This means that a player like Cristiano Ronaldo or Cesc Fabregas, while each has recently signed new contracts, could upon having reached the end of the protected period move to another club for only the residual contract value during the peak of their career. This clearly will strike, a huge blow to clubs in terms of the wild transfer fee demands that are placed on the heads of the world’s biggest stars. Sevilla would no longer be able to smoke crack and demand £44 million for Luis Fabiano. If he had fulfilled the requisite period and truly wanted to move on, he could do so, by arranging with his new club the payment of contract damages to his previous employer.

Blatter, a lawyer himself, is outraged by the decision. In his opinion, this is a severe blow to contract stability that was negotiated with the European Commission in 2001. He believes that the CAS incorrectly interpreted Article 17, by overlooking the clause, “compensation for the breach shall be calculated with due consideration for the law of the country concerned, the specificity of sport, and any other objective criteria”. I assume from the reports, that Blatter believes that specificity of the sport is meant to include far more remuneration than residual salary. I really hope that he doesn’t mean to suggest that the specificity of football as an industry includes the nature of the transfer market. The clause that follows requires that damages criteria be “objective”. As we all know, the transfer market is anything but objective. I think Sepp misses the mark here and FIFA only has themselves to blame for relying on such an ambiguous clause to protect contract stability.
.

More evidence of FIFA’s slipping hold on clubs and players, though less obvious, is the recent agreement between UEFA, FIFA, and Europe’s top clubs. I say less obvious because on its face it seems that all parties involved are walking away happy. UEFA’s website hails this as a “New Era” for the game. FIFA announced the deal as “Victory for football as a whole”. But will it really benefit everyone?The deal dissolved the heinous beast that was the G-14. No more threats of Europe’s top clubs breaking away and forming their own league. No more lawsuits against the governing bodies concerning club players’ international duty. But while it is claimed to be a move to bring the clubs under FIFA and UEFA’s governance, it seems more like the clubs are getting their way. 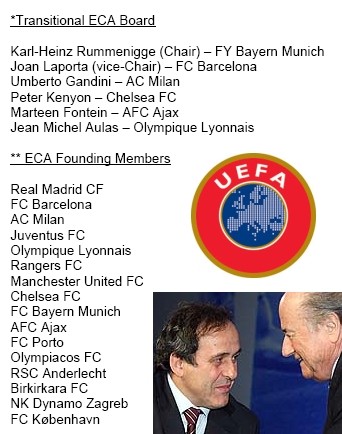 The governing bodies and the clubs have signed a letter of intent, which reaches the agreement that the G-14 will be abolished and in its place the European Club Association (ECA), which will be comprised of around 100 teams from across Europe’s 53 football federations. More importantly UEFA and FIFA offered to fork over in the area of £125 million worth of compensation to clubs for players that are taken from them for international duty for the European Championships and the World Cup. In return the G-14 clubs dropped their lawsuit against them. It was highly anticipated as being the next Bosman ruling, as the clubs brought the suit alleging the compulsion of international duty is contrary to the European Union’s competition and free movement of workers legislation.

The ECA will give the clubs a voice in the decisions that UEFA makes. President Michel Platini was pleased with the outcome, feeling self-assured saying, “After being elected and confronting the problems in football, I said that the game, that dialogue and the exchange of ideas was the solution”. The question is will this be a dialogue, or has the G-14 merely been given the official authority to throw its weight around and make demands? Who really stands to benefit from this agreement? Where do the majority of internationally capped players play? Answer: Europe’s biggest clubs, granted there are many more than just the 16 teams that comprised the G-14. So all you Derby County fans, who are still hoping in vain that there could be something that could save your club, this is not it my friends.

You don’t have to be a rocket scientist to realize that the former G-14 clubs must be pretty happy with their end of the bargain. They held the upper hand. On the verge of likely winning a landmark EU lawsuit, they must have gotten what they considered a pretty sweet deal for them to have folded their cards.

Much has yet to be revealed about the deal. How the ECA will function will be highly determinative of whether or not this is an agreement for everyone. The ECA board will be highly influential and it is yet to be seen how open that election process will be, or if the same big clubs will dominate its proceedings. Another excellent question posed by another blogger was where does the compensation money come from? Clearly it has to come out of FIFA and UEFA’s competition prize offerings and its campaigns to spread the joy of soccer around the world.

Both of these events are fresh. Their full impacts will not be realized for months, potentially years to come. But it is unclear who’s governing who? Players can tell their employers that they no longer feel like abiding by their contracts. Clubs can bully their governing bodies into huge financial settlement and a stronger voice in decision making.

Are these developments a good thing? Who should be telling who what to do? Players? Clubs? Associations? You tell me.

Also See: FIFA’s Regulations on the Status and Transfer of Players