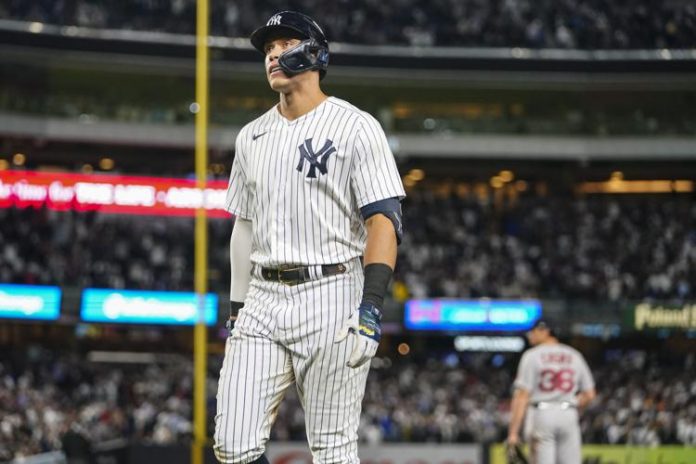 This Saturday’s college football coverage on ESPN and ABC was interrupted by Aaron Judge’s chase for the home run record. A split screen between the college football games and the Yankees game meant college football fans got shortchanged and lost their minds when their precious Saturday afternoon was taken over by baseball.

I’ll be the JUDGE of that

It is safe to say that fans of Auburn and Missouri didn’t take it well.

A tweet by user @B_Fisher_Smith shows the reaction from fans watching the game, many of whom are unimpressed. Some even going so far as saying, “F*** you ESPN.”

Pleading with the Judge

ESPN and ABC chose to ignore the criticism and cut back to the Yankees game for each at-bat. Commentary during that time was also focused on the baseball.

We are sure there were at least a few Cheetos heading towards TV screens at speed around the country. Some users pleaded for Judge to hit a home run already!

Others decided it best to vent at ESPN pleading with them to stop.

.@espn most of us don’t care about Aaron Judge chasing 61. No split screen please.

However, ESPN simply did not care. In fact, they went a step further and did it AGAIN during Monday Night Football Countdown.

And y’all just did it again on Monday Night Countdown

I don’t care about that. I would find the channel that it’s on if I wanted to see it

One of our favorite tweets came courtesy of @RedditCFB who made light of the situation. They replaced the Judge split screen with one of the Great British Bake Off and Paul Hollywood handing out a coveted handshake. It drew genuine belly laughs from us all here.

The best thing about ESPN coverage of college football is that now you don’t have to worry about missing big moments in other sports. pic.twitter.com/7Wd6bBUvjU

Overall, the reaction to these split screens was, err… not good. We stand with Twitter and urge the powers to be at ESPN to quit it!